Okay, that’s not entirely true. Also it’s not at all true. Armond White doesn’t count as somebody seriously for real liking JONAH HEX. But I’m a positive individual so I was trying to put a good spin on it. Believe it or not though I don’t have to delve into too much negativity for this review. JONAH HEX is not as bad as I was expecting, or as people have said. It definitely doesn’t work, but I don’t consider it a total abomination. It is beautiful in God’s eyes, it’s only on this earthly plane that it gets bullied because of its deformed face.
END_OF_DOCUMENT_TOKEN_TO_BE_REPLACED

It’s weird how the secret to a good movie idea sometimes is just to think of a really limited location and then figure out everything that could happen inside there. Like there’s that movie coming out where Ryan Reynolds is buried alive, and there was the one where Colin Farrell couldn’t leave the phone booth. There’s the building in DIE HARD, the bus in SPEED, the mall in DAWN OF THE DEAD, the hockey stadium in SUDDEN DEATH, and there should be one that takes place entirely in one of those Japanese compartment hotels. Or a nerd gets stuffed in his locker and then terrorists take over the school and he has to fight them from inside. Or a cartoon about a cat stuck in a tree and there’s a bird’s nest there and they’re forced to get along and learn from each other, like Lee Marvin and Toshiro Mifune in HELL IN THE PACIFIC.
END_OF_DOCUMENT_TOKEN_TO_BE_REPLACED 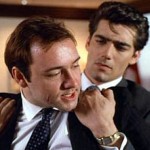 AMERICAN BEAUTY deals with the ugly sins and denial carefully buried beneath the manicured green lawns of a typical suburban neighborhood. A failed marriage, a daughter’s distrust of her parents, a father’s crush on her daughter’s underaged friend. The new neighbor (Chris Cooper) beats his pot dealing voyeurist son and ignores his emotionally disfigured wife. A failing real estate agent played by Annette Bening philosophizes about projecting an image of total success, but an emotional breakdown leads to her husband Lester (Kevin Spacey) quitting his job, taking up pot and systematically tearing down the perfect image of suburban happiness that his wife has so carefully constructed. Soon all hell breaks loose and a nasty splooge of anger and violence surfaces from beneath the façade. This sort of subject matter has been tackled many times before – we’re not exactly blowing the lid off of suburbia here – but it’s well executed and draws you in almost immediately. END_OF_DOCUMENT_TOKEN_TO_BE_REPLACED