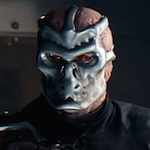 It opens with SE7EN-inspired credits over what looks like the Hell from fellow New Line Cinema movie SPAWN (fire and chains and ancient ruins) that transitions into veins and fluids in a bloodshot eye on which is reflected a doctor with a syringe that plunges into the rubbery rotten flesh of Jason Voorhees (Kane Hodder, STEEL FRONTIER), before the camera passes into the interior of his brain as the drug enters his bloodstream. I much prefer the title sequences of the earlier films, but this is an elaborate digital age one, and a fun way to set up the premise that Jason has been sedated, strapped and chained in an underground facility. (“Crystal Lake Research”!) We later learn they gave up after electrocution, gas, hanging and other execution methods proved inadequate for ending Jason’s life. END_OF_DOCUMENT_TOKEN_TO_BE_REPLACED

A couple of problems: the audience seemed kind of sick of Jason. And Cunningham (who had only really worked with Jason’s mom) had never really liked him anyway. So he hired 23-year-old recent film school graduate Adam Marcus, who did like Jason, but was excited to do a drastically different chapter – easily the least FRIDAY THE 13THy of any FRIDAY THE 13TH movie. Marcus has often claimed that Cunningham asked him to get rid of the hockey mask (an allegation Cunningham denies). Whatever the truth of it, the movie manages to have mask-wearing Jason in the opening and closing, but for most of the movie he body hops between ordinary non-scary-looking people wearing ties and stuff. Instead of working like the other FRIDAY THE 13THs, it’s sort of a re-enactment of THE HIDDEN with considerably less momentum, tension, style, production value, atmosphere, characterization, story, entertainment value or creature FX. But 100% more some parts with Jason. END_OF_DOCUMENT_TOKEN_TO_BE_REPLACED 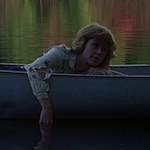 THE TIME HAS COME. I’m finally going to write about all the FRIDAY THE 13TH movies. I did one big review of the whole saga almost 13 years ago, so it’s time for a reboot. At long last I will review them separately, giving each one the focus it deserves – the type of one-on-one, individualized attention that the counselors failed to give poor Jason Voorhees while he was swimming on that fateful day, on account of they were having s-e-x. As far as I am aware no one else has shared opinions on these films before, especially on the internet, so I’m very proud to be breaking this ground, for the good of the community. At last, Jason’s story can be told.

Maybe part of the hangup in starting a series like this is that this first one is the hardest to write about. As a result of the weird choice to make Jason the killer in part 2, the smash hit cultural phenomenon original retroactively became somewhat disconnected from the rest of the series and much of what we associate with it. Like, when they said they were remaking FRIDAY THE 13TH, we knew that meant they were remaking the sequels to FRIDAY THE 13TH. In that favorite horror fan pastime of ranking the installments of a horror series, you gotta be a little hot-takey or at least personal-favoritey to not choose #1 as the best for the TEXAS CHAIN SAW MASSACRE, HALLOWEEN or A NIGHTMARE ON ELM STREET franchises, yet very few would do that for FRIDAY THE 13TH. By definition, if you’re a fan of the series you’re a fan of Jason, right? END_OF_DOCUMENT_TOKEN_TO_BE_REPLACED