A couple of problems: the audience seemed kind of sick of Jason. And Cunningham (who had only really worked with Jason’s mom) had never really liked him anyway. So he hired 23-year-old recent film school graduate Adam Marcus, who did like Jason, but was excited to do a drastically different chapter – easily the least FRIDAY THE 13THy of any FRIDAY THE 13TH movie. Marcus has often claimed that Cunningham asked him to get rid of the hockey mask (an allegation Cunningham denies). Whatever the truth of it, the movie manages to have mask-wearing Jason in the opening and closing, but for most of the movie he body hops between ordinary non-scary-looking people wearing ties and stuff. Instead of working like the other FRIDAY THE 13THs, it’s sort of a re-enactment of THE HIDDEN with considerably less momentum, tension, style, production value, atmosphere, characterization, story, entertainment value or creature FX. But 100% more some parts with Jason. END_OF_DOCUMENT_TOKEN_TO_BE_REPLACED 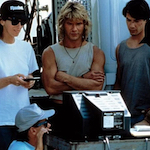 The choice that seemed crazy at the time, and prophetic now, was her insistence on casting Keanu Reeves as the college football legend turned overachieving FBI rookie Johnny Utah. By all accounts Bigelow had to fight for Reeves, because producers wanted someone else. That’s understandable – he’d been in the dark indie thriller RIVER’S EDGE and the period piece DANGEROUS LIAISONS, but was best known to the world as Ted from BILL & TED’S EXCELLENT ADVENTURE, with whom he inescapably shared a lovable stoner airhead sounding voice. On the other hand, when the movie was almost made by Ridley Scott a few years earlier he’d had Matthew Broderick in the role. You’re telling me that made more sense!? END_OF_DOCUMENT_TOKEN_TO_BE_REPLACED