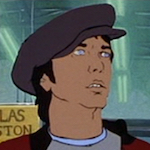 How’s this for a highfalutin premise: it’s about four generations of an immigrant family and how the history of American popular music weaves through their lives. It starts in Imperial Russia in the 1890s, with intertitles like a silent film, and ends with a stadium rock concert in the ‘80s, animated in a flashy style more inspired by music videos of the time. After young Zalmie Belinski’s rabbi father is killed by the Cossacks, he moves to New York City, where he hangs out backstage at a burlesque show, becomes the back half of a horse costume, then a clown, but wants to sing. The movie follows Zalmie and his descendants through World War I and II and Vietnam, through Vaudevillians, mobsters, beatniks, hippies, punks and, uh… Bob Seger. END_OF_DOCUMENT_TOKEN_TO_BE_REPLACED 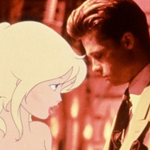 But even amid this gold rush I don’t think anybody expected a new movie by Ralph Bakshi, the iconoclastic animation rebel best known for the x-rated FRITZ THE CAT. Having started in Heckle & Jeckle cartoons, he founded a studio to do Rocket Robin Hood and Spider-man episodes, then forged a completely new path with personal, idiosyncratic, adults-only features like FRITZ, HEAVY TRAFFIC, COONSKIN (a controversial blaxploitation riff on SONG OF THE SOUTH) and HEY GOOD LOOKIN’. He also had a fantasy period with WIZARDS, the abbreviated LORD OF THE RINGS and the Frank Frazetta collaboration FIRE AND ICE, which had been his last feature way back in 1983. Several years back he’d made a small mark in television with an influential Mighty Mouse update, but that’s about it. He was as unlikely a candidate as any to direct a major summer release starring Kim Basinger. END_OF_DOCUMENT_TOKEN_TO_BE_REPLACED