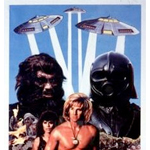 Like CONQUEST for Lucio Fulci, YOR is director Antonio Margheriti (SEVEN DEATHS IN THE CAT’S EYE, CODE NAME: WILD GEESE, CANNIBAL APOCALYPSE) trying to ride the wave of savage shirtless musclemen left in the wake of CONAN THE BARBARIAN. But this story combines the ax-wielding stone age warriors with futuristic sci-fi elements. In that aspect – and in Reb Brown’s blond wig and furry shorts and boots – YOR reminds me of He-Man and the Masters of the Universe, which started the year before. 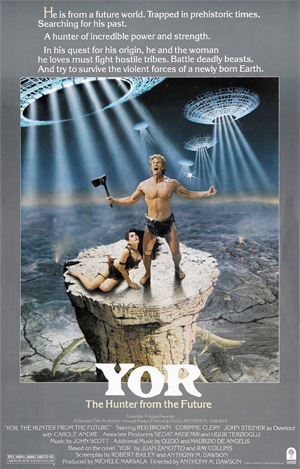 Brown (a few years after his two Captain America TV movies, around the time of UNCOMMON VALOR) stars as the titleistical hunter Yor, who travels alone through a rocky desert area portrayed by Turkey. One day he wanders past a village where he saves Ka-La (Corinne Clery, STORY OF O, MOONRAKER) and her dad (?) Pag (“Alan Collins,” a.k.a. Luciano Pigozzi, CASTLE OF THE LIVING DEAD, SARTANA IN THE VALLEY OF DEATH, ALL THE COLORS OF THE DARK, STRIKE COMMANDO) from a vicious triceratops. This scene not only brings together our main characters, but establishes the precise tone of goofy fun that the movie offers. It’s very enjoyable to watch this dinosaur munch on people because

2) it’s actually a very impressive effect because it seems to be some kind of full-sized puppet, and

3) also it’s kinda hilarious though because he’s stiff and inexpressive. Brown has a commentary track on the blu-ray where he helpfully explains “Now, there’s no CGI back then…”

Yor celebrates his achievements with the village, and Ka-La falls in love with him. But that night the village is attacked by a tribe called “the Blue Men,” who are not performance artists but merely dudes who have blue skin in the spots that aren’t covered by brown fur. They abduct most of the village and lock them in their cave, which has a big skull-shaped throne, so they seem to have pretty good taste, honestly. Yor’s theme song, “Yor’s World,” by Guido & Maurizio De Angelis (the songwriting team I’ve seen credited as “Oliver Onions” on other movies), plays as he attacks them using a dead bat/pterodactyl thing as a hang glider. That song is a definite highlight of the movie, likely made possible by Queen’s FLASH GORDON music. It plays at the beginning and then seems to pop up whenever something extra-goofy but awesome happens.

Yor floods the cave (pretty good miniature effects) and kills not only the Blue Men but all of the villagers besides Ka-La and Pag. Who cares about them anyway? They’re just extras.

Yor wears a medallion that reminds Ka-La and Pag of one worn by a woman named Roa (Ayshe Gul), so he goes to find her, hoping he can find answers to the eternal question What Is The Deal With My Existence? Roa also lives in a cave, this one protected and worshipped by a tribe called “The Sand-People,” whose trademark is they have long Y-shaped branches that they light on fire at the ends. Yor and Roa, both being blond and having medallions, believe they are of the same lost race. They immediately fall for each other, but her guys aren’t gonna let her leave, so they have to fight their way out.

Yor is such a dumbass because it could not possibly be more obvious that Ka-La is super fucking jealous of this blond lady he’s suddenly getting with, but he acts completely oblivious. Pag thinks she’s being silly because their tribe believes in polygamy, but come on, dude. Luckily, before Ka-La can murder Roa they get attacked by some more hairy blue guys and they try to work together but Roa doesn’t make it. Problem solved.

Except now they find another village where Yor saves a younger and even hotter woman from another (not necessarily younger or hotter) dinosaur. And the girl’s father explains that since Yor saved her life she now belongs to him as his wife. And Ka-La is like jesus christ I cannot catch a fucking break, can I?

But luckily Yor has grown up a little, realizes he wants to be exclusive with Ka-La, and turns the offer down. Phew.

And then, lasers! See, this tribe brings Yor to see a weird sci-fi type device they found in a cave. Suddenly a space ship is blowing up the village. And THE BIG FUCKING TWIST is actually not that he has time travelled from the future or something like that, but more of a PLANET OF THE APES maneuver (spoiler for PLANET OF THE APES) where this is in fact a post-apocalyptic future where the well-to-do survivors remain in a base and don’t help the primitive poors out there on their own fighting dinos. Yor was there as a child but his parents were rebels trying to escape and they crashed their ship.

The survivors are led by Overlord (John Steiner, CALIGULA, TENEBRAE) whose dearest wish is to make clones of Yor that are compliant to him. For now he has black robot troopers with helmets shaped like Darth Vader’s on the back. A rebellious scientist named Ena (Carole Andre, DEATH IN VENICE) teams with Yor and friends and they try to blow up the Overlord’s nuclear stockpile. Yor somehow intuits how to use laser guns when they’re given to him, but his spear skills also come in handy. Unfortunately the sci-fi part of this is as bland as they come – dudes in robes living in basically an industrial plant – but there is one absolutely amazing part where Yor and Pag have to do a trapeze act to get across a thing, and some of the shots just look like GI Joe dolls, and the theme song plays again.

I wish they didn’t shit the bed so bad when they got to the sci-fi part, but the premise is cool. Talk about wealth inequality! Most of the world is running around in loin cloths, living in huts, hunting dinosaurs with spears, interpreting machines as gods and fire birds. (Some of them do still know words like “substance,” “machine” and “physically,” though.) Meanwhile, these people are in a high tech lair building robots and shit. To be fair, their lifestyle doesn’t look fun at all, even if it’s more comfortable.

I have to wonder, is the Overlord supposed to be correct that Yor is “genetically perfect”? The movie is obviously against his plan of a master race of controllable clones, but it does seem to treat Yor as superior to the others from birth. We’re never told of him being adopted after losing his parents, but he sees footage of himself as fully grown Reb Brown and says “I remember that. That’s when I was learning to hunt.” Which seems to indicate that he lived on his own for maybe 25 years and grew into a muscleman while, what, picking berries? Maybe he found some soy beans?

And somehow without any training or technology from the island his self-taught-as-an-adult hunting skills are so much better than all the other primitives that everyone is in awe of him when he kills dinosaurs and stuff. And Ka-La asks “Why is Yor so different from the other men?”

I don’t know. I guess he’s just the man. The song is pretty clear about him being the man. 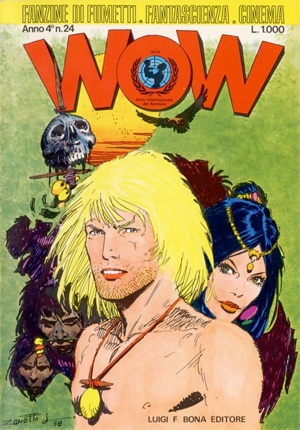 The credits say YOR is based on a book by Ray Collins, which apparently refers to a 1974 Argentinian comic book serial written by a pseudonymous Eugenio Juan Zappietro and drawn by Juan Zanotto (who once drew The Phantom). If Wikipedia can be believed, “The film differs from the comics where the second part of the film begins to resemble STAR WARS.” Does that mean the entire premise of the movie is not from the source material? I think maybe it’s just a variation. A separate entry on the comic says it takes place in the Neolithic Age, but does mention “the last survivors of a very advanced civilization which is now on the verge of extinction.” So, not in the future, but similar clash between primitive and advanced civilizations.

I know people who have seen a bootleg of the mini-series, but I’m unclear if it actually aired at the time, since there was a 98 minute Italian theatrical version. I watched the 89 minute version on the Mill Creek blu-ray. Brown’s commentary track is not very informative, but pretty affable, talking about how fun it was and how he did 1,000 pushups a day. It’s one of those things where he knows from meeting people at conventions that there are people who love this, and he doesn’t seem to grasp why, but assumes they know what they’re doing and appreciates them.

This is actually a movie that I would love to see remade or ripped off. I am hopeful that the great barbarians-meet-advanced-civilization movie of our lifetime has not yet been made.

Antonio Margheriti barbarians Corrine Clery dinosaurs Luciano Pigozzi Oliver Onions Reb Brown
This entry was posted on Monday, September 2nd, 2019 at 12:17 pm and is filed under Comic strips/Super heroes, Fantasy/Swords, Reviews, Science Fiction and Space Shit. You can follow any responses to this entry through the RSS 2.0 feed. You can skip to the end and leave a response. Pinging is currently not allowed.

11 Responses to “Yor, the Hunter from the Future”