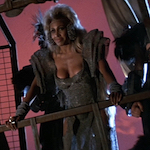 It’s very much an Australian production, and a continuation of Miller’s previous films. The stunt coordinator is the legendary Australian stuntman Grant Page, who we also know from his parts in THE MAN FROM HONG KONG, DEATH CHEATERS, STUNT ROCK and ROAD GAMES. Cinematographer Dean Semler, co-writer Terry Hayes, art director Graham “Grace” Walker (now production designer) and costume designer Norma Moriceau, among others, returned from THE ROAD WARRIOR. But in the four years between MAXes, Miller had some dalliances with Hollywood, and THUNDERDOME does seem aware of its place in a blockbuster landscape largely shaped by fellow TWILIGHT ZONE: THE MOVIE segment director Steven Spielberg and friends. According to the Mad Max wiki, “on one wall [of the Bartertown set], there’s a picture of a Gremlin. Not far away, the feed and grain store has a few words painted over its front entrance – ‘Proprietor: E.T. Spielberg’.” END_OF_DOCUMENT_TOKEN_TO_BE_REPLACED 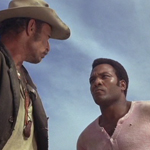 Just kidding, he can refuse! He’s already been through that whole suicide mission thing before in THE DIRTY DOZEN. This time he breaks his chains, shoves the papers in the captain’s mouth and escapes. This is one badass reversal of expectations I’m gonna assume belongs to Larry Cohen (RETURN OF THE MAGNIFICENT SEVEN), who’s credited as screenwriter along with Steven Carabatsos (TENTACLES, HOT PURSUIT). Luke is a Han Solo who stays selfish. Instead of fucking around with war shit and learning a greater cause, he goes on his own mission to try to get Emperor Maximilian’s gold that, according to legend, is in the El Condor fortress, protected by the strongman Chavez (Patrick O’Neal, SILENT NIGHT BLOODY NIGHT, THE STUFF, UNDER SIEGE). END_OF_DOCUMENT_TOKEN_TO_BE_REPLACED