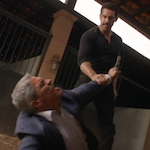 This one is closer to the latter – another story about a guy single-handedly taking on cartels to protect his family. This time it’s more like a Hollywood thriller, more emphasis on the high concept and complex action sequences than martial arts. He’s kind of a JOHN WICK, settled down as a widower raising his teenage son Taylor (Matthew Garbacz) and running a cyber security firm from a beautiful home in Mexico, when his secret past as an infamous CIA and/or MI5 commando called “Nero” comes roaring back. END_OF_DOCUMENT_TOKEN_TO_BE_REPLACED