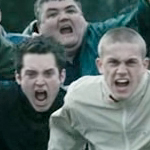 GREEN STREET HOOLIGANS (as we call GREEN STREET in America) is a very watchable but meat-headed movie about assholes (as we call cunts in America) obsessed with soccer (as we call soccer in America) and exploiting the American fascination with English exoticism. Elijah Wood (THE HOBBIT: AN UNEXPECTED JOURNEY Extended Edition Blu-Ray + Blu-Ray 3D + UltraViolet Digital Copy combo pack) plays Matt Buckner, a young writer who gets unfairly expelled from Harvard and decides to go visit his sister (Claire Forlani, POLICE ACADEMY: MISSION TO MOSCOW) and her family in London. His brother-in-law Steve (Marc Warren) wants to get rid of him so he sends him to a soccer game with his little brother Petey (Charlie Hunnam). So they go out to drink beer and sing songs with the fellas and then go to the game. END_OF_DOCUMENT_TOKEN_TO_BE_REPLACED