Everybody describes Max as this scary guy – they think he never sleeps, and at one point a guy compares interaction to him with kids holding their breath as they walk past a graveyard. But Wahlberg is in his regular grimacing badass mode. He’s cool but the way they talk about him he should be a walking mess of a man, not just a sculpted tough guy who doesn’t smile. Oh well. 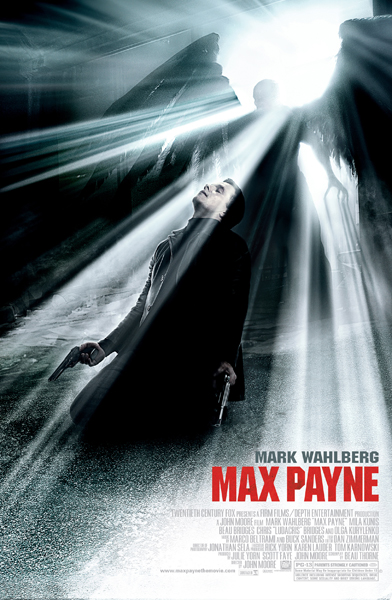 There’s a good scene early on where three junkies try to jump Max in a public restroom and are disturbed to find that he knows their names and what they’ve been doing all day. “You’re following us?” one of them says. “No, I’m following you,” he says. Ass kicking ensues. Another nice touch in this scene: he takes the guy’s gun but instead of firing it at him he throws it in the sink and pulls out his own, more powerful gun.

But as the mystery begins to unfold we start to see musclemen with ritualistic tattoos and shadowy demons chasing after people. In the end it turns out to have a reasonable explanation but at the time you worry this is some kind of CONSTANTINE type deal. Unfortunately the character and action scenes are only about halfway there and the mystery isn’t involving enough to fill the gap.

This is one of those movies where at the end there’s a credit sequence that seems like it was designed to go at the beginning. As the names appear, flames noisily spray across the screen, things explode into sparks, bullets fly past. The title of the movie racks itself and ejects a bullet casing. I always enjoy credits that explode or bleed, but isn’t that a little dishonest for a movie that was originally released PG-13? Anyway, I’m glad they saved it for the end because this way I was able to be surprised and laugh every time an unexpected actor showed up: Mila Kunis from FORGETTING SARAH MARSHALL as a tough Russian mafia girl (not sure if wearing sunglasses is enough to make that convincing), BATMAN AND ROBIN’s Chris O’Donnel as a corporate drone, Screen Actor’s Guild award winner Chris “Ludacris” Bridges as a police detective, Beau Bridges as a character named “B.B.” which I will go ahead and assume stands for “Beau Bridges” and that this is a 100% factual re-creation of events from his actual life. Bridges is a nice old friend of Max’s, so I’ll let you guess whether he will die horribly for helping Max or whether he will turn out to be the bad guy.

In the interest of fairness I want to mention that I was impressed by O’Donnel’s performance. He did a great job of portraying the nervous paranoia of a guy who has to decide between helping Max Payne and staying alive. One of the better moments in the movie is when he’s in his office trying to appear helpful to Max Payne, everything seems to be going okay and then Max goes over and locks the door. Gulp.

The trailer for the movie kind of looked like a John Woo homage, so I was semi-interested until I found out about the PG-13. It turns out it’s not much of a shootout movie anyway, although it has its share of moments where it gets silent as Wahlberg falls backwards or a bullet fires in very, very, very slow motion. But it’s not so much a John Woo tribute as Woo filtered through the Matrix and probaly into the video game this was based on.

The city has a stylized look, sometimes looking almost black and white and always snowing (I think the only time you see sunlight is in flashbacks and visions of the afterlife). It reminded me of SIN CITY although thankfully it didn’t have that phony green screen look. But it made me wonder if SIN CITY and THE SPIRIT have killed the stylized city for now. Especially after the 1989 BATMAN there were so many movies that took place in a heightened, heavily art designed city that looked somewhere between reality and a cartoon. I used to enjoy that sort of look, and it’s not like they do a bad job on this one, but I think maybe it just doesn’t cut it anymore. Or maybe I’m getting too old.

The snow in the movie doesn’t look very real, it’s the fake snow that’s too light so it floats in all directions instead of just down. This is of course a small complaint but there’s a scene where Mila Kunis knocks on a door and a feather that is part of the fake snow bounces off the door and floats off, casting a large, distinctly-feather shaped shadow on the door. A goof like that is not really the sign of a bad movie but the fact that I rewound it three times and found it more interesting than what was actually going on probaly is.

In that same vein, I got a chuckle in a part where gunmen signal each other before kicking a door in, and the one guy gestures four times. Who goes on the count of 4? How did the other guy know not to go on 3?

If you do watch this movie – which I don’t really recommend unless you’re bored and it’s on cable, on a plane or your friend left it at your apartment – I suggest watching until the end of the credits. There they have a nod to one of my all time favorite badass maneuvers, the Unspoken Agreement of Revenge. This would’ve been a cool way to set up the sequel if, you know, there had been a reason to make one.

Mark Wahlberg
This entry was posted on Sunday, January 18th, 2009 at 3:04 pm and is filed under Action, Reviews. You can follow any responses to this entry through the RSS 2.0 feed. You can skip to the end and leave a response. Pinging is currently not allowed.