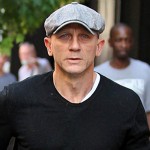 You and me we’re movie nerds. So when we go out to a movie we try to see it on the biggest, nicest screen. We see it in Imax if we can, or we have our favorite theaters where we hope it will be playing. But you gotta wonder why we keep doing that when more and more movies are not designed to be comprehensible on a large screen. Increasingly, action movies are designed to be viewed on your phone or wrist watch or whatever silly shit they invent next. Why do I wait out in the cold for two hours to see this movie on the giant Cinerama screen when it’s just gonna guarantee that I will have no idea if James Bond’s car is in front of or behind the other car, which one went off the cliff, what James Bond is doing to the guy he’s fighting and also which one is James Bond? At the very least they should rope off the front 2/3 of all these theaters since Marc Forster, the director of QUANTUM OF SOLACE, apparently was not told that people may sit within 250 feet of the screen.

There’s a whole lot of action in this movie. It hits for the cycle on different types of chases: foot, motorcycle, car, boat, plane. It’s got lots of quick, brutal (Golden Era Seagal style) fisticuffs, it’s got guns, some knives, I don’t think there were any swords or bow and arrows but I might’ve missed those. All the gunshots and crunching flesh, it sounds so exciting and it really made me wish I could’ve been there on the set to see what it looked like standing back where the camera should’ve been.

I mean fuck, if you’re gonna shoot a thrilling car chase/shootout almost entirely in close-ups why not go all the way and just put a stationary camera on the dashboard showing Daniel Craig’s expressions for the whole scene? At least then it’s something new and nobody will waste their time darting their eyes back and forth trying to figure out what’s happening.

That needs to be said. But I still enjoyed this movie, including some of the action. I don’t mean to blow it out of proportion – it’s not Michael Bay-disorienting or even Paul Greengrass-dizzying. It’s just that there was a beautiful time not long ago when it fucking WENT WITHOUT SAYING that the goal of directing and filming a movie was to intentionally place the camera and edit the shots in such a way that you visually communicated what was happening. Alot of filmatists get it backwards these days, they keep thinking the composition and order of shots are NOT supposed to make sense to the audience. So this is their weekly reminder. Do I need to send you knuckleheads some flash cards or something? Would that help?

I cannot say this is a monumental sequel that hits the nail even more on the head and takes the material to unforeseen new plateaus, like say THE DARK KNIGHT or THE HUMAN TORNADO. And with it being Daniel Craig’s second go round at the character it doesn’t have that exciting brand-newness of the first one. But it’s a worthy installment. The underly-comprehensible action is my only major complaint. Craig gets several great badass moves – stabbing a guy and then holding his hand until he has no pulse, flipping a guy’s motorcycle out from underneath him, etc. He gets some good sarcastic humor but all pretty grim and never too corny. It’s got your usual bevy of gorgeous women, one of them apparently named Strawberry Fields but luckily I don’t think they mentioned her first name. It’s got a better theme song than last time. And I didn’t even notice any Paul Haggis lines where he has a character say something out loud that didn’t need to be said, like when Vesper Lynd was sitting in the shower with an expression worth a thousand words and then she had to add a couple more about how she felt cold inside or some shit like that.

I wish I had got a chance to watch CASINO ROYALE again, because there were a couple things I didn’t remember too well. But I like that there’s a continuing story in this new series. It’s not some new super villain with an evil scheme and James Bond has to stop it. Instead he’s following the trail left by his girl’s death last time around and any other villainy he encounters is incidental. In fact, he uncovers the existence of an evil organization we will surely learn more about in future installments. (do you guys think there will be another one? I’m keepin my fingers crossed!) I won’t say anything specific but the way they meet and the way Bond takes advantage of their meeting are the highlights of the movie in my opinion.

And now that I think about it they came up with their way to make Bond relevant without a cold war. Quantum (Q.U.A.N.T.U.M.?) aren’t religious fanatics or anything, but they are mysteriously organized and spread secretly around the world, mirroring the kind of terrorist threats we in the west worry about today. There’s alot of talk about the morality of MI-6 and CIA making deals with assholes, and fighting for oil rights even comes into play. This isn’t too real (it’s still James Bond) but it’s the modern world, not some throwback.

It’s fun to watch this guy barge into places and try to wing it when he has no idea what’s going on. He kills a guy, takes his briefcase and goes to meet with somebody not knowing who he’s supposed to be or what’s in the case. In the Pierce Brosnan Bonds he did those impossible stunts like driving a plane off a cliff or whatever, and that was fun. But with Craig it seems less superhuman, more like a guy who is secure in his own bad motherfuckerness. Brosnan seemed untouchable, but Craig is definitely touchable, he gets the shit beat out of him in these movies. Even on the poster he has blood on him. But he’s tough enough to walk away.

I’ve never really been much of a Bond guy, so sorry if this is an outrage, but I still think Craig is the best one. He’s a weird contradiction, a rugged tough face that still looks suave in a good suit. Not too many people can do it that good, even Steve McQueen I thought came off kind of phony playing a rich guy in THE THOMAS CROWN AFFAIR. Craig seems like a guy who could really kill you with his bare hands but also wears a tie better than you. In fact he’s so good at it that when he walks into a hotel for the super-rich covered in dirt and blood the staff still kisses his ass. You or I walk in there with blood on us, I guarantee you they’re gonna be rude about it.

I’m not sure what the deal is with Marc Forster, I don’t understand how the different movies he’s directed come from the same guy. But I guess nobody with a singular vision is gonna be hired by these producers, and other than having the camera too close and occasionally intercutting too much (do you really need to throw in random opera shots in an already muddled action sequence?) he does okay. I’ll tell you this, I never wanted to beat up the movie like I did FINDING NEVERLAND. It never condescended to me about the power of whimsy and imagination. That’s a plus. This is BY FAR the best of the two Marc Forster movie’s I’ve watched.

In conclusion, I will watch the next one.

007 Daniel Craig
This entry was posted on Friday, November 14th, 2008 at 5:44 am and is filed under Action, AICN, Reviews. You can follow any responses to this entry through the RSS 2.0 feed. You can leave a response, or trackback from your own site.

66 Responses to “Vern Trades Punches With James Bond In QUANTUM OF SOLACE!”