Mike Flanagan double feature: ‘Oculus’ and ‘Before I Wake’ 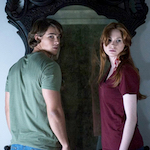 I don’t know why it took me this long, but I finally decided to catch up with the two Mike Flanagan joints I hadn’t seen yet (not counting the dramas he made during and immediately after college, or the TV series The Firefighter Combat Challenge). He made his entry into horror in 2006, with a shot-on-video-in-one-room short called Oculus: Chapter 3 – The Man with the Plan. Like George Lucas with STAR WARS, his story was bigger than his resources so he started with the most exciting chapter and filled in the rest later.

The short is about a guy who has obtained a haunted mirror that he plans to destroy. It’s a cool idea for a short with acting and visuals that require a certain level of forgiveness. But it apparently went over well at film festivals and inspired some interest in a feature version. The trouble was that producers all wanted to make it a found footage movie and/or give it to a director other than Flanagan. So instead he set the evil mirror aside and did a Kickstarter campaign to finance his $70,000 debut horror feature, ABSENTIA (2011). And once that was under his belt he got Intrepid Features (WAIST DEEP, THE STRANGERS) to let him direct a non-found-footage OCULUS, which filmed in 2012.  And they must’ve been pretty happy with it, because now he’s a partner in the company. END_OF_DOCUMENT_TOKEN_TO_BE_REPLACED 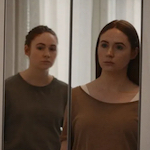 That sounds quite a bit like this one too, despite entirely different subject matter. DUAL is about clones and is set in a casually dystopian near future (or present?), so it’s technically a sci-fi movie, but it feels like it could be the same world as the previous one. It’s got the same sort of deadpan strangeness, plainness and bone-dry, bleak humor. There’s even some combat training that takes place in a room that might as well be one of the dojos in that movie. I wondered if Stearns ever considered using Allesandro Nivola’s asshole sensei character as the trainer, then I read that Eisenberg was announced as a cast member at one point, so maybe it would’ve been him. END_OF_DOCUMENT_TOKEN_TO_BE_REPLACED