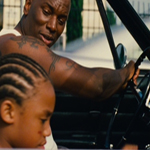 Before Tyrese found a comfortable place as a supporting player in the FAST AND FURIOUS and TRANSFORMERSES pictures he was just another model and R&B singer trying to prove himself as an actor. I remember liking him in John Singleton’s BABY BOY, which at least at the time (2001) I thought was an underrated companion piece to BOYZ N THE HOOD. In 2003 Singleton had him as the Vin Diesel replacement in 2 FAST 2 FURIOUS, in 2007 he did TRANSFORMERS, and so far he’s done a total of five sequels to those two movies.

So WAIST DEEP (2006) is kind of an anomaly in the middle there because it’s pretty much the only straight up Tyrese vehicle, with elements of 2 FAST but a seriousness level leaning a little more toward BABY BOY. Like in both movies he plays a struggling Los Angeles native, like in 2 FAST he’s an ex-con and he’s trying to make a new life. His name is Otis or O2, he’s a single father out on parole and his car gets jacked with his son (H. Hunter Hall, BLACK NATIVITY) in the back seat. You’d think the thieves would want to dump the kid off immediately, but instead they bring him to Big Meat (The Game), psychotic kingpin of “the notorious gang The Outlaw Syndicate” who incorrectly believes O2 still has the money from the robbery he went down for, and demands it as ransom. Or at least that’s what his shitty brother Lucky (Larenz Tate, CRASH) claims, but it kinda seemed like he might’ve been using the situation to pay off his own debts. I’m not sure.

At any rate O2 grabs Coco (Meagan Good, HOUSE PARTY 4: DOWN TO THE LAST MINUTE), another victim of the criminal empire who was used as the hot girl to distract him before the jacking, and makes her help him get his son back. They end up working as a team robbing the gangs and the banks to get enough to pay the ransom and buy Coco a new life.

The look (cinematography by TERMINATOR SALVATION‘s Shane “Professional” Hurlbut) is less glossy than a typical studio of the time, including TOKYO DRIFT, which came out the week before. But it’s more of a pulpy crime novel world than gritty realism. Big Meat works out of a huge warehouse designed like a prison. He lifts weights in between a bunch of chain link cages containing his drug manufacturing operation, prisoners like Junior, and attack dogs. He makes a public demonstration of hacking off a guy’s arm with a machete and saying he’ll give it back if the guy “pays his taxes.” And O2 actually hears it happen in the background of a phone call with Lucky and asks “What was that sound?” 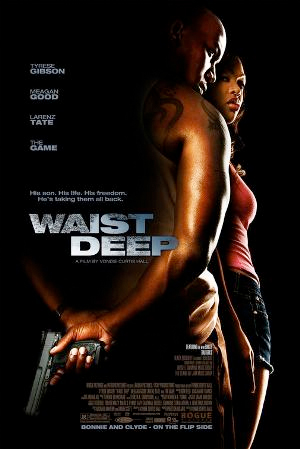 A montage of three bank robberies seems like an awful lot to happen in one day, but it’s nice to see Coco coming alive, putting on different outfits and using different modes of distraction. She’s really hot and develops a convincing chemistry with O2, but he appropriately resists her for a while considering the circumstances. There’s a pretty cringe-worthy moment (in the trailer, of course) where a gas station employee recognizes Coco from TV but instead of wanting to turn her in wants her autograph. He calls them the new Bonnie and Clyde, and he probly just means because they’re a man and woman robbing banks together, but of course there’s also the parallel of them doing it against a backdrop of economic disparity. They’ve lived their whole lives in South Los Angeles and Coco’s never even seen the Sunset Strip before. (Shit, even I’ve seen it.) She’s blown away by the Hollywood Hills home they end up squatting in. There’s a whole different world outside of their neighborhood.

The story takes place during a day of protest… not against another police murder of an unarmed black man, like the protests we’ve been having in major city after major city all year, but in fact of “the lack of police protection in their community.” It’s so sad that that seems quaint. It’s like, after we get
them to stop killing people and have more accountability then we have to hope they will come into the neighborhood and help people. (See also: “911 Is a Joke.”)

The protesters want to stop the violence and crime in the neighborhood, they’re tired of being victims and friendly fire of the drug gangs. They chant “Save our streets” and Lucky is right across the street being abducted at gunpoint. Nobody notices. Some of these less believable, more poetic moments are also some of my favorite parts. You can pretty easily predict how it’s gonna end, and you could definitely argue that it’s (IMPLIED SPOILERS) typical Hollywood bullshit, but I would’ve been mad if it went the other way. I like these characters and I think they deserve that ending. I want to see them escape the cycle, break the chain for Junior, and find their purpose.

O2 is a cool character. He was some kind of criminal, but he’s making a legitimate attempt to be humble, work a shitty job and do right by his son. In the FAST movies he’s the funny doofus, but here he’s the toughest guy in any scene, and his relationship with his son is his badass juxtaposition. Junior does not seem much like his dad. He has a scrape on his face from “some boy [who] tried to punk me,” he collects toy horses (not ponies), he gets scared like a kid should, he tells his dad he loves him. Or as some creeps on the IMDb message boards put it, “did anybody find it hilarious at how gay the kid was.”

And what I like is that O2 doesn’t try to discourage any of that. He buys him the toy horses and can’t hide that it makes him feel good to make him happy that way. He’s a good father. He’s not pulling some Lucious Lyon stick-him-in-the-garbage-can thing. (contemporary pop culture reference: the TV show Empire)

At the same time, O2 is not some righteous born again. As soon as Junior gets taken he pulls out a gun and starts shooting. And it seemed to me like the guys he shot weren’t even involved, they were somebody that the thief crashed into? I probly misunderstood. But it’s an intense scene because on one hand you understand why he’s shooting and on the other hand it really shows how A Good Guy With A Gun is not the best solution for all situations, probly not even in the top five.

I like how it’s kind of a FALLING DOWN, worst day in the world type scenario. First Lucky flakes out on him and won’t pick up Junior, then his replacement at work doesn’t show up, and the boss won’t let him go, and then he takes the gun from work with him since he has no next shift to hand it off to, and that’s one reason he doesn’t want to call the cops. Everything is against him, but he makes it through.

Like Paul Walker (who was apparently Tyrese’s best friend in real life too) Tyrese does alot of driving movies, not just 2 FAST. Remember he also was Machine Gun Joe in DEATH RACE, and this one climaxes with an emotional phone call in the middle of a high speed police chase. I really like him in this movie, which brings up the question of why he didn’t continue as a leading man, but I guess this one lost money and the ones where he was the sidekick made a billion dollars and there you go.

Seeing Tate made me wonder what happened to him anyway. He was such a big deal for a while after MENACE II SOCIETY. He was getting the kind of roles that Michael B. Jordan is getting now. But I looked him up and he’s done a ton of TV in recent years, including that show House of Lies with Don Cheadle. So I shouldn’t worry about him.

Pretty good hip hop soundtrack on this one, by the way. There’s a nice moment where father and son are driving in the convertible nodding their heads to the radio together. At one point he’s listening to “Child Support.” I’m sure that was just what Cube had to offer at the time (the album Laugh Now, Cry Later came out a few weeks before the movie) but I like that it’s in there because that’s a good song from after most people (including me) had given up on Cube as a current rapper. In the song he brags about his influence on the current generation of rappers and has some great lines about later (but kinda old at this point) generations. For example I always liked “What you mad about, diamonds all in your mouth?” Also he forced me to look up the term “pyroclastic flow.”

I liked this one. Shit, I even want to compliment the title. I like that it’s a good description of the amount of trouble he’s in, but it doesn’t refer to some literal thing in the movie. There’s not a part where he gets stuck in mud or anything. Anyway, it’s directed by Vondie Curtis-Hall, best known as an actor from Chicago Hope, but he also directed GRIDLOCK’D and GLITTER. He wrote the screenplay with Darin Scott (director of HOUSE PARTY: TONIGHT’S THE NIGHT), story by Michael Mahern (MOBSTERS, 3 episodes of New York Undercover).

This entry was posted on Tuesday, June 2nd, 2015 at 1:00 pm and is filed under Crime, Reviews. You can follow any responses to this entry through the RSS 2.0 feed. You can skip to the end and leave a response. Pinging is currently not allowed.