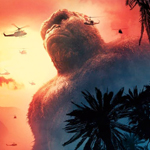 But to be fair, “Down On the Street” by the Stooges and “Paranoid” by Black Sabbath are two heavily-featured songs that wouldn’t be on the Robert Zemeckis version of this. And believe it or not alot of it was filmed on location in the actual country of Vietnam, unlike any Vietnam War movie I know of. Vogt-Roberts and cinematographer Larry Fong (3oo, SUPER 8)’s bright orange, yellow and red skies make it stand out visually from any other giant monster movie. END_OF_DOCUMENT_TOKEN_TO_BE_REPLACED

THE KINGS OF SUMMER is a real good indie movie about teenagers, around 15 years old I believe, an emotional age. Joe (Nick Robinson) and Patrick (Gabriel Basso from SUPER 8) don’t seem to be the popular kids, but they’re not “geeks” either. Their parents aren’t bad people, but they can’t get along with them. They’re old enough to sneak out and go to keggers, to get embarrassed talking to girls, but also they can’t drive, they gotta ride bikes. They’ve got a little bit of kid still in them, enough that it seems like a good idea when Joe convinces Patrick (and Biaggio [Moises Arias], a weird kid that just starts following them around) that they should ditch their parents and build themselves a house out in the woods.
END_OF_DOCUMENT_TOKEN_TO_BE_REPLACED