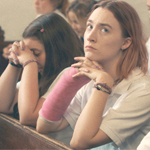 Before he did PHANTASM, a 22 year old Don Coscarelli wasn’t even looking to be a horror director. He got together the people he knew and filmed in his neighborhood and made this sweet coming-of-age type comedy about growing up in the California suburbs of the ’70s. Kenny (Dan McCann) is a kid about 12 or 13, his company is Doug (PHANTASM star A. Michael Baldwin) and Sherman (Jeff Roth), a goofy younger kid from across the street who they pick on but start becoming real friends with when they see him getting beat up by Johnny Hoffman (Willy Masterson), the same neighborhood bully they live in terror of.
END_OF_DOCUMENT_TOKEN_TO_BE_REPLACED 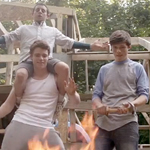 THE KINGS OF SUMMER is a real good indie movie about teenagers, around 15 years old I believe, an emotional age. Joe (Nick Robinson) and Patrick (Gabriel Basso from SUPER 8) don’t seem to be the popular kids, but they’re not “geeks” either. Their parents aren’t bad people, but they can’t get along with them. They’re old enough to sneak out and go to keggers, to get embarrassed talking to girls, but also they can’t drive, they gotta ride bikes. They’ve got a little bit of kid still in them, enough that it seems like a good idea when Joe convinces Patrick (and Biaggio [Moises Arias], a weird kid that just starts following them around) that they should ditch their parents and build themselves a house out in the woods.
END_OF_DOCUMENT_TOKEN_TO_BE_REPLACED