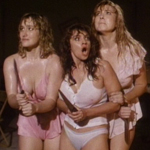 I didn’t like SORORITY HOUSE MASSACRE, but man, SORORITY HOUSE MASSACRE II is not SORORITY HOUSE MASSACRE caliber. This one is a Jim Wynorski joint, so I guess it’s not really meant to necessarily be a real movie. This is one of the five movies he did between 1989’s RETURN OF SWAMP THING and 1992’s 976-EVIL II. Another one was SCREAM QUEEN HOT TUB PARTY under the pseudonym Arch Stanton. He has his thing he does. He churns them out and has fun and they usually have a little likable goofy humor in them, and then there is the rest of the movie.

In this one, five interchangeable college babes have to spend the night in an old house they have just purchased for their sorority house. The power and phones are not hooked up, there’s no furniture and also the reason they could afford the place is because a bunch of people were murdered there 5 years ago. But they have to stay in this scary place to meet the movers in the morning. END_OF_DOCUMENT_TOKEN_TO_BE_REPLACED

I didn’t have cable in the ’80s so I never saw THE BEASTMASTER until I went on that Coscarelli kick a while back. But I didn’t move on to the sequels since Coscarelli had nothing to do with them, I just assumed they were trash. Well, good guess. But when I saw part 2 in that book I was just writing about, DESTROY ALL MOVIES, I started thinking about the stupidity of sending the Beastmaster through a “portal in time” to modern day Los Angeles, and came to the inevitable realization that I should watch it.
END_OF_DOCUMENT_TOKEN_TO_BE_REPLACED