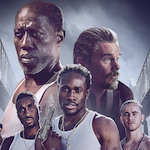 As you may know I’m a fan of RZA’s music (Wu-Tang Clan, GHOST DOG score), acting (THE PROTECTOR 2, BRICK MANSIONS, THE DEAD DON’T DIE) and film scholarship (the commentary track on THE 36TH CHAMBER OF SHAOLIN, his 36films.com livestreams). I’m also a big fan of his first film as a director (and writer and star and composer), THE MAN WITH THE IRON FISTS. I have some issues with the way he shot the fights, but I absolutely love the old school kung fu fantasy world he created and the many characters, clans and weapons within it. So I take him seriously as a filmmaker. END_OF_DOCUMENT_TOKEN_TO_BE_REPLACED