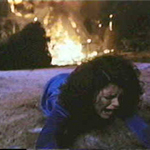 PROM NIGHT IV: DELIVER US FROM EVIL, the finale of the original Canadian PROM NIGHT series (so far), ditches parts II–III‘s story of the avenging prom queen ghost for some new religiously themed horror about some Catholic school students and their boyfriends from Hamilton High who get dressed up and rent a limo and do not go to prom. (So there is no disco, no rock, no Maestro Fresh-Wes, no popular music at all.) END_OF_DOCUMENT_TOKEN_TO_BE_REPLACED 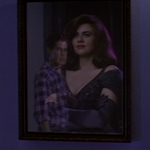 It’s a depressing commentary on small town life that this poor guy would still be living in the same god damn town where he grew up, mopping floors, and so mush-brained that when a mysterious sexy trespasser calls him by the same pet name as the girl he dated in high school who was burned alive in front of his eyes and recently came back from the dead, killed several students and burned down the gym during the prom he smiles nostalgically and says “I haven’t heard that name in 30 years. There was a girl–” END_OF_DOCUMENT_TOKEN_TO_BE_REPLACED