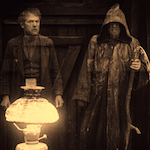 THE PHANTOM CARRIAGE is a phantom movie that came well before PHANTOM THREAD, THE PHANTOM MENACE, or even my man THE PHANTOM. In fact it hails from way back in the silent era of film. Obviously 1921 is a long time ago, but it was a little ways into the movie before it clicked in my brain that holy shit this movie is a-hundred-and-one-years-old. That’s, like, pretty old. Trends, hairstyles, etc. have changed.

It’s also Swedish, which is a whole other thing. I’ve watched HÄXAN, THE VIRGIN SPRING, THRILLER: A CRUEL PICTURE, LET THE RIGHT ONE IN and the DRAGON TATTOO trilogy from my Ikea couch while eating Swedish Fish and wishing I had a Dolph Lundgren poster, but otherwise it’s a culture I’m completely ignorant about. Wikipedia describes PHANTOM CARRIAGE writer/director/star Victor Sjöström as “Sweden’s most prominent director in the Golden Age of Silent Film in Europe.” He was such an influence on also-very-influential Swedish director Ingmar Bergman that Bergman cast him in the lead of WILD STRAWBERRIES and got the idea of his most internationally recognizable character – Death in THE SEVENTH SEAL – straight from THE PHANTOM CARRIAGE. 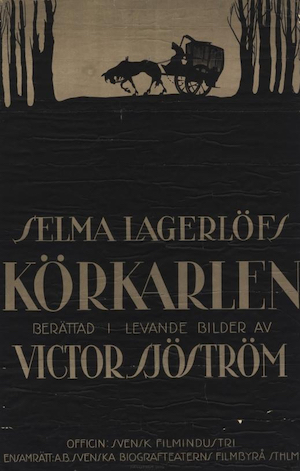 That’s why I thought this sounded cool – it’s a spooky-adjacent story set on New Year’s Eve (or I guess technically New Year’s Day, since it’s mostly after midnight). It tells the legend that the very last person to die each year (actually, they say the person who dies during the stroke of midnight) is cursed to drive Death’s carriage for the next year, going around collecting the souls of everybody when they die. I’m not sure why – it’s not like you deserve to be cursed for dying at midnight. It’s just a chore somebody has to do, like cleaning up after the party. If you didn’t want to get stuck with it you should’ve hit the road earlier.

We get to see the current guy doing the job a little bit, it’s pretty cool. At one point he drives out into the ocean and I wondered what’s up and then there’s a boat filled with water. Oh shit. Dead kid underwater.

It’s a normal carriage but it’s see-through and I think its horses are painted to look skeletal. And “for him a single night seems like 100 years on earth,” so honestly it could be a pretty good delay tactic if you’re going to Hell. 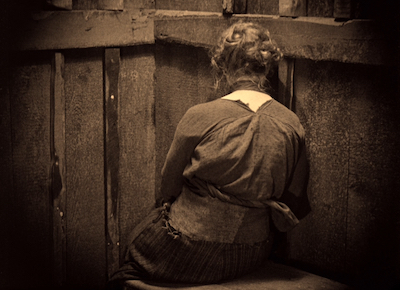 There’s this lady from the Salvation Army named Sister Edit who’s on her death bed on New Year’s Eve. (It’s never implied that she’s in danger of becoming Death’s driver, so I’m not sure if the gig was open to women in those days.) She begs her co-worker Maria to go find some dude named David Holm (played by Sjöström himself) because she needs to tell him something before she dies. Maria goes to a decrepit shack-like apartment off an alley where two little girls sleep and a woman with torn clothes sits facing the corner like the end of THE BLAIR WITCH PROJECT. It’s unclear what’s going on for a while, but this is David Holm’s wife Anna and their kids. She doesn’t know where he is.

Another friend named Gustafsson finds the elusive David Holm in the graveyard drunk off his ass telling his buddies about his old friend Georges telling him that story about the Phantom Carriage. When Gustafsson tells him that poor Sister Edit is about to die and wants to see him he basically says nah, I’m busy. To their credit his boys are so offended that they beat him to death. 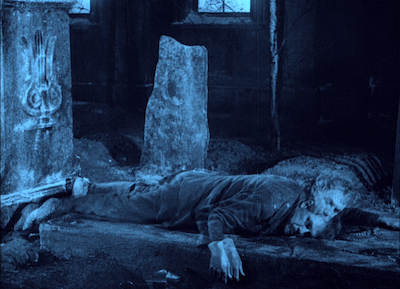 So he’s laying there dead, and we see his spirit sit up out of his body as the Phantom Carriage arrives. Coincidentally the driver is that friend he was just talking about, Georges. Whoops. I didn’t even know he was sick. Well, good to see ya, old friend. Sort of.

Georges feels guilty, because he thinks he was the bad influence that turned David into such a garbage pile of a human and sent him on this path of being drunk in a graveyard dead from a fight over being an asshole to a nun. David is in denial about being dead and tries to convince Georges to drive his body to the hospital. Nope, sorry bud, no dice. Only carries dead souls. So get in, dummy. I gotta show you the ropes.

I watched this on the Criterion blu-ray, which has an amazing transfer as far as silent films go. You got your standard flicker, but it’s so beautifully clear that at times it seems like a new movie put through old timey filters. Can’t beat film, I guess. It’s a tinted version, with blue for outdoor night time scenes and yellow for indoor. There are two scores on the disc – a more traditional one, but I chose the experimental one, lots of ominous feedback hums

The story is told in a non-linear fashion, which will be a funny thing to bring up next time a non-chronological script is being hyped as a hot new innovation. It uses visual storytelling techniques you might not guess were around so early in the game, for example the corruption of David is illustrated by a dissolve from a picnic with his family to him without his family, just his buddies, drunk in the grass in the same spot.

It reminds me of A Christmas Carol, because Georges (in hooded cloak and holding a scythe) reminds David about how he got here, and we go through his life. The difference is he’s very much not a rich guy, and he’s somehow way worse than Scrooge. He was very briefly a happy normal guy with his family, but when he started drinking with Georges that became his whole life. He gets arrested for public intoxication and the jailer shows him how his brother is in there for killing somebody while drunk, and says it should’ve been David who got the long sentence ‘cause he corrupted his brother. When he gets home his wife has taken the kids and left and instead of thinking “Oh man, how can I fix this?” he thinks “Oh man, I will travel the entire country searching for her so I can get my revenge.”

While looking for Anna he gets consumption and brags about how he doesn’t give a shit and wants to spread it to everybody (seems weirdly familiar). Late on New Year’s Eve (last year) he shows up at the Salvation Army Mission and is a total jerk to Sisters Edit and Maria. But Edit had prayed that the first person to visit the Mission in the new year would have good fortune, so she dotes on him. While he’s asleep she takes his raggedy coat and sews it up even though Maria warns her that they can’t disinfect it.

You guessed it: she’s now dying of the disease he gave her. He killed her. It gets worse. When he puts on his coat and finds out that she’s the one who fixed it for him he tears out each of the patches in front of her and laughs “It’s a shame you went through all that trouble, miss, but I’m used to it this way.” He always smiles with pride when he’s being an asshole. Just the worst motherfucker on earth. Driving the Phantom Carriage is not a worthy curse for him. He should have to get shit on by the Phantom Horses all day. 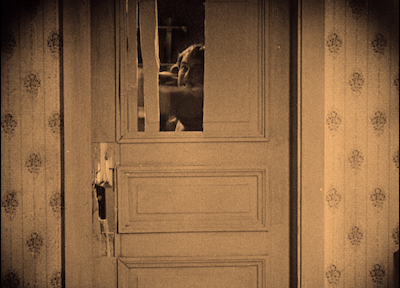 Since he did promise Edit to come back in a year to see if her prayer worked, Georges drags his ghostly ass to see her. But also we see this story of how Edit found David and Gustaffson drunk at a bar one time and got them to come to a Salvation Army meeting, which did wonders for Gustaffson. David just made fun of it. Edit meets Anna and convinces her to give the ol’ marriage another shot. An absolutely terrible idea. Immediately David is intentionally trying to infect his daughters, and Anna is trying to flee again, and he chops through the door with an ax. Obviously I couldn’t help but think of the most famous scene in THE SHINING, and sure enough many cite this as its inspiration. I’m not sure if Kubrick ever confirmed it (and I mean, that part is in the book, isn’t it?)

Yeah, this goes to dark places. Georges brings ghosty David to his family, not to learn anything, just to collect their souls – Anna is about to poison herself and her kids. David’s redemptive act is to feel so bad about it he manages to wake up in his body, run to Anna, promise to be better and pray to “let my soul come to maturity before being harvested.” It’s cool, though I don’t buy it.

The most fucked up part of it to me, being the product of a very different time, is that Edit’s whole deal is being in love with David. She has never even seen a remotely good side of him but she just obsesses over him as, like, a fixer upper. When she discovers he’s already married she selflessly tries to repair that relationship, but when he responds with attempted murder (tearing out her patches, just like on his coat) she blames herself and her dying wish is for him to forgive her! This poor, poor lady. Somebody really did a number on her. 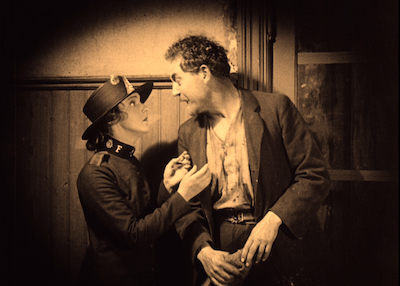 Another thing is that by modern standards Edit is a pretty young woman and, even setting aside his terrible personality or his resemblance to Louis C.K., David doesn’t seem like much of a catch to me. But I have no clue whether a guy like that would be considered attractive at that time or if this is that familiar situation of the director flatteringly casting himself as the guy the ladies want.

THE PHANTOM CARRIAGE is actually based on a book written by a woman – Körkarlen (Thy Soul Shall Bear Witness!) by Selma Lagerlöf. Lagerlöf is known to have been a lesbian, so those of you who prefer movies from before the woke mob took over will have to stick to the 1910s. Lagerlöf does not seem to have had a positive view of men! But maybe the motherfuckers deserved it back then.

Interestingly, the book was commissioned by a health association to raise awareness about tuberculosis. It intentionally has scenes about infected clothing and public coughing to teach people about ways the disease is spread. Funny that such a historic piece of cinema would come out of a P.S.A. Judging by the book’s plot summary on Wikipedia it seems like the movie is a close adaptation, though there are some crudely communicated things (silent film is hard) that might make more sense in the book. It does answer my question of what happened with the whole curse thing: Georges is stuck doing it another year. Oh well. Maybe he’ll get to visit with other people he corrupted.

The book was also adapted by French director Julien Duvivier in 1939, and another Swede, Arne Mattsson, in 1958. I don’t think those versions are available, unfortunately. So at least for now this is the best way to celebrate the new year while raising your awareness of tuberculosis.

New Year's Eve silent Swedish cinema Victor Sjostrom
This entry was posted on Wednesday, January 4th, 2023 at 10:36 am and is filed under Reviews, Drama, Horror. You can follow any responses to this entry through the RSS 2.0 feed. You can skip to the end and leave a response. Pinging is currently not allowed.

5 Responses to “The Phantom Carriage”