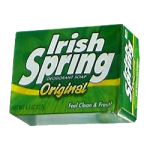 Until now. Today, I return to the topic armed with a new, more Swedish perspective of the classic revenge tale.

I would have to say Ingmar Bergman’s take is the best of the three, and one of the nicest slasher pics you’ll ever see. His is less graphic, but more medieval, more religious, and more Swedish. Instead of those faded, muddy ’70s colors his has crisp black and white photography. Must’ve looked weird playing in those grindhouses. Maybe that’s why it has been banned in over 5,000 countries or whatever. Or I might be thinking of a different movie. 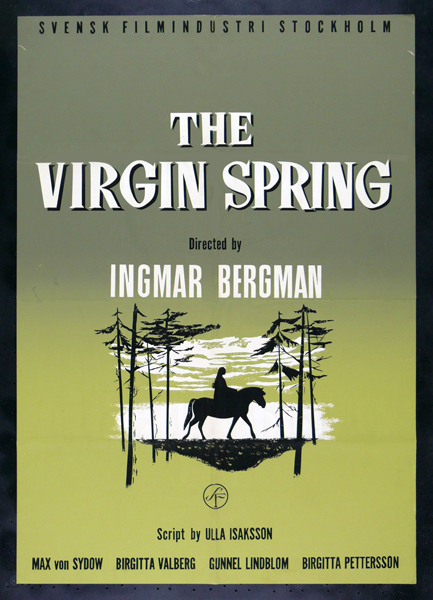 It is a pretty disturbing movie actually, just not rubbing-a-dog’s-nose-in-his-shit-hard-to-watch like the subgenre it accidentally spawned. The story is pretty similar to the other two in its basic outline. There are two girls, Karin and Ingeri, but instead of both of them getting raped and killed, Ingeri survives and blames herself because 1) she was jealous of the other girl and 2) she may have prayed to Odin to fuck up the other girl’s life. Just a little bit. Anyway, it’s a good thing this girl survives because she’s pregnant. That would be too much. (Oh jesus, I can only imagine what Demon Dave would’ve had happen to poor Ingeri and Ingeri Jr.)

Instead of going through the woods to get to a rock concert or a rave, these girls are going to church. Instead of going off to get pot or ecstasy, they stop to eat sandwiches. Karin hangs out with three brothers she meets in the woods, some weird goat herders. “Thin Herdsman” is sort of the leader, “Mute Herdsman” has his tongue cut out and seems a little pervy (this guy has a great villain face, by the way), “Boy” is a little kid. That makes it creepier because when they attack and Karin tries to escape, the kid runs after her. I don’t know what the hell was going on out there in the 14th century Swedish woods, but that’s not how we raise our kids in America. That kid needs some discipline.

Anyway, after hanging out with Karin for a little bit they turn on her. They rape her and beat her to death with a club. Ingeri watches from the woods and actually picks up a rock to throw at them in Karin’s defense, but stops herself from doing it. And she’s so horrified and torn up by the whole thing that she bites the rock. This reminded me of the ridiculous scene in the movie 8MM where Nic Cage watched a snuff film and was so horrified that he bit his fist. And now that I’ve mentioned that I would like to apologize to the world for comparing an Ingmar Bergman film to a Joel Schumacher. Sorry world, sorry Ingmar. My thoughts are with all of you.

Okay, I take it back, that is an unfair generalization. But there is kind of a class tension thing going on in this movie, I think. Karin naively trusts the herdsmen, trying to be open to meeting new friends and shit. They oughta respect her for that. But she has that fancy silk dress, and she tells them fantasy stories about the amazing lifestyle she supposedly lives, and you’re not entirely sure if they understand that she’s joking. I think to some hungry, lonely, crazy herdsmen out in the woods she’s just some dumb rich bitch, that’s how they justify it in their minds, I bet.

After they’ve killed her, of course, the herdsmen end up staying with Karin’s parents. This is one thing that makes alot more sense in the original story than in the remakes. Sure, it’s a coincidence that they would take the same path and end up at Karin’s place, but it was probaly more common back then for poor travelers to take shelter with charitable strangers. And these people are very religious so it makes sense that they would want to help the poor. Because of the way things are today you might expect a very religious family to be uptight and judgmental about these unkempt goat workers, but they’re not. They follow what Jesus said. At first.

It would all just be cruel irony (remember, this takes place before 9-11, so there was still irony) if Thin Herdsman wasn’t stupid enough to try to sell Karin’s fancy silk dress to her mom. And there’s blood on it. Even before DNA testing, this is a pretty solid tipoff for mom and dad as to why Karin hasn’t come home from church yet. So at this point dad, played by Max Von Sydow, takes his badass revenge. As I suspected, there are no boobie traps like in LAST HOUSE, and no chain saws like in both LAST HOUSE and CHAOS.

Although many (like me) know THE VIRGIN SPRING as the inspiration for Wes Craven and Dave “The Demon” DeFalco’s works, it is also considered a beloved arthouse type of classic, so the Criterion DVD has an introduction from Ang Lee talking about how it was the first art movie he saw and was a huge inspiration to him and etc. And it’s real quiet and pretty and all but what surprised me is that it actually has some genuinely badass moments. My favorite is when mom sees Karin’s dress and realizes that these fuckin herdsmen killed her daughter. But they have no idea. Her voice gets cold as hell and she says something like, “I have to ask my husband what he would give to someone for something like this,” and you know that what he would give is some god damn REVENGE. Keep the change, herdsmen. And by the way, you smell like goat piss.

Max has an even colder reaction to the news. He doesn’t stop to cry or nothing. He just fumes. He talks to Ingeri, tears down a birch tree, takes a bath while beating himself with the branches (must be a Swede thing), then gets his sword and goes after the herdsmen. It reminded me of the great ROLLING THUNDER, that silent, single-minded, sort of ritualistic pursuit of revenge. He immediately knows what he must do, takes a bit to prepare himself mentally, then does it. No discussion, no hedging. After he’s stabbed the two older herdsmen to death he actually picks up the boy and throws him against a shelf, which kills him (not on purpose). I’m not even sure how they shot that – maybe the age limit for stuntmen is lower in Sweden.

The big difference from the Craven/Demon Dave takes on the story is that this version is all about religion. The family are very religious, they say prayers before all meals, they send their daughter to church, and she says her prayers when she stops to share bread with the perverts of the woods. Ingeri fears for hersel because she knows she’s blasphemous. She makes evil prayers to Odin, an unlicensed god. The herdsmen are not religious and keep forgetting to say grace before eating when they’re with Karin and her family. So the question is, how does God let this happen? Is it because Karin was backsliding and overslept, missing church? Is it because Odin interfered? Or because God was pissed about this girl praying to Odin? But isn’t that bullshit if this family is so dedicated to God and just a couple fuckups causes them to have their daughter taken from them violently? This movie pretty much runs the whole gamut of “why did God let this happen?” questions.

Some people I read interpret the movie to be pretty harsh, they think Karin’s charm and beauty is actually bad for the family, that the parents are too liberal with her, that their love for her makes them focus on her when they should dedicate their whole life to worshiping God and not, like, having a relationship with their daughter. If that’s your interpretation though then it seems like it is God’s will to get rid of Karin. And I hope that’s not what my man Ingmar was going for. Because if so he’s making God out to be a real asshole. Anyway, it leaves you with plenty to ponder and interpret for yourself.

VIRGIN SPRING itself is based on an old Swedish ballad (which was probaly itself based on an old comic book or TV show). In the ballad, the girl actually gets her head cut off and then a spring comes out: “From her body they cut her golden head / A spring welled forth where the girl lay dead.” Maybe it’s just the translation but I’m thinking that actually means a geyser of samurai style blood spraying out of the neck stump. Bergman takes it literally, he has a spring of water appear. The head stays intact but when they lift up the body a spring is behind where the head was and the water comes out and I guess because the water is a virgin, everybody cleanses themselves in it. It is God water, very refreshing, offers hope for atonement, probaly works on vampires. Good shit, and not a bad idea as far as miracles from God go.

But still, I gotta say, the samurai neck geyser would’ve been cool too, and I’m sure fans of the original ballad were pretty fuckin pissed that Ingmar changed it. The same way those guys were mad at X-Men Part 3. So what I have done here is I have compared an Ingmar Bergman film to a Brett Ratner joint.

YOU HEAR ME INGMAR? I’M CALLING YOU OUT. THE SPRING IS THE BLOOD, NOT WATER. YOU’RE THINKING TOO LITERALLY, MOTHERFUCKER. LET’S TAKE IT TO THE RING.

update: Ingmar emailed me and apologized, so I am calling off the wrestling challenge and changing it to a Steven Seagal trivia challenge. However I have been told that Ingmar knows his shit in that particular area and that I may in fact be venturing into dark territory here. Well, whoever wins, THE VIRGIN SPRING is actually real good, I highly recommend it.

So here is my ranking for this particular rape-revenge tale:

Ingmar Bergman Max von Sydow rape-revenge revenge Swedish cinema
This entry was posted on Sunday, September 3rd, 2006 at 2:25 am and is filed under Drama, Reviews. You can follow any responses to this entry through the RSS 2.0 feed. You can skip to the end and leave a response. Pinging is currently not allowed.

One Response to “The Virgin Spring”