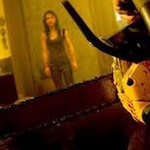 In the grand horror tradition, a group of young people get stranded somewhere bad and have to escape. It goes down when Adjie (Ario Bayu, GUNDALA) and his pregnant wife Astrid (Sigi Wimala, SATRIA DEWA: GATOTKACA) take a road trip with their doofus friends. Jimmy (Daniel Mananta, A MAN CALLED AHOK) is pretty straight-laced, but Eko (Dendy Subangil, SANG DEWI) is the horny loud mouth who embarrasses them and makes them uncomfortable, and Alam is kind of the crazy one. That’s established when he threatens some guys at a bar for sexually harassing their waitress, Adjie’s sister Ladya (Julie Estelle, “Hammer Girl” from THE RAID 2!). It seems like a very successful stare down until he turns around and gets a bottle smashed over his head. So for the whole movie he’s wearing a large bandage on his head that’s completely unrelated to the horror movie stuff that happens.

They’ve stopped here because before Adjie and Astrid move to Sydney for a job opportunity Adjie wants to patch things up with Ladya, who has hated him so much since a car accident killed their parents that she refuses to even take her inheritance. Astrid is close to her, though, and convinces her to come with them to the airport in Jakarta to see them off. 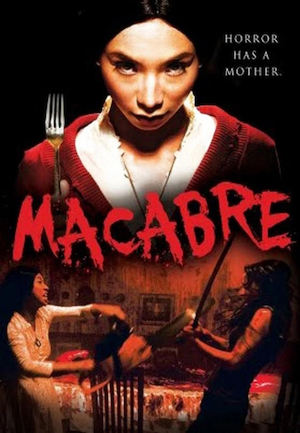 Of course Maya leads them to a house out in the middle of nowhere and convinces them to come inside to meet her mom (Shareefa Daanish, MAY THE DEVIL TAKE YOU TOO), who turns out to be named Dara and look not much older than her daughter, if at all. Dara insists that they stay for dinner, and there’s alot of uncomfortable looking at each other and not being able to say no while Eko (who thinks he’s gonna get laid or something?) says yes.

Before dinner they get some time to snoop around a little. Crazy fuckin Alam finds an antique sword, spins it around and does a bunch of moves with it. I love this moment because it creates that Goldilocks type discomfort of getting caught fuckin around with somebody else’s stuff, but also makes a vow to the audience that there’s gonna be some cool shit with a sword later. A vow that is kept.

At dinner they meet Maya’s brothers, the silent grump Arman (Ruly Lubis) and the stiff, prissy Adam (Arifin Putra, THE RAID 2), who reminds me of a human Brahms doll from THE BOY or an Indonesian Jared Kushner with fight skills.

I think we all know we’re headed down a TEXAS CHAIN SAW path. The friends enjoy a delicious meat of suspicious origin. Everybody starts acting tired and confused. They pass out and Dara says to “prepare the tools.”

After Alam wakes up alone and disoriented at the table, Maya tries to seduce him. Alam may be a loose cannon but he has more control of his dick than Eko, so he turns her down. She abruptly takes his hand and slashes his wrist, a simple bit of gore that made me wince. Another extremely effective gag happens a few minutes later when a knife stabs through a door and comes out between two of Ladya’s knuckles. Blood pours down as she carefully slides herself off the blade.

The Mo Brothers will show much more mastery in their later films, both together and separate. But this is a really impressive debut, well made with great imagery and production design and some confident, not-too-film-studenty cinematic flair (chain saw blade POVs, cool overhead shots). 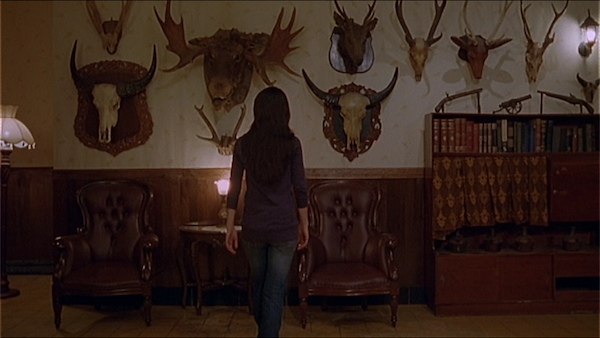 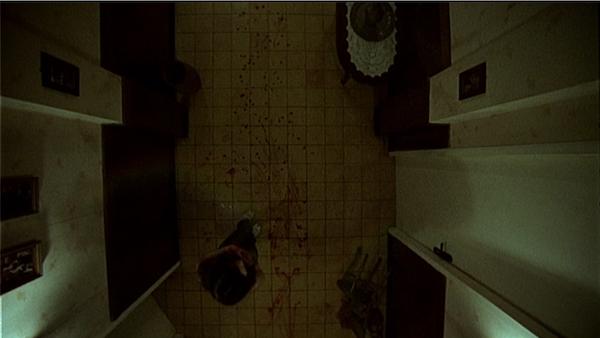 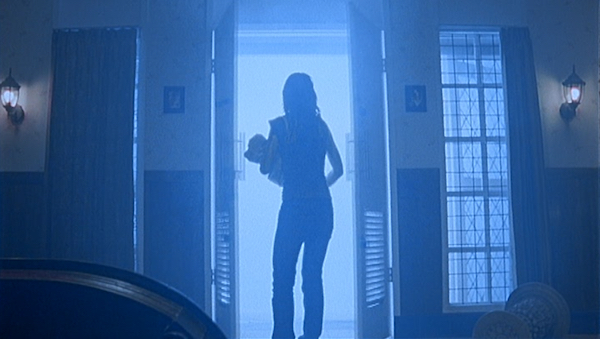 There are scenes that take place in the pouring rain. That can’t be easy to do. You don’t usually get that in a low budget first film. They’re following the old school horror-debut tradition, the Sam Raimi one, where you don’t skimp on anything. That goes especially for the most recognizable Mo Brothers element: the onslaught of visceral violence that builds up some momentum and then refuses to slow down. There’s an extremely disgusting decapitation, Dara stomps an eyeball with a stiletto heel, Ladya’s face is swollen up like the Toxic Avenger by the time she’s done, and it becomes hard to find a surface in that place that’s not covered in blood. There is so much slipping on bloody floors in this movie – it seems like it would be dangerous just to run around in there, even if nobody was trying to kill you.

But it’s not all about gruesomeness. There are great moments of tension and desperation. In one scene Astrid balances precariously on a stack of objects to pound on a high-up window for the attention of a couple who have pulled up outside. Unfortunately they’re there to buy, uh… product from Dara. Then as soon as they drive off Astrid’s water breaks. And as soon as the baby’s born Dara sends the others into the woods and shoots arrows at them. So much going on at this house. Thanks for the hospitality, ma’am, but my friends and I really do need to get going.

There’s pretty much an O.S.I.O. (oh shit it’s on) moment when Dara has lost one of her children and decides it’s time to get serious. You mean to tell me she wasn’t at full volume before!? I love the slow, ominous zoom on the back of her head as she commands her son. We don’t need to see her face. The hair that she’s had up so neatly, now down over her shoulders and messed up by the rain, tells us where she’s at.

I don’t think of it as an action movie, but come to think of it there might be more action than in some Liam Neeson movies and stuff. The violence includes a ton of stunt work: lots of scuffling, people grabbed by the head or the hair, getting smashed into things. There’s a sequence where a team of five “top cops” find Eko and come to the house to question the family. There’s some real tension as the family tries to act normal and not let them hear Ladya fighting in another room. But shit pops off and the body count gets a real boost. I would categorize most of the violence as slashing, stabbing and bashing, but here we also get shooting and knife throwing. Also, there’s kind of a fight movie structure to the skirmishes, with different one-on-ones culminating in a duel between the highest ranking member of each team. 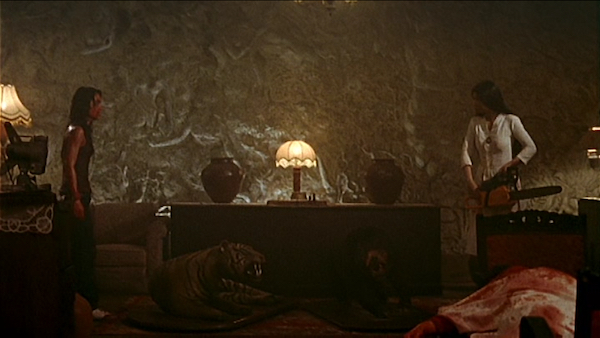 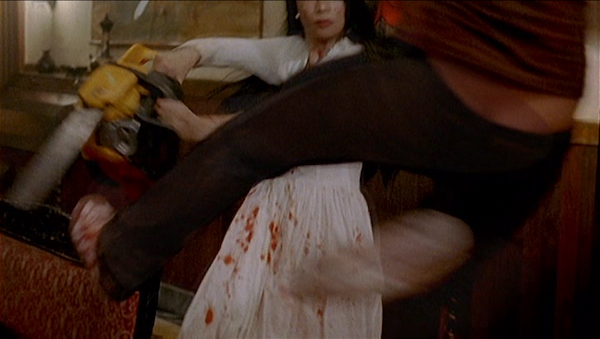 So it makes sense that these directors have proven to be great at both horror and action.

There’s obviously a ton of TEXAS CHAIN SAW influence here, including visual homages like a Leatherface yellow apron. And obviously a chainsaw. The last half hour or so really channels TEXAS CHAIN SAW’s relentless go-for-broke-ness, but with more of a part 2 level of gore. Every time I thought it had gone about as far as it would go there would be another great moment or something I wasn’t sure how they did it, like the impressive shot of Ladya lighting Adam on fire. It melts his face but does not stop him and is not the most fucked up thing that is gonna happen to him.

Dara is a cool, weird villain. Near the end she says, “Look at all this. Look what you have done.” Come on, lady. Take some responsibility. But she goes out with a bang. There’s an A+ ending existing at the intersection between “oh shit the Queen is still alive” James Cameron and EVIL DEAD 2 Sam Raimi. Beautiful.

Stamboel had directed one movie before, BUNIAN (2004), on which Tjahjanto worked as a cameraman. In 2007 they decided to direct a short film together, Dara. In 2008 it was included in the anthology TAKUT: FACES OF FEAR and in 2009 they adapted it into this feature.

The Indonesian title RUMAH DARA means DARA’S HOUSE, which I think is better. As of this writing it doesn’t seem to be available for streaming in the U.S., but I was able to order a Canadian DVD released by a company called Mongrel Media for a reasonable price on ebay. (Amazon has other options for people with region free players.)

As a team, The Mo Brothers later made KILLERS (which started out too graphic for the mood I was in the time I tried to watch it and I’m still working up the guts to try again) and HEADSHOT (which I loved). Tjahjanto transcended to legend status with THE NIGHT COMES FOR US, has also done the horror series MAY THE DEVIL TAKE YOU, and is currently preparing the English language version of TRAIN TO BUSAN. Stamboel has done three of his own (DREADOUT, THE QUEEN OF BLACK MAGIC and IVANNA VAN DIJK) and IMDb still thinks he’s doing a Yayan Ruhian/Mark Zaror team up called ONE GOOD THING, but I heard about that one years ago so I’m not sure if it’s really happening.

According to Wikipedia, Tjahjanto hinted on Twitter in 2020 that they might do a MACABRE sequel. I couldn’t find the tweet to see the context, but it would be exciting to see them bring their current skill levels and resources to an amped up Ladya vs. Dara rematch. Then again, any movie from these directors is exciting.

Arifin Putra Ario Bayu cannibals chainsaw fight Daniel Mananta Dendy Subangil Imelda Therinne Indonesia Julie Estelle Kimo Stamboel Mo Brothers Ruly Lubis Shareefa Daanish slashers Timo Tjahjanto
This entry was posted on Wednesday, October 27th, 2021 at 12:13 pm and is filed under Horror, Reviews. You can follow any responses to this entry through the RSS 2.0 feed. You can skip to the end and leave a response. Pinging is currently not allowed.