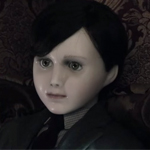 It’s a good “What would you do?” scenario. She came all the way out here, she probly needs the money, and you could assume “nannying” a doll might be easier than being responsible for a living human being. On the other hand, what the fuck, right? You’re gonna get paid by weirdos to pretend all day? Mrs. Heelshire gives her a detailed schedule of everything she’s supposed to do for this doll, has a million strict rules, watches her and keeps telling her she’s doing things wrong. Even if it pays well, how much advanced doll-playing would you be able to stomach?

But the Heelshires are going on a vacation, and Greta apparently doesn’t feel any obligation to play along when they’re not around, so she just figures she’s housesitting. Throws a blanket over Brahms, kicks her feet up, has some wine.

Which kind of creepy doll movie will this be? I didn’t know going in. He definitely seems more haunted (like Annabelle, I believe?) than alive (like Chucky). Either that or TOY STORY was right – toys come to life when nobody’s looking. Things keep getting moved around. She finds him in different places and poses. Sometimes she hears sounds. Foot steps. Laughter. She takes a shower and her clothes disappear. Wrapped in a towel, she follows a sound into the attic and gets locked in there all night. Brahms is a little perv. 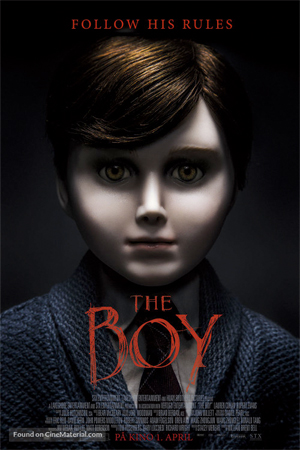 He’s a well-designed creepy doll, prissy little delicate features similar to the son in the old family portrait hanging by the stairs. (Is it just me, or does that painting kinda look like a Mad Magazine cover?) Malcolm (Rupert Evans, HELLBOY, ASYLUM BLACKOUT), who delivers groceries weekly, also grew up nearby, so he fills her in on what the locals know of the back story: the Heelshires had a son named Brahms, he was weird, there were some incidents, he died young, later they got the doll, they treat it as him. Malcolm also flirts with Greta and she seems to take it well, but then things get weirder and the stuff she tells him sounds crazy.

This whole set up works well. Very uncomfortable situation, a little funny, more creepy. A bit of a mystery, mostly easy to piece together, but you don’t know what’s being withheld. There’s a strong potential for ghostiness, but also multiple characters who could always be up to something: the parents, the grocery dude, the scary ex-boyfriend. We know from Greta’s conversations with her friend or sister or whatever back home (voice of Stephanie Lemelin, Frank’s Lawyer’s Secretary, GET THE GRINGO) – a handy exposition device – that that jerk has been trying to find out her whereabouts. Who knows?

And then of course you have the timeless power of a motionless doll sitting in an old, empty house. Looking like he’s staring at you. (And just being alone in a large house in a remote, unfamiliar place has a major creep factor.)

It’s a strong enough engine that I didn’t think it would need to go anywhere hugely surprising. But I was pleasantly surprised by the unforeseen swerve. I will now transition into a BIG LAST ACT SPOILERS section. I recommend not reading this part if you haven’t seen it yet.

It’s a real shocker when a character flips out and smashes the doll to dust, and suddenly an arm reaches out of the mirror. And we learn that Brahms – the real, living boy named Brahms – never really died. He’s grown up and he lives behind the walls! Apparently he’s the one we’ve been hearing, the one who stole her shoes and clothes, the one who moves the doll around when she’s not looking. And the parents know it – that’s why they play the music so loud. I guess they have to hide him, and maybe he’s a danger to them, so they love him remotely, through the proxy of this doll?

So you’re expecting a killer doll, a CHILD’S PLAY or a PUPPET MASTER. Or something more like PIN. But it ends up being closer to BAD RONALD. Bad Ronald was a kid who accidentally killed a girl and his mom didn’t want him taken away so she pretended he was dead and hid him behind a wall. The difference there is that she dies and a new family moves into the house. And also Brahms is more animalistic and wears a creepy porcelain mask like the doll. I’m not sure it’s psychologically plausible, but it’s slasher movie cool, which is more important to me.

Ahoy, THE BOY is a joy, raves outlawvern.com. Don’t be coy. No doy. We’ll see if director William Brent Bell (THE DEVIL INSIDE) and screenwriter Stacey Menear can keep it going with BRAHMS: THE BOY II, due in December. It’s no longer about Greta – Katie Holmes and her family move into the mansion without know about Brahms. I’m not sure if the premise can hold up for a sequel, but I’m impressed that they’re kind of following the RAMBO: FIRST BLOOD PART II / BRADDOCK: MISSING IN ACTION III naming convention.

Ben Robson creepy dolls Diana Hardcastle Jim Norton Lauren Cohan Rupert Evans Stacey Menear William Brent Bell
This entry was posted on Thursday, October 3rd, 2019 at 2:19 pm and is filed under Horror, Reviews. You can follow any responses to this entry through the RSS 2.0 feed. You can skip to the end and leave a response. Pinging is currently not allowed.

4 Responses to “The Boy”