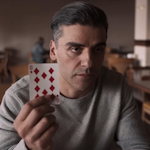 Like the title says, he can count cards. He explains the concept of it – keeping track of the cards being played to calculate his odds, saving larger bets for when they lean in his favor. He explains how he travels around to different casinos, telling us his strategies for different games, and his philosophy of making enough money to keep going but not enough to get the casinos after him. I’m not a cards guy or a gambling guy so I don’t really give a shit if some of it is wrong (as I read some claim). I’m happy to accept that he knows what he’s talking about, and I can follow enough of it to get by.

On the road he runs into the same people over and over again, they make small talk, remember where they saw each other last. We see various players with their performative gimmicks, wearing their hoodies or sunglasses or headphones. There’s some Ukrainian guy (Alexander Babara, TRIPLE 9) everybody hates who dominates many of the events wearing gaudy American flag clothes and with two flunkies who chant “USA! USA!” when he wins. These characters kind of remind me of the bit parts in later Clint Eastwood movies. I wonder if any of them are real card players making cameos? They’re very true to the principle that things that pass for cool in the world of poker – as in wrestling or anime – come off as completely dorky to the uninitiated. 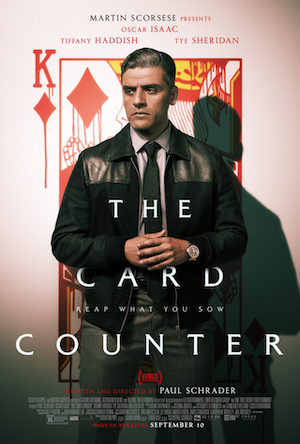 Schrader continues mostly in the intentionally plain style he used for his previous film, FIRST REFORMED. I’ve heard that it’s based in the findings in his 1972 film theory book Transcendental Style in Film: Ozu, Bresson, Dreyer, but also that the narrow 4:3 aspect ratio was inspired by Pawel Pawlikowski’s IDA. I like the simplicity of the camerawork, but the most noticeable aspect is the clean looking digital cinematography of Alexander Dynan, working with Schrader for the third time. In stills it looks good but in motion it looks more video-y than I prefer at times. I miss the style of older Schrader movies. CAT PEOPLE, AMERICAN GIGOLO, especially MISHIMA, obviously – those are beautiful looking movies. I think these movies would look amazing if he shot them the same but on 16 mm or did something to give them more texture, but I guess that’s not the experience he’s trying to create. And anyway I’m a guy who would be excited if all his movies still had synthy, disco-y soundtracks by Giorgio Moroder. He’s not stuck in the past the same way I am.

It also must be said that this look fit FIRST REFORMED thematically because of the ascetic lifestyle of its pastor protagonist, and THE CARD COUNTER because it reflects both the regimented, antiseptic way Tell prefers to live since prison and the generic, repetitive feel of the casinos and hotels he cycles between.

(I was excited when I saw the Golden Nugget sign in the trailer, thinking it was the place I’ve stayed in Las Vegas, but it was actually a Golden Nugget in Biloxi. Part of the movie is in Vegas, but it’s mostly smaller casinos in less glamorous places, which is much better for this story. I know this was a Covid era movie – I wonder if they took advantage of that window when the casinos were all closed?)

The look also contrasts well with the one straight up phantasmagoric sequence, making that part of the movie all the more of a gut punch. The subject of THE CARD COUNTER was hidden in the trailer, though I knew about it from the headline of the Daily Beast review. But I consider this a SPOILER. Like many a crime fiction anti-hero (and this kinda is a crime story, or is adjacent to one), Tell is an ex-con. We see some of his 8 1/2 years in prison as he talks about what he learned from it – including card counting and discipline. He never claims to have been innocent, so we know he has some kind of dark past, and some odd things that happen make us wonder what it’s all about.

And then he has a nightmare about it, really breaking the previous style of the movie. His dream is about Abu Ghraib, and it’s all depicted in a continuous shot floating through its filthy, shit-stained hallways, floors wet with God knows what, a new horror unfolding around every corner, soldiers strutting around laughing as prisoners scream in pain, cower, covering their genitals, are humiliated, threatened, barked at by a German shepherd. And Schrader and Dynan use some sort of fisheye lens or effect that bends the bottom of the image into a weird funhouse mirror/kaleidoscope kind of thing that makes it all the more stomach-churning.

It’s an interesting coincidence that this is coming out right after the end of the war in Afghanistan, as people who turned a blind eye to, quickly forgot, or even tried to justify the atrocities done supposedly in the name of our safety now portray ending the war as the immoral act and humanitarian disaster. The depiction of Abu Ghraib here is so repulsive it feels almost wrong watching it – a sign that it’s something we haven’t faced thoroughly enough, I think.

Tell would certainly like to forget it, but here he is in a casino where there’s a law enforcement/security conference going on, and he sees a flyer for the Major who trained him in interrogation techniques (Willem Dafoe, THE LOVELESS) giving a talk as a respected expert on facial recognition software or some shit. I like the detail that Tell intentionally came to gamble here now because, he says, once cops get a few drinks in them they think they can do anything. But the coincidence draws him in, and a young man named Cirk (Tye Sheridan, THE TREE OF LIFE) spots him leaving the talk and weirdly gives him his phone number. Tell does meet with the kid, and finds out his story: his dad was at Abu Ghraib too, got in trouble for it too, came home fucked up, beating on the family, eventually shot himself. And his kid wants some payback on the guys who just got to go on with their lives.

FIRST REFORMED had a righteous anger about an undeniable outrage: government and big business refusing to stop the practices that are rapidly hurtling us all toward environmental catastrophe. For THE CARD COUNTER, the outrage is the lack of accountability for the architects of these acts of savagery. Cirk says his dad and Tell took the fall as “bad apples” while the “rotten barrel” went free. Only the guards seen humiliating prisoners in photos were punished, he says, not everyone else who did it, or trained them to do it (or created the doctrine to justify training them to do it).

In the Bush era we were concerned about all the criminals from the Iran-Contra era, and even the Watergate era, coming into power again, still fucking shit up all around the world. That group of people got away with Abu Ghraib and Iraq and Afghanistan and so much more. Some of them carried over into the Trump era, and they and their even worse collaborators seem to be getting away with the shit they did then. Here we are with all those assholes who broke into the Capitol and literally and figuratively rubbed shit all over the walls on January 6th rightfully having the book thrown at them, while the much more dangerous people who brainwashed and asked them to do it have yet to suffer any consequences. So this movie feels very of-the-moment even though it’s about old shit. Sadly, it’s timeless.

Tell tries to do a good deed for Cirk in a secret master plan that involves taking up a previously refused offer from another player, La Linda (Tiffany Haddish, “Resistance Soldier,” TERMINATOR SALVATION video game), to hook him up with a backer and play in the World Series of Poker.

Sheridan is really good as a guy in baggy sweatshirts and flip flops, who perpetually looks like he just woke up from an incomplete night of sleep. Tell convinces him to travel with him, tries to be a good influence on him, but how can that happen in this lifestyle? He’ll say he’s having fun but seems understandably bored and depressed. One of the only things that he seems a little positive about is that he likes La Linda and encourages Tell to have a relationship with her.

Haddish occasionally seems constricted by the dialogue and not being able to joke and riff much, but she brings some light in the middle of this dark tale, and it’s cool to see her in a romance with Isaac. They’re both such movie stars in general, but the love story feels very human and down to earth, as both characters are a little shy and awkward about making it happen. (And to think he wouldn’t have necessarily run into her again if he hadn’t reluctantly gone from one shitty casino to a different shitty casino with some acquaintance he doesn’t seem to like very much named Slippery Joe [Bobby C. King, stunt coordinator of STARSHIP TROOPERS 2: HERO OF THE FEDERATION]).

THE CARD COUNTER works in a world compatible with our pulp/crime story tastes, but it pretty much rhymes with FIRST REFORMED: a middle aged man who seems satisfied with his lonely, self-disciplined lifestyle tries to help an angry, damaged younger man, fails, and is spurned to extreme action in the name of the younger man’s legitimate moral outrage. I don’t think it’s quite as good – one of the most shocking scenes is staged in a way that comes off a little silly, and it was more novel to center this type of story on a pastor. But I really like the way Schrader circles around similar storylines and themes and techniques again and again, with different variations, coming from different angles, coming to different conclusions, coming up with new ways to do it. It’s kind of the same thing he admires about the directors he wrote about in that book, and the same thing Tell says he’s doing going from city to city, casino to casino, game to game, hand to hand. Luckily Schrader can probly do this without it leading to any vigilante bloodshed. So I hope he keeps going.

Bobby C. King gambling Oscar Isaac Paul Schrader Tiffany Haddish Tye Sheridan Willem Dafoe
This entry was posted on Thursday, September 16th, 2021 at 12:39 pm and is filed under Crime, Drama, Reviews. You can follow any responses to this entry through the RSS 2.0 feed. You can skip to the end and leave a response. Pinging is currently not allowed.

14 Responses to “The Card Counter”