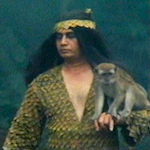 Previously on Vern Tries To Learn About Indonesian Super Heroes:

The 2019 film GUNDALA caused me to read up a little bit on the other Indonesian comic book characters who will be part of an MCU-inspired franchise called the Bumilangit Cinematic Universe. It turned out some of them had been in movies before, and I was able to find THE DEVIL’S SWORD, about a character named Mandala who will be played by Joe Taslim in the BCU.

The character that sounded coolest, though, was Barda Mandrawata, The Blind Man From the Ghost Cave, a.k.a. Si Buta (“The Blind” or “The Blind Man”). I was intrigued partly because he’s a warrior who poked out his own eyes to learn how to defeat his blind enemy, partly because he has a pet monkey, and partly because his new movie is to be written and directed by Timo Tjahjanto (HEADSHOT, THE NIGHT COMES FOR US).

I was able to find two ’80s movies about Si Buta. The first was THE WARRIOR AND THE BLIND SWORDSMAN (1983), in which the character crosses over into part 2 of a trilogy starring THE DEVIL’S SWORD’s Barry Prima as a different character. The blind swordsman was cool looking, but I didn’t get very into the story and didn’t have enough to say about it to write a review.

I had better luck with BLIND WARRIOR, original title SI BUTA DARI GUA HANTU: NERAKA PERUT BUMI (THE BLIND MAN FROM THE GHOST CAVE: EARTH UNDERBELLY HELL). It’s either a 1987 film that’s a sequel to a 1985 film, or IMDb has the one movie listed twice. (Based on translating from Indonesian Wikipedia, I think it’s the latter.) It’s from the same director as THE DEVIL’S SWORD, Ratno Timoer, who also stars as Si Buta.

Like all the coolest characters, Si Buta starts the movie just wandering over some mountains, holding a monkey, with a nice theme song ballad playing. Nearby, some swordsmen are massacring a village. Houses are on fire. They force the villagers to mine gold for a brutal despot called Raden Parna. Which I’m against. 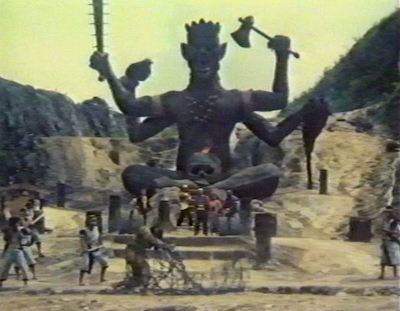 Raden Parna is a sick motherfucker, but has a pretty cool lifestyle in some ways. At his crib he sits on a throne in front of a giant statue of a demonic-looking god that has an ax, a spiked club, and light-up red eyes. Much like THE DEVIL’S SWORD, I like how some of this will seem very chintzy compared to the cinema of other regions of the world of the same period, so then when there’s a huge, elaborate set it seems really impressive. I’m not sure, but they might’ve even built two versions of this statue, because the night scenes seem like a soundstage but the day scenes don’t.

Parna’s people celebrate his “great triumph of defeating those enemies who have rejected us and opposing us” by sacrificing a virgin during the full moon. That means she falls into a hole that drops her down a slide into a pit of little pink pellets. Like a cross between the Chuck E. Cheese ball pit and Dippin’ Dots. But pretty. 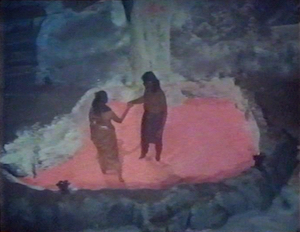 Parna doesn’t have to take the slide – a mouth-shaped cave door opens, and he struts in. I like how the set looks like a painting. I don’t like how she has to have sex with him. This would be a really cool location for a sex scene though if it was consensual.

Elsewhere, a young woman who I believe is called Sari (short for Sarimbi) goes to the river to get water, despite protests from her dad and her brother Yagi that it’s not safe. They understand that fuckin Parna thinks she’s cute and wants to make her his queen. On the way there she sees Si Buta and his monkey just chillin in the woods, and you don’t see that everyday, but she keeps walking.

At the river, Parna’s asshole troops attack all the women doing laundry and try to kidnap Sari, but suddenly Si Buta flies in and kicks some ass. The men go back to Parna empty-handed and claim that this guy who whooped them is “just like an eel, impossible to catch,” but they still get yelled at and kicked over like a bunch of bowling pins. 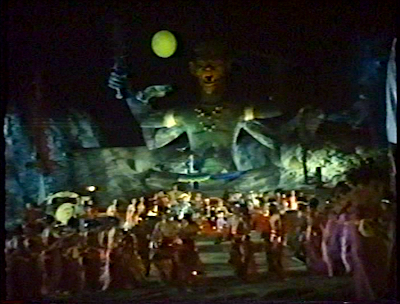 Si Buta wants to stay out of this shit, but he has some strong words about Parna and his men. He calls Parna “the forerunner of Satan” and says that “these torturers are all animals disguised as humans, sons of Satan.” Some theorize that Si Buta is “the Blind Warrior prophesied by the holy Koranga.” I know nothing of this prophecy, but if it mentioned having the power to throw a boulder-sized cluster of rocks into the air and then throw a spear into them so they explode everywhere, this is probly the guy. Also he can create fires with his mind. Check if it mentions that.

Eventually Parna himself comes to the village to demand Sari – or as he calls her, “that pretty girl” – as his bride. She says, “I thank you for your very kind offer,” which he does not take well. Si Buta intervenes, and it’s a little fucked up (in an interesting way) because he seems to be less bothered by the attempted abduction than by Parna cynically using religion as cover for it. “You take young girls from these villages not to use them as offerings, but to satisfy your own lust.” I genuinely think if it was for a real sacrifice he’d be okay with it! Harsh. 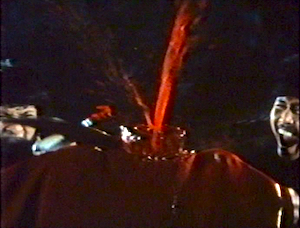 Because Parna does not know how to handle rejection in a healthy way, his boys massacre the village, including Sari’s father, and then he tries to put it on her: “If you hadn’t rejected me, there would not have been this disaster.” And when she tries to tell him off he says, “Such a pretty girl as you shouldn’t be talking such nonsense.” Fuck this guy. 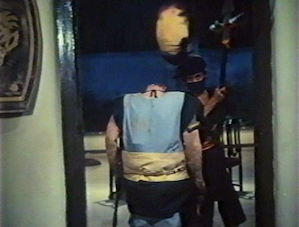 Si Buta has had enough, so he gets Yagi to rally the (surviving) villagers while he goes to confront Parna. They capture him in a net of chains and throw him into “a hole deep down in Hell.” I’m not sure if this is the Ghost Cave or an actual underworld (or if they are one and the same). He says that it smells strange, and some women come out and tell him it’s between light and darkness, between fantasy and reality, between the blood of battle and the love of peace, etc. Maybe it’s also between smelling nice and smelling like ass. He calls them “the forerunners of Satan the Beast” (which is kind of rude) and they turn into ashy zombies. But I feel like their information was accurate. Anyway he’s up to the mental challenge of being the first person to survive this place. He faces off with his inner self and manages to climb out.

I enjoyed the story, and the violence more than makes up for any draggy stretches. There’s some good beheadings and guys getting chopped in half at the waist. The final battle has two absolutely classic kills:

#1: He gets Parda’s right hand man by teleporting onto the giant demon statue and making its spiked club break off and crush the guy.

#2: During his duel with Parda he just stabs him right through the mouth with his stick, impaling his head – an impressive makeup effect. Then he tears the head off and kinda jai alai tosses it onto a torch thing, and he leaps away because somehow he knows the head is gonna explode and then the statue is gonna explode. Heads up, motherfucker. 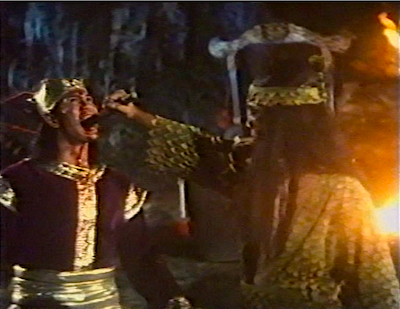 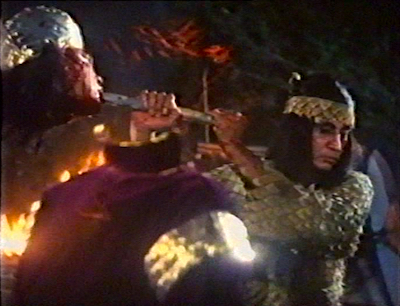 At the end the villagers ask him to stay (always useful to have a guy like that around, plus they probly like petting his monkey) but he says he has other things to do and is destined to leave, so he wanders off, just like he wandered in. 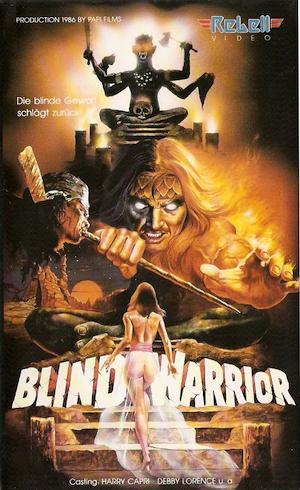 Timoer returned as both star and director in his last film, a 1990 sequel called SI BUTA DARI GUA HANTU: LEMBAH TENGKORAK (THE BLIND MAN FROM THE CAVE OF GHOSTS: VALLEY OF SKELETONS). I’m more confident that one’s a separate movie because there’s a plot summary on IMDb and it’s different from this – Si Buta comes to a village where a leprosy-like illness is going around, and helps fight off bad guys who are thwarting the delivery of medicine.

I don’t know how to get ahold of that one, though. This one I only found on a questionable grey market type DVD transferred from VHS. Hopefully some day there will be nice remasters of some of these movies. They’re pretty fun and I bet they’d be a knockout if Arrow or Vinegar Syndrome or somebody like that got to clean them up.

Indonesia Ratno Timoer
This entry was posted on Thursday, June 3rd, 2021 at 12:57 pm and is filed under Comic strips/Super heroes, Martial Arts, Reviews. You can follow any responses to this entry through the RSS 2.0 feed. You can skip to the end and leave a response. Pinging is currently not allowed.