The State of Affairs in Badass Cinema, first week of April 2010

There seems to be alot of trailers and announcements and shit related to the sorts of pictures we’re interested in around here, so I figured I’d round them up so we can discuss them. Also, it is always exciting to have a picture of a bunch of cars exploding.

According to a Collider interview with producer Neal H. Moritz about the upcoming fifth FAST AND FURIOUS movie (once again teaming Vin Diesel, Paul Walker and director Justin Lin) “the goal is to bring touchstone characters from each of the movies back.” I suspect this means I’ll get my wish of Lucas Black from TOKYO DRIFT at least making a cameo. After all, Han is dead, and Sonny Chiba doesn’t drive. And hell, I hope they throw in a Tyrese from 2 FAST 2 FURIOUS. Why not?

The same interview tells us that Lin is still set to direct a remake of HIGHLANDER after the FURIOUS movie. And they said there could only be one. So naive.

In other Dieselnews, it looks like he really is gonna complete the Furious/Riddick/xXx trifecta, returning for xXx 3: WE WILL EXPLAIN WHAT THE DEAL WAS WITH THAT DVD EXTRA WHERE IT SHOWED XANDER CAGE DYING which has moved to Paramount. Rob Cohen will be directing again which is a little disappointing because honestly I think the first one is pretty boring and I was hoping someone could inject some energy into it like Justin Lin did with TOKYO DRIFT. But Cohen has done some pretty funny crappy movies, and this one will be in (this is gonna fuckin blow your mind [you’ll never guess what I’m about to say {please nobody shit your pants}]) 3-D!

It’s also important to remember that before Diesel and Cohen decided to lend the series to Ice Cube for a while Cohen had claimed part 2 was gonna be an anti-Bush movie and part of it would have Vin Diesel riding a mountain bike up the capital dome. So hopefully he will come up with some equally ridiculous shit for this one. May I suggest some of those Yetis from TOMB OF THE DRAGON EMPEROR?

Kungfucinema.com reports  that Well Go USA purchased the rights to release IP MAN and IP MAN 2 in North America. So if you haven’t gotten ahold of an import yet they’ll be bringing it to you like they have a bunch of the Shaw Brothers movies. Part 2 hasn’t come out yet in Asia, but the first one won the Hong Kong equivalent of the best picture Oscar. I think it’s one of the best martial arts movies of recent years, and pretty much everyone I recommend it to ends up loving it.

A Watchable Movie Starring The Rock?

I mentioned this one before but to give everyone some hope for our man Dwayne Johnson, I wanted to spotlight the movie he’s working on now to be released in November. It’s called FASTER and it uses a classic straightahead action movie topic: ex-con out to avenge his brother’s death after they were doublecrossed in a heist. I’m not sure who the villains are, but they got Billy Bob Thornton and Carla Gugino as the cops chasing after him. 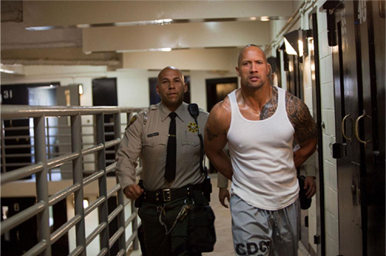 It’s written by the Gayton brothers (Joe Gayton wrote UNCOMMON VALOR and THE SHEPHERD: BORDER PATROL) and the director is George Tillman Jr. He doesn’t have a history in action, but his last movie was the Biggie Smalls bio NOTORIOUS which was better than I expected and pretty gritty. The Rock told MTV “[‘Faster’ is] like a mix between ‘The Good, the Bad & the Ugly’ [and] ‘Bullitt.’ It has an old-school texture to it where no one has names. There’s the Driver, the Killer, the Cop, the Evangelist, the Woman,”

And now an alphabetical roundup of recent action related trailers.

I know Joe Carnahan is a mixed bag, and the TV show was stupid, but I still got a soft spot for these characters and this type of fugitive-super-team concept. I really like how much they made the characters look and act like the ones from the TV show. In fact, I’m pretty sure they grew Bradley Cooper out of Dirk Benedict’s DNA (hopefully before he got infected by the snake virus or whatever in SSSSSSSSS!!!)

Speaking of super-teams, this is obviously the action movie event of next summer, even if it comes out in August. This is much better than the rough commercial reels that got out earlier – it seems more serious, it’s got the corny narrator, and it emphasizes the amazing cast list like it should. I wish they hadn’t shown the Bruce and Arnold cameo, but I guess that’s one way to sell the movie. Also I could use more Dolph.

From what I can see this movie has really evolved from the script that I read way back when, and that’s a good thing. It was fairly solid back then but could use some sprucing up, which they seem to have done. I’m starting to wonder if Mickey Rourke will be in it more than I expected.

I don’t know about this one but it’s directed by James Mangold (WALK THE LINE) who seems like a pretty smart guy. And Tom Cruise is wise to go more comedic and play off his reputation as a nutball.

Speaking of Tom Cruise, I think this was originally planned as a vehicle for him. It’s directed by Phillip Noyce (DEAD CALM, BLIND FURY) and written by Kurt Wimmer (ONE TOUGH BASTARD) and Brian Helgeland (PAYBACK) and as you can see it’s got Redbelt in there. I think they’re kind of selling this as a female BOURNE, but the first trailer looked more like a white U.S. MARSHALS. Anyway, could go either way, but I like the idea of Angelina Jolie as an asskicker on the run, and I still keep hoping Helgeland will be great again. I’ll give it a shot while I’m waiting for Soderbergh’s KNOCKOUT.

I wonder who plays Pepa, though.

This entry was posted on Saturday, April 3rd, 2010 at 6:16 pm and is filed under News. You can follow any responses to this entry through the RSS 2.0 feed. You can skip to the end and leave a response. Pinging is currently not allowed.

53 Responses to “The State of Affairs in Badass Cinema, first week of April 2010”