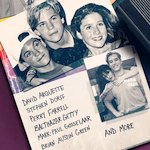 Four seasons later the show was cancelled, Frye’s next sitcom pilot didn’t get picked up, and for the most part all we knew about her post-Punky life was a story from People Magazine or something about how her breasts grew unusually large, she got sick of being teased about it and got reduction surgery before her sixteenth birthday. There were some guest appearances (The Wonder Years, Saved By the Bell) and some b-movies (PIRANHA, PUMPKINHEAD II), but mostly she was a wacky relic of ‘80s pop culture who had grown up and started a family and hopefully ended up in a healthier place than some of her peers.

1) starring in a new Punky Brewster show on Peacock (a sequel with the same title as the original, like HALLOWEEN) 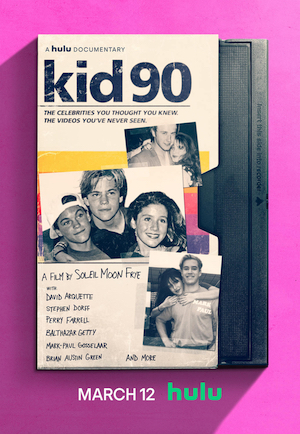 2) directing a legitimately good documentary memoir about her teenage years.

The doc, which is on Hulu, is called KID 90, and it’s made possible by the odd fact that Frye not only obsessively videotaped herself and her friends, but saved boxes full of answering machine tapes and diaries. In new footage she explains how she stored all these away for decades until recently deciding to go through them for the first time.

The result is an amazing document of a time, place and lifestyle one would normally only know about from talking head interviews. We see that pre-teen and teen Frye was part of a circle of young actors, some we know as faces from TV shows and teen magazines of the time, others as future stars. Stephen Dorff, Brian Austin Green, David Arquette, Mark-Paul Gosselaar and Balthazar Getty are seen on the tapes as well as sitting down with Frye now to reflect on what they went through together. We hear her in phone calls crushing on Johnny Depp and Charlie Sheen. We hear voicemails from Mark Wahlberg trying to get a date. She reads impassioned teenage poems and diary entries. There are glimpses of Leonardo DiCaprio boasting that he’s grown taller since he last saw her (Leo also executive produced the movie through his company Appian Way). 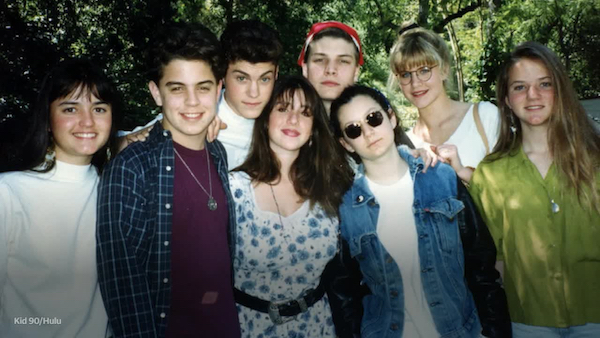 The kids hang out at her house (her mom seems cool), they have parties. She likes to ask people their philosophy on life, and most of them come up with something a little less stupid than expected. Sometimes sadder. People who play sassy kids on TV still have dark thoughts like anybody else. There’s a tape of Frye’s manager angrily scolding her for saying ‘fuck’ in a message on his answering machine, because what would people think if they heard sweet little Punky Brewster say ‘fuck’?

This is gonna lock me into a specific age and time, but I was one of the kids who watched Punky Brewster. I remember as an adult being surprised to come across an article about it being voted the worst TV show of the year. It makes perfect sense that grown up people saw it as trash, but I didn’t realize it at that age. The jokes seemed funny to a kid, we liked TV characters who got to dress colorfully, and there was that insane Halloween episode where they got trapped in a haunted cave and had to spear a giant spider to death. Reading about it now I must not have seen the two seasons made for syndication (she runs a teen hangout burger joint in the mall called Punky’s Place?) but it imprinted on me enough that I admit I’ve been drawn into watching several episodes of that new Punky Brewster .

I’m not gonna try to convince you it’s good. I would love if it was some postmodern one-camera show like Cobra Kai, but it’s a traditional multi-camera sitcom with those familiar joke rhythms that make me feel weird because I stopped watching shows like that a couple decades ago. But nostalgia is a hell of a drug.

Punky is a mom now, with one biological daughter and three foster children, including a new one named Izzy obviously meant to be the Punky character. But the show is mostly about grown up Punky parenting and dating – it seems aimed at people who watched it then and are now old. There are many ties to the original show: Punky is still best friends with Cherie (Cherie Johnson), whose friendship with Punky led to her working at Fenster Hall (the shelter for orphans); they live in what is meant to be Henry’s apartment; Punky picked up Henry’s love of photography; they have a dog named Brandi that looks like Brandon, maybe a descendant. So far no references to Glomer or the giant spider, but I got hopes for the latter.

I find it interesting to compare and contrast the show’s modern values to to those of the original show. It’s in the spirit of “Punky Power” how much it encourages acceptance, individuality and non-traditional families, to the point where the kids think Mom is being kind of a dork about it all. There’s stuff you never would’ve gotten in those days about gender identity, and Cherie is a lesbian (like the actress who plays her), and these are wisely treated as normal parts of life, nothing remotely Very Special Episode about them. There’s also something very sweet about how Punky’s ex-husband Travis (Freddy Prinze Jr.) is treated as a family member even though he doesn’t live with them.

One of my strongest memories of the original show is the episode where Punky is pressured by cool kids to use drugs to get into their club. She resists, starts a rival “Just Say No Club” and at the end is seen in a real life “Just Say No” parade with Nancy Reagan! So I was wondering what this grown up, cool Punky would do if she found a joint in her daughter’s bedroom, and sure enough I got to find out. She handles it well – telling her daughter she’s not mad but wants to talk about it. It’s acknowledged that it’s legal now, and a fun thing for adults to do (at some point she seems to have just said yes!) though Travis is really embarrassed when he finds out it was his joint and his daughter was covering for him.

KID 90 also pokes fun at Frye’s P.S.A. past, intercutting her emphatic anti-drug appearances as a child star with her and her friends smoking, drinking and puking. One scene lingers on a few of them having an absolutely euphoric time parked out in the desert while on shrooms. In the present day interviews, one still remembers that day fondly.

Not to say that Nancy Reagan was entirely wrong. For some in Frye’s circle of friends, the drugs become a serious problem. Depression seems like a bigger one. Looking back at the tapes, Frye recognizes cries for help that she didn’t pay attention to. The movie gets very sad and dark, and it’s hard to listen to STEPFATHER II star Jonathan Brandis’s messages trying to get ahold of her, knowing that he ultimately committed suicide when he was only 27. Frye loses way too many friends, including Rodney Harvey from DELIVERY BOYS. She also comes to terms with a sexual assault she never told anyone about, and plays a (distorted) recording of the perpetrator.

There are so many twists and turns in this thing. I had no idea that she was in love with a dude from House of Pain, that’s a major part of it. She reveals the celebrity she lost her virginity to, which I think you will agree with me is an unsettling revelation, but she seems happy about it. There’s a section where she moves to New York and ends up living with the skater boys from the movie KIDS. I don’t know why but I think it’s so nice that they thought she was cool instead of scoffing at her for being Punky Brewster.

All of this would have a certain nostalgia and gossip interest if it was the usual film clips and interviews of pop culture retrospective docs, but the inside view via these home videos makes it fascinating. She even uses footage of her going in to get the breast reduction surgery. And of her giving birth! I’m sure some people will be going through pausing the many photo collages showing her with all kinds of random people. Les Claypool is in one of her videos. She interviews Perry Farrell, for reasons that are not really explained (but I think she knew him from shooting footage during Lollapalooza). 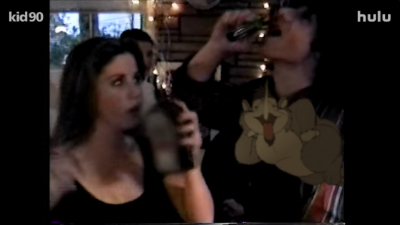 In the end you get not only a glimpse into a life, but a view of the importance of friends who know what you’ve been through. I had no idea of the bond forged over decades between Punky Brewster, Dewey from SCREAM, and motherfuckin Deacon Frost from BLADE. These seem like a good bunch of people – you feel for those they lost, and are glad they had each other. And it seems like Frye got by and made all this happen by trying to be very true and honest to herself. I noticed as she talked about her dad (an actor who was not there for her but loved her and stayed friends with her mother) and her first love (a musician who she grew apart from but still has great love for) that she seems to have put some of these experiences into the updated Punky Brewster. Who would think a show like that could be deeply personal?

What I’m saying is that she has made a good documentary here and she was able to do it because of her Punky Power.

Balthazar Getty Brian Austin Green David Arquette Jonathan Brandis Leonardo DiCaprio Mark Paul Gosselaar Mark-Paul Gosselaar Soleil Moon Frye Stephen Dorff
This entry was posted on Wednesday, March 17th, 2021 at 3:19 pm and is filed under Documentary, Reviews. You can follow any responses to this entry through the RSS 2.0 feed. You can skip to the end and leave a response. Pinging is currently not allowed.