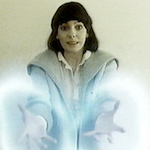 It’s a low budget movie shot in Wisconsin – on film, though. Don’t worry. It has a little bit of the awkwardness and amateurishness that can make regional horror charming, which serves to make it more impressive when some of it seems pretty legit. The lead couple give fairly natural performances, the most inconsistent actor turns out to be an endearing character anyway, things that wouldn’t be impressive in a bigger production – like a guy jumping through a window and hitting the ground, or getting a nice shot of the fog or a frozen lake – seem triumphant. And it’s very weird. Sometimes in a goofy way, usually in a pretty cool way. 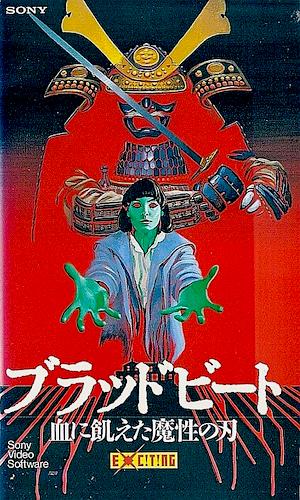 Like that movie BODY that I reviewed recently, the Christmas tie-in is that it’s the reason some kids are home from college when the shit goes down. Siblings Ted (James Fitzgibbons) and Dolly (Dana Day) bring Ted’s newish girlfriend Sarah (Claudia Peyton) to stay with their space cadet mom Cathy (Helen Benton) and her boyfriend Gary (Terry Brown; the only cast member to continue acting in movies, he went on to bit parts in DARK RIDER, MY SAMURAI, COPYCAT, THE PRINCESS DIARIES, RAISING HELEN and an episode of Nash Bridges).

Gary is responsible for some of the goofiest behavior in the movie, but I like him; he puts up with weird-ass Cathy’s not-great acrylic paintings and talk of psychic visions, and just wishes she’d marry him. She keeps breaking his heart by brushing him off, and he keeps almost walking out. One time they argue and it seems like it’s over but then he sits on the floor and watches TV with headphones on. 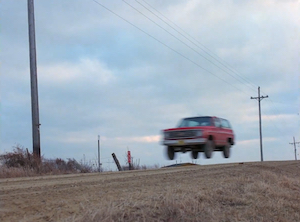 Gary and the kids seem to really like each other, partly because they go deer hunting together. They also bring along Uncle Pete (Peter Spelson, previously in MAIN STREET EAGLE and THE PSYCHOTRONIC MAN), who they also call by his CB handle “The Red Baron.” A rare instance of humor in this movie (I think) is his introduction driving his truck so fast he catches air.

Sarah is much more relatable than Cathy, but brings alot of drama to this trip, because those two women immediately fear and dislike each other for presumably psychic reasons. Ted is just kind of confused by it all and doesn’t pay much attention until Sarah flips out during a hunting excursion, scaring away a deer. I’m not sure they understand it’s not a coincidence (or maybe I’m the one who misunderstands) but during her freak out she discovers a stranger with his belly cut open.

The mythology of the movie is ambiguous. Sarah finds a samurai helmet, mask and sword in a trunk, but it may have been her imagination. As she has sex with Ted, there are scary closeups of a Buddha statue watching them, and the samurai is stalking someone elsewhere, and she often is in bed writhing and orgasming when the samurai is elsewhere killing. There’s an EVIL DEAD/POLTERGEIST type incident where everything in the house shakes that seems like it would be the climax, but happens earlier.

The score alternates between some pretty freaky synth stuff and classy violin music (library, I assume). Most of the climax is set to Carmina Burana (a.k.a. CLIFFHANGER trailer theme). My favorite stylistic thing about the movie is the huge amount of optical printing type effects – lots of very artificial, painted on glow. There are some shots that look like Predator-vision, and some colorful flashes when Sarah has some kind of psychic event. My favorite part is when, during the house-shaking scene, the samurai stabs his sword through the window, and it’s glowing blue. A very close runner up is when Cathy’s hands start, you know… doing magic stuff or whatever. I’m sure they didn’t intend it to look as artifical and stylized as it does, but I like it. It’s almost as much graphic design as visual effect.

A small thing that I like, because it’s unusual, is that real products are featured in special effects sequences, so there are flying Pepsi and Tab cans, and a Nestle Quik container. And I think this is because they just didn’t know you weren’t supposed to do that, and then nobody said anything.

For those who require logic and explanations in their movies there’s no way you’re gonna take this as seriously as I did. It makes no sense, as far as I can tell. But I think it has an effective fever dream quality to it. I didn’t really find it laughable until they were (SPOILER) shooting magic beams out of their hands, and I’m not confident I could explain what the twist is at the end, but the audaciousness of all that makes it admirable to me, if not completely satisfying.

At various times BLOOD BEAT reminded me of THE EVIL DEAD, HAUSU, a whiff of SCANNERS, a drop of NINJA III: THE DOMINATION. It has the ephemeral oddness of something that can’t quite translate from another culture, so I thought it made sense when I read that the writer/director is French. Like so many directors of obscure horror movies Fabrice-Ange Zaphiratos did not continue in the business. His only other film work is co-writing and starring in a 1977 film called LA GRANDE FRIME, directed by his father Henri Zaphiratos. For BLOOD BEAT he also wrote the screenplay, co-composed the score (with Chris Zaphiratos) and performed the aforementioned window stunt.

I didn’t notice any major behind-the-scenes people on the credits, but cinematographer Vladimir Van Maule also shot the CHOCOLATE CITY movies and something called CHOKER a.k.a. DISTURBANCE, directed by the son of the guy Viggo Mortensen played in GREEN BOOK. He shot this in 4:3 because he misunderstood and thought it was a TV movie, and nobody noticed until well into shooting.

I might have to rent that Vinegar Syndrome blu-ray to see if there’s more to understand about this one – there’s a director’s commentary where he apparently explains it by saying he was doing alot of drugs, but I’m sure there are still interesting things to be said about it.

This one is not strongly Christmas themed. There’s a Christmas tree at the house (it gets shaken around violently by supernatural happenings), some talk about presents, a cop who wishes them a merry Christmas, and a little bit of fake off brand Christmas music ala CHRISTMAS EVIL. But I offer that (perhaps unintentionally) it ties in with the old tradition of telling ghost stories on Christmas. The Puritans stopped that from becoming a thing here in the States, outside of our fascination with A Christmas Carol. But I’m no Puritan. I’m watching BLOOD BEAT for Christmas.

ghosts regional horror samurai Wisconsin
This entry was posted on Tuesday, December 15th, 2020 at 11:31 am and is filed under Horror, Reviews. You can follow any responses to this entry through the RSS 2.0 feed. You can skip to the end and leave a response. Pinging is currently not allowed.