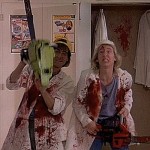 Monday morning I heard a phrase on the radio that surprised me: “men, women and chain saws,” said in a somewhat dismissive voice.

What the hell? This was a weird coincidence. Men, Women and Chain Saws: Gender in the Modern Horror Film by Berkeley professor Carol J. Clover is a very academic book exploring gender issues in slasher, possession and rape-revenge films, mostly from the ’70s. I read the book years ago and it really affected my view of slasher movies. I paraphrase it alot when defending these kinds of movies (a pretty regular past time these days).

I think it’s been an influential book, but I don’t know anybody else who’s read it, so it was a surprise to hear it on the morning news. I had read it mentioned recently in the Fangoria horror magazine, when Quentin Tarantino mentioned it in an interview about Death Proof. It’s not surprising he read it. In the first half of Death Proof he uses alot of the slasher movie conventions discussed in the book, setting up Butterfly as what Clover calls “the Final Girl.” The biggest clue is that she has “the investigative gaze,” she’s the one who notices Stuntman Mike’s car and keeps eyeing him, and is scared of him. No one else realizes anything is wrong. Ordinarily this would mean that she would go on to survive and defeat, escape from, maybe even kill Stuntman Mike. But, well, maybe some other time. (Of course, he ends up making what is more obviously a feminist movie, not having to even have the women tormented too much before they want to spit on somebody’s grave.) 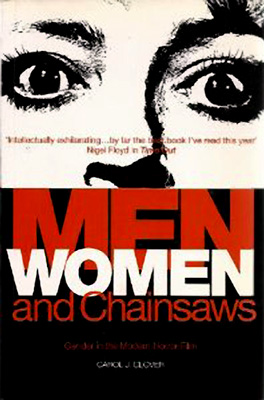 After Tarantino’s interview reminded me I thought I should read the book again, so I ordered a used one online. There’s alot more Freudian shit in there than I remembered, but it holds up. Clover’s main argument is that the slasher genre in general is not as misogynistic as its critics would have you believe. The book seems to be a response to critics like Siskel and Ebert who had crusaded against slasher movies in the wake of the Friday the 13th movies. She argues — and I think she’s completely right — that when an audience watches a movie like Texas Chain Saw Massacre or Halloween, or their lesser cousins and nephews, their sympathies lie with the victims. Although they may cheer when Jason squeezes a skull just right so that an eyeball pops out in 3-D, they will cheer louder when the Final Girl gives him what’s what. Many critics condescendingly assume that horror fans are crazed sadists popping boners from the torment of women. But Clover shows example after example after example of how the movies are specifically designed for the viewers, despite being mostly males, to put themselves in the woman’s shoes.

My favorite chapter is the one that favorably compares I Spit On Your Grave to the Jodie Foster movie The Accused, which Clover considers to be sort of the mainstream adaptation of the earlier film. She argues that maybe achieving justice through the unorthodox use of a rare legal loophole (as Foster’s character does) is not all that much better then chopping the motherfucker’s face off with a boat motor. I’m not really doing it justice, but it’s a very smart defense of a movie many would consider indefensible. (I think it has since been topped by Joe Bob Briggs’s commentary track on the DVD, though.)

So why the hell were they talking about Men Women and Chain Saws on the radio? Is somebody from 24 or Lost doing a remake of I Spit On Your Grave? No, that’s not gonna get film theory on the news. It turns out that asshole who shot those people at Virginia Tech sold a copy of it on ebay. I’ve been trying not to write about him, because I don’t want people like that to achieve their dreams of becoming America’s boogeyman. But I gotta mention this.

Just like with Oldboy, I haven’t seen anybody stupid enough to lay any of the blame on Clover’s book. But I could hear the contempt in Stephanie Miller’s voice as she read out the lurid half of the title, obviously not knowing what it was. I looked up articles that mentioned the book and they take the same approach as with Oldboy: “Now, let’s be cautious. There is no reason to believe for sure that this book had anything to do with the murders.”

But why does this even have to mentioned? Of course it fuckin didn’t. It’s a film theory book, which he was assigned to read for a class. I doubt he even finished it. She lays it on a little thick with some of this “one sex theory” and phalluses and what not. Even I had to skip past some of the discussion of The Exorcist vs. Witchboard. And by the way, Clover points out that one weapon almost never used in horror movies, either by their villains or their heroes, is guns.

But if there’s gonna be a comeback let’s hope it’s from Tarantino’s title-dropping and not from morbid curiosity.

In case you’re wondering, I didn’t buy that asshole’s book. He was selling a used copy for two bucks over the list price. I’m not that much of a sucker.

books slashers
This entry was posted on Tuesday, April 24th, 2007 at 4:00 pm and is filed under Other Sites, Vern Tells It Like It Is. You can follow any responses to this entry through the RSS 2.0 feed. You can leave a response, or trackback from your own site.

One Response to “Book Review: Men, Women, and Chain Saws: Gender in the Modern Horror Film”