The Sword of Doom 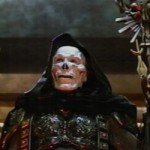 When the Criterion company puts out a DVD, and the title doesn’t rhyme with either THE SCHROCK or SCHMARMAGEDDON, you know it’s probaly a pretty good movie. And everybody loves a good samurai picture so I’ve had my eye on this THE SWORD OF DOOM for a while now. What finally inspired me to watch it though is the ballots for the revision of the Badass 100. It hasn’t been rated as many times as alot of the other movies, but so far every single person who’s rated it has given it a perfect 10. It seems like they like it.

Sure enough, this is a good one. It’s basically the story of a crazy fuckin bastard goin around killing people for no reason in samurai times. The guy’s name is Ryunosuke and he’s played by Tatsuya Nakadai, who I guess is in some of Kurosawa’s pictures. The Japanese title actually means “Dai-bosatsu Pass” which is the location of the opening scene where we first meet this psychotic fuck. And right away you get this feeling that something horrible is gonna happen because the opening title says something like “Spring 1860, the Dai-bosatsu Pass Incident.” Like what’s about to happen is some horrible notorious thing we’ve all heard about before. Gulp.

An old man and his grand daughter have climbed 15 miles up this mountain for a pilgrimage and they’ve stopped at a Buddhist shrine. Suddenly this asshole in a shinobi hat, Ryunosuke, approaches the old man. He asks him a couple questions and then slices him up. His eyes look crazy but he doesn’t seem too worked up about the whole thing. And it’s kind of ambiguous because, to be fair, the old man was actually praying for Buddha to let him die and come to “the other side.” So you’re not really sure if Ryunosuke is trying to do him a favor or what. Anyway, he just walks away. You know how those fuckin shinobis are. They think just because they have giant hats they can go around fileting people. Fuckers.

Next we find out that Ryunosuke has a sword fight coming up tomorrow, and for complicated reasons to protect the family, his dying father begs him to throw the match. Next, his opponent’s wife comes to him and also begs him to throw the match, because if her husband loses it will destroy their whole family. Ryunosuke tells her that a sword fighter’s skills are like “a woman’s chastity” and asking him to throw a match is like asking her to give up her chastity. If you know what I mean. Nudge nudge. You get me? You get what I’m saying lady? This give you any ideas what it would take to make me throw the match?

So basically he coerces/rapes the poor gal (offscreen, thankfully) which brings up the hypocritical stance I will always believe in: that it’s okay to kill people in movies, just not to molest them. So at this point I’m definitely rooting against Ryunosuke. And then he goes ahead and wins the match anyway, killing the guy, takes the wife as his own, has a baby with her that he ignores, and treats her like shit.

Nakadai is real good at making this guy scary. He has an alien look in his eyes like he’s disconnected from what he’s doing. When he goes home he just kind of sits there and stares into nothingness. In some parts he just starts laughing for no reason. You could maybe compare him to a Travis Bickle or somebody. One guy on the IMDB compared the movie to HENRY: PORTRAIT OF A SERIAL KILLER.

But there is a samurai you could compare him to. I think Ryunosuke is kind of a pre-Lone Wolf and Cub. Ogami Itto considers himself a demon, and he kills alot of people, but we root for him because 1) he started this demon quest after being totally fucked over and 2) he follows a code of honor where the people he’s killing are usually assholes. Ryunosuke, depending on how you interpret this all, could be more of a literal demon samurai. Or he could just be nuts. The American title “Sword of Doom” seems to imply that the sword he uses is cursed, and this theory is supported by no less an authority than Toshiro Mifune, who plays a wise swordfighting teacher that Ryunosuke fucks with. Mifune says “The sword is the soul. Study the soul to know the sword. Evil mind, evil sword.” And based on what I’ve observed about Ryunosuke that means his sword is REAL GOD DAMN EVIL.

This is a 2 hour movie and it’s right about the one hour mark when we find out that even Ryunosuke’s own father notices he’s fucked in the head, and he personally sends the brother of the guy killed in the duel at the beginning to the best teacher (Mifune, of course) to train to kill Ryunosuke. So at that point the movie begins to switch over so instead of following the crazy psychopath we follow the good guys who are gonna try to do something about this. But the movie doesn’t exactly pan out the way you expect it to.

I’m gonna go ahead and spoil the ending so you should stop reading now. Did you stop reading? Good. At the end Ryunosuke really hits rock bottom. There’s an amazing scene where he seems to be haunted by the ghosts of the people he’s killed, represented by shadows on the rice paper walls. And he pulls out his sword of doom and starts fighting with thin air. He goes completely crazy, savagely cutting through all the walls until he discovers that he’s surrounded by the clan of assassins he’s been hanging out with, who have turned on him. And he takes them all on. This scene I’m sure is a big part of those badass ratings of 10 out 10, because it lasts for 7 minutes and according to wikipedia he kills 70 samurai in the scene. But to me the best part is that he’s in a total frenzy and he’s just spinning around swinging his sword and then it freezes and that’s the end. To me this freeze frame seems to be saying “You get the idea.” We’ve seen him killing 70 guys and this is going to continue forever. For all we know that bastard is still fighting that battle somewhere.

Here’s the thing. The movie is based on a serialized novel. The movie was supposed to be a trilogy, so we would find out more about what happened in the next movie, but the next movie was never made. In fact, the story was made into at least 3 other movies and none of them had a sequel either. And apparently the author of the novel died before the story came to a conclusion. So as far as I’m concerned the universe means for the story to end the way it does in SWORD OF DOOM, with a crazy fucking massacre that will never end.

I don’t know how much of it is intentional but this movie, while being enjoyably violent, is a good portrait of what violence is all about. We don’t know why this guy is killing people. We don’t know if he’s crazy, or if he’s possessed by an evil sword. Samurai don’t kill people, swords kill people. If it really is a sword of doom, we don’t know how long he’s had this sword, and how long it’s had a hold of him. Is the incident on the pass the beginning of the killing spree? Or did we come in late? Maybe he’s been pulling these sword of doom shenanigans for years. The thing is it doesn’t really matter. As far as we know the killing spree has always been going on and always will be. We gotta stop fighting, people, and scrap that fucking sword of doom.

samurai
This entry was posted on Tuesday, June 6th, 2006 at 11:30 pm and is filed under Action, Reviews. You can follow any responses to this entry through the RSS 2.0 feed. You can skip to the end and leave a response. Pinging is currently not allowed.

One Response to “The Sword of Doom”