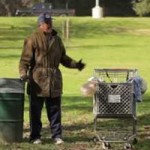 The movie starts out with a guy jumping off a building. Tommy Lee is at the funeral and shortly after receives a letter, and a key, from his dead ‘Nam buddy. In the letter the dead guy explains that he’s been preparing an attack on Central Park for a long time. The key leads to a ridiculous stash of guns, bullets and bombs. There are also maps showing where this guy has already planted explosives around the park. 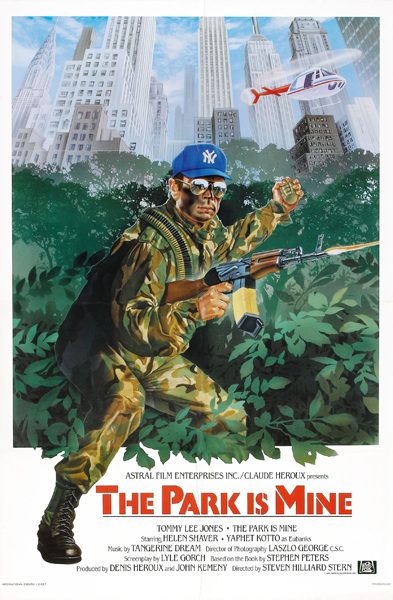 I’m not really sure why the guy had to kill himself before pulling his little massacre. But Tommy Lee, having lost his shitty job and not being allowed to see his kid is pretty much in the mood. His ex-wife chews him out for being a fuckup and asks him “Why don’t you just do something about it?” Cut to Tommy Lee in full camo, plus face paint and Yankees cap, ready to conquer Central Park. It’s 3 days until Veteran’s Day and his only demand is to keep people out of the park until Veteran’s Day.

The story is set up incompetently (why do we need a voiceover of the letter explaining everything when we could discover everything visually, piece by piece?) but I love this idea. Most people would think “Holy shit, my friend was completely nuts, but should I tell the cops or just try to get rid of this shit?” Tommy Lee happens to be the one guy who would take all the weapons and finish what his friend started. That’s a good premise for a movie right there.

Once he takes over the park (which he does just by making a phone call and detonating a couple bombs) the rest of the movie of course has the police trying to foil him and him trying to “make his point” about the treatment of veterans. Yaphet Kotto plays the wise and sympathetic police captain. A Yaphet vs. Tommy Lee showdown could be pretty good but unfortunately the antagonist is a weasely Jeffrey Combs looking motherfucker who is the deputy mayor. He just wants to have Tommy Lee killed and he’s played too broadly to be taken seriously.

Also not surprisingly you got a female journalist who sneaks into the park to try to get a good story. Tommy Lee is worried she could get shot or step on a mine or booby trap so he keeps her around. You know how movies are, it’s dumb when somebody talks to themself too much, but nobody wants to go non-verbal. So you get these characters who exist only so that the main character has somebody to talk to. Anyway she tries to make a documentary about him. I don’t think she really knows what she’s doing, I wonder if she is into the Maysles Brothers and stuff like that? Also she is shown sucking her thumb while asleep which I thought was an interesting touch. Not sure what that was about. Nothing against thumbsuckers, you just don’t see that in too many movies in my opinion.

Also there’s a funny part where the ex-wife calls into the park on the emergency phones and gets jealous because a woman answers.

I think this could be remade into a great movie, but this ain’t it. The action is cheesy (lots of explosions and bullets that never hit anyone) and come to think of it I’m not sure I would even classify it as action. There is nothing exciting or badass about any of the violence in this movie. The very worst part though is the way they try to make him into a folk hero. There’s a scene where people on the street are interviewed and they talk about how he’s “a regular guy like us” and they admire him for standing up, but of course they don’t say what exactly he’s standing up for. Come on man, you gotta work a little harder than that. You gotta make us like him, you can’t just tell us that the hard working, straight talking working class New Yorkers like him. You’re trying to force it. I guess it was okay when they showed a veteran’s group wearing “THE PARK IS MINE” t-shirts during the Veteran’s Day parade. At least that was kind of ambiguous.

The one thing the movie really has going for it besides the premise is Tommy Lee, who obviously is great at barking out orders. It’s funny to see him interogating innocent parkgoers asking them “What are you doing here?” I’m not sure why this only happens once or twice though. I thought New York was a pretty big city with lots of people in it but I could be wrong about that, I’ll have to look it up.

At the end the deputy mayor sends in two mercenaries, a Trautman looking dude who’s “an idol to Soldier of Fortune types” and, believe it or not, a guy from the Viet Cong. That’s pretty insulting to Tommy Lee, of course, but he manages to take care of them. I kind of wonder though what happens after the movie is over. I bet “Soldier of Fortune types” would be pretty pissed that he killed their idol.

I should warn you that the music is by Tangerine Dream. I don’t know why a guy would call himself Tangerine Dream, so I’m guessing it’s a band. But it sounds like one guy playing a keyboard so I wonder what the band does. Maybe one guy does the black keys and the other guy does the white keys, I don’t know. Anyway, I’m not a fan of Tangerine Dream, or ’80s keyboard scores in general. Only John Carpenter knew how to pull that off. Plus, these guys don’t seem to give a shit what’s going on in the movie. At the very end he has made it to Veteran’s Day and he’s supposed to turn himself in, and all the sudden he just sets off all the bombs and there’s huge fireballs everywhere like he blew himself up. But Tangerine Dream is playing happy victory music. So then it’s not a surprise when he somehow walks out okay. I’m not sure what he blew up exactly or why but I guess it’s happy, according to Tangerine Dream.

The director is Steven Hilliard Stern, who also did MAZES AND MONSTERS (Tom Hanks anti-Dungeons and Dragons tv movie) and ROLLING VENGEANCE (guy goes on monster truck rampage) and this is pretty much on that level. The weird thing is it’s based on a novel by a guy named Stephen Peters, who wrote the late ’90s classic WILD THINGS. The PARK IS MINE book came out in 1982 so it may not be a FIRST BLOOD ripoff, unless it was either a rip off of the book or written and published really fast. Whatever the case is, it’s not FIRST BLOOD. In fact, both movies have a scene where cops shoot at the protagonist from a helicopter and the helicopter blows up, escalating the battle. In FIRST BLOOD the cops die. In THE PARK IS MINE the cops get out and run away safely before the copter explodes into a huge ball of flames. That pretty much sums up the difference between these movies.

crazed veterans Tommy Lee Jones
This entry was posted on Wednesday, January 4th, 2006 at 4:10 am and is filed under Action, Drama, Reviews, Thriller. You can follow any responses to this entry through the RSS 2.0 feed. You can skip to the end and leave a response. Pinging is currently not allowed.

4 Responses to “The Park Is Mine”