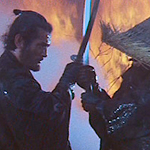 Magobei’s not gonna make the same mistake he made last time. He’s gotta stop this massacre or die trying. So he puts on his cool hat and starts walking. 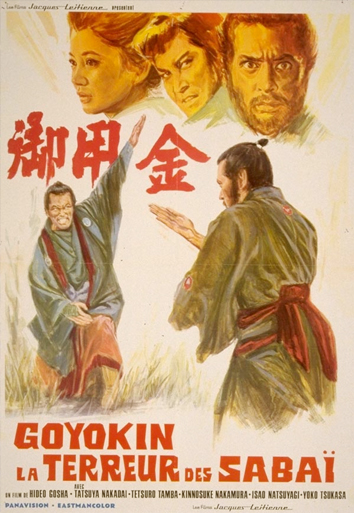 It takes place mostly in rural areas without many people around, but he happens to be walking by when a brother and sister are getting chased by some Yakuza who they cheated in a dice game. I don’t think Magobei cares that much what happens to these brats, but he hears the lady talking shit saying nobody can touch her because she’s cursed, she’s the girl who survived a Kamikakushi. So that piques his interest.

Then there’s this other ronin Samon (Kinnosuke Nakamura), a guy with a cartoonishly dickish face, who starts poking his nose around. He knows Magobei is up to something and thinks there’s money in it. He seems untrustworthy, but when he goes to betray Magobei to Tatewaki we find out he’s actually going as a double agent, fishing for intel.

They figure out what the plan is and when it’s going down, but that just means they have to face an army prepared for a massacre. Magobei does a good job of picking some of them off, then gets trapped in a run down building. He defends it well, stabbing through the windows and the ceiling when guys try to sneak up on him.

This feels more modern than many samurai movies because it’s shot mostly on location and turns into kind of a noisy spectacle. There’s snow, fire, rainstorms, swarms of crows, puddles of blood. But like the best samurai movies the final showdown is very intimate and emotional. There’s a sense of mutual respect and sadness that it had to come to this. But it did have to. Neither of them was gonna back down.

That’s the thing about strict codes of honor, and being as sure of your position as a samurai. Sometimes you get yourself into a Dr. Seuss’ The Zax type of situation.

You know, about 40 minutes into this was when it hit me that oh shit, this is MASTER GUNFIGHTER! That’s a pretty obscure reference I suppose. Tom Laughlin of BILLY JACK fame did this western where he was trying to stop his old friend the wealthy land baron Ron O’Neal from wiping out a Mexican village. I once knew it was a remake of a samurai movie, but had no idea it was this one until I was already watching it.

But it makes sense that the ol’ hippie asskicker and Freedom School co-learner would dig this story. It’ s about having a conscience and standing up to a government abuse of power. It’s about an economic policy that crushes the poor, so the government can keep borrowing. And it has villains who clearly believe their criminal conspiracy is the right and patriotic thing to do. But Magobei knows better, and he knows he has to take a stand. He’s a conscientious objector with a sword.

Hideo Gosha samurai Tatsuya Nakadai Tetsuro Tanba
This entry was posted on Tuesday, March 17th, 2015 at 12:15 pm and is filed under Action, Martial Arts, Reviews. You can follow any responses to this entry through the RSS 2.0 feed. You can skip to the end and leave a response. Pinging is currently not allowed.