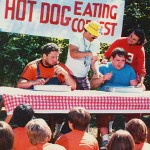 During the cheesy credits sequence (which I thought was a menu animation at first) your mind may slip away to imagine all the modern ways a new SLEEPAWAY CAMP could suck. You can easily picture the bland twentysomething soap opera actors going through the usual DTV horror motions. But you’ll know this is a better kind of suck as soon as you hear the first few lines of dialogue:

“What are you dicks laughin’ at?”

“No Alan. We were just lightin’ farts.”

Moments later Alan (Michael Gibney, not eligible for Oscar because this didn’t get a theatrical release) is disappointed with the fart lighting and threatens the other kids with a hairspray torch, but is stopped by a counselor (some guy who was apparently in Pirates of the Caribbean). Instead of punishing him the counselor complains that that Alan kid is a jerk and is gonna get his some day. The kids are played by actual kids, not your usual college grads, and the counselor looks at least late 30s, but his powerlessness over this Alan made me wonder if he was also supposed to be a kid. This whole movie is about camp kids swearing and attacking each other and counselors not knowing what to do except occasionally swear back at them.

I’m not a liar, so I won’t tell you this movie is scary or, you know, good. And I will mention that it looks cheap and repeatedly fades out from scenes as if going to a commercial. But it is the most remarkable slasher movie I’ve seen in a long time. That’s why I’m remarking about it right now. Seriously, I enjoyed the hell out of this one and I know some of you will too.

I didn’t like recent internet-popular slashers like HATCHET or especially fuckin BEHIND THE MASK. Nice try but they didn’t capture or seem to understand the things I like about the old ’70s and ’80s slasher movies they were paying tribute to. RETURN TO SLEEPAWAY CAMP doesn’t have to capture or understand shit, it just has to BE. I get the feeling Hiltzik didn’t have to think about it, he just made the only movie he knew how to make. He didn’t even fall into that trap of trying to modernize it. I don’t remember seeing any cell phones, iPods or computers. The only way you can tell it’s not the ’80s is the clothes, which if I had to guess I would peg somewhere in the ’90s. And I think there’s a reference to the song “Intergalactic” by the Beastie Boys.

(By the way the movie was filmed in 2003 and has been held up while they finish the CGI, which is weird because I didn’t notice much CGI.)

Anyway my point is that this movie is not retro. It’s an actual early ’80s slasher movie that just happened to be made a couple decades late.

I haven’t seen SLEEPAWAY CAMP in a while, and like anybody the main thing I remember is that last shot, the O.G. Crying Game, the wang of a thousand nightmares. There’s no way to match that in a sequel because even if they managed to come up with something that shocking and bizarre we’d be looking for it. It wouldn’t be the same. But the filmatists did come up with a funny way to bring back Felissa Rose as Angela. I won’t give it away but it’s better than I expected.

The other thing I remember about part 1 is a dude being horribly done in by a beehive on a stick while “taking a wicked dump.” This sequel definitely captures both sides of that – the juvenile crudeness and the mystifyingly ludicrous kills.

The #1 way this movie excels is in the creation of Alan, a character so hilariously unappealing he makes Shelly from FRIDAY THE 13TH 3-D look like Cary Grant. Alan is bigger than the other kids and likes to bully them, but the second they fight back he starts crying and saying everybody picks on him. Then he usually throws something and runs away yelling “Your ass smells!” (his catch phrase). He smells like rotten eggs because a guy threw eggs at him in one part and he never changes his shirt. Eventually he looks like he’s wearing a tie-dye, but it’s really just a record of all the things that have been thrown and shot at him. I’m not clear if he’s supposed to be retarded or pretending to be retarded for sympathy, but he says he’s “different” due to having had rheumatic fever once. Also his step-brother makes fun of him for being covered in frogs:

“Still dickin’ around with the frogs?”
“THEY’RE MY FRIENDS!”

(note: whenever one of these words is said, all the other kids laugh)

While we’re at it here are a few representative lines of dialogue:

“God damn you! You’re all monsters!”

“You corrupted my bird Matilda!”

So the movie’s mostly about foul-mouthed kids being cruel to each other, their counselors standing around not doing anything about it, and then a masked and gloved male and/or female individual starts murdering people who pick on Alan. The effects aren’t real impressive, but the deaths are your usual gimmicky torment familiar to campers – cook goes headfirst into hot grease, guy gets dick pulled off by fishing line tied to Jeep, etc. The late Isaac Hayes works in the kitchen and then they never mention him again – not sure if that means they cut out a death scene or not. Vincent Pastore of the Sopranos, who runs the camp, gets arguably the least plausible death. I understand the cage of rats on his head, but I don’t get why the little bastards chewed cubby holes into his chest. I’m sure there are better places to live around camp Manabe. (it’s a different camp, by the way. Same head counselor though, played by Paul Deangelo in a muscle shirt.)

I think the main lesson you can learn from this movie is to never send your kids to camp. Even before a maniac lights your kid on fire you’re wasting your money. Whatever happened to canoeing and making bracelets and shit? This camp is like a 2 week lunch period, they just sit around eating food and thinking of ways to torment each other.

Supposedly Hiltzik is already in production on SLEEPAWAY CAMP REUNION 3-D, so I look forward to hearing more about that one in about 2013. Until then RETURN TO SLEEPAWAY CAMP is highly recommended to anyone who enjoys this sort of shit.

DTV DTV sequels slashers summer camps
This entry was posted on Tuesday, September 30th, 2008 at 5:04 pm and is filed under AICN, Horror, Reviews. You can follow any responses to this entry through the RSS 2.0 feed. You can skip to the end and leave a response. Pinging is currently not allowed.

2 Responses to “Vern Decides To RETURN TO SLEEPAWAY CAMP!”