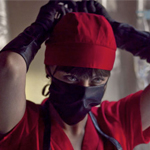 It’s all a big accident. She’s running low on tuition money and too ashamed to let her grandma give her money. Out of desperation she applies for a stripper job. The boss, Billy Barker (Antonio Cupo, A CHRISTMAS TAIL), teases her about bringing a normal resume, amused at her medical background. But when his guys interrupt the interview about something nasty going on in the basement and their usual underworld doctor is unavailable he pays her $5,000 to go down (still in her audition lingerie) and sew up some guy’s slashed neck.

Quick money, but far from easy. She goes home, pukes, cries, sleeps clutching a baseball bat. She wants it to be over but then she’s tracked down by Beatress (Tristan Risk, THE EDITOR, CABARET OF THE DEAD, AMAZON HOT BOX), a stripper at the club who has had surgery to look like Betty Boop. Beatress tempts her with more underground surgery money, but not involving violence this time. Instead it’s a bizarre cosmetic surgery request from Ruby Realgirl (Paula Lindberg, “Icelandic Racer,” SNOW BUDDIES), a rich lady from the extreme body modification community. 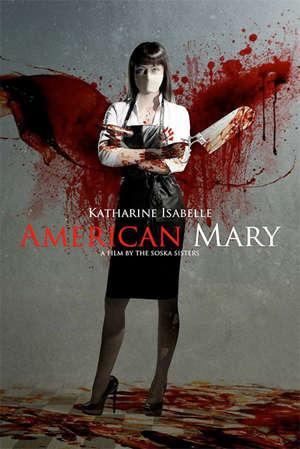 I gotta admit I get a tinge queasy just thinking about it. But writer/directors Jen & Sylvia Soska seem to have a fondness for this world of split tongues, horn implants, voluntary amputations and worse. They cast some real people like that and others with good enough makeup that I bought it. On the making-of featurette a consultant complains about the angle of a guy hanging from skin hooks, comparing it to his own experience.

(One time I was getting a tour of a new job and the boss of the guy giving me the tour stopped him to tell him she was going to be hung from hooks like this. That was the first time I’d heard of it.)

There’s obviously a part of Mary that’s into it, unless the Soska’s fondness for AUDITION is the only reason she chooses to dress fetishistically in black latex apron and gloves (plus high heels) during surgery. Then again, the twin directors seem to feel a duty to showcase Isabelle’s smokin-hotness by having her do a (clothed) stripper dance in Billy’s fantasies. I don’t think there’s a male gaze to this movie, but there’s two female ones.

Anyway, Mary shows pride in her work. She scoffs at clients whose desires aren’t extreme enough. But it starts as revenge. She gets an invite to an exclusive doctor party where I thought it was being revealed that the tough professor who’s been pushing her hard (David Lovgren, “Swiss Captain,” COOL RUNNINGS) is actually part of the elite body modification underground. Nope! SPOILER and trigger warning – he drugs and rapes her, so she gets the Bourbon-a-Go-Go bouncers to kidnap him and tells him she’s going to practice every body modification she’s ever heard of on him, take photos and use him as her portfolio. Within a couple of scenes she goes through an entire I SPIT ON YOUR GRAVE arc and then makes a business out of it.

She dives in heard first, taking meetings in the club, using the bouncers as bodyguards, hiding an operating room in her fancy new loft, fulfilling the most dangerous of requests.

Part of the approach is to gleefully try to shock us, make us peek under rocks and see if we recoil. The Soskas (whose previous movie was called DEAD HOOKER IN A TRUNK, after all) even cast themselves as fanged body-mod VIPs who want Mary to cut off their left arms and switch them. But I enjoyed it more in the spirit of a crime tale with alot of swerves and weird encounters and no guarantee of landing on the right side of morality.

And I think my favorite scene is about a pep talk, believe it or not. After Mary is found out and has to kill someone to cover her tracks, bodyguard Lance (Twan Holliday, THE DEVIL’S GROUND, STAN HELSING), a big heavy metal lookin dude who we’ve barely heard speak up to this point, shares a bunch of fast food with her and tells her a personal story about a tragedy to explain why she should never “devalue” her talent for torturing bad people. I don’t agree and yet I’m kind of moved by his gesture of support.

By the way, I swear they called her professor Dr. Alan Grant, but he sure doesn’t act like the one from JURASSIC PARK. At least the movie – I don’t know what he gets into in the book.

I don’t understand why it’s called AMERICAN MARY. It seems to take place in Vancouver (where it’s filmed), Isabelle is Canadian and her character is never indicated to be otherwise. A 2013 article in Fangoria (#324) claims the title “speaks to something larger than just a tale of outcasts,” and quotes Sylvia Soska about Vancouver being close to the border and “American culture is always on TV; it’s almost like we’re more obsessed with that than with our own culture.”

I don’t know what that has to do with this movie specifically. She doesn’t even seem to be interested in Billy’s plan to go to L.A. And I definitely don’t see any commentary on the American health care system vs. the Canadian one.

The Soskas’ characters give her the nickname Bloody Mary. Maybe that was supposed to be the title, then they realized how generic it would be, panicked and changed it to the first word they could think of. Or maybe it’s just supposed to sound important, like AMERICAN GRAFFITI, AMERICAN PSYCHO or AMERICAN GIGOLO. 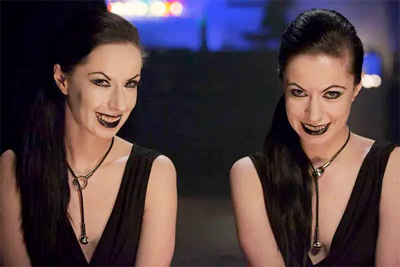 As Canadian horror directors – and as twins! – the Soskas always find themselves in the shadow of David Cronenberg. He’s the only Canadian horror director (or even Canadian director!) many people know, and people always talk about his “body horror,” and they did a type of body horror, so of course they always gotta be asked about him or have their movies compared to his. I think it’s interesting that he actually tried to do a movie about extreme surgery/body modification that never got off the ground. Around 2005 he wrote PAINKILLERS, which was supposed to feature and be inspired by a treatise by ORLAN, whose websight describes her as “a contemporary French artist known for the radical act of changing her appearance with plastic surgery in the name of art.” Nicolas Cage was to play “Saul Tenser, an artist with a high pain threshold who is approached to capture a subversive group” (according to Variety). Screen Daily said it took place “in an anaesthetised society where pain is the new forbidden pleasure and surgery, which is performed in public and on camera, has come to be regarded as the new sex.” So, pretty different from AMERICAN MARY. More CRASHy, from the sounds of it.

The twins started out trying to be actresses, and their first credit on IMDb is as extras in JOSIE AND THE PUSSYCATS (I failed to find them when I reviewed it, but I did spot Isabelle, who they apparently met on set). After appearing in a few shorts and an episode of Kyle XY they decided to go to film school, and starred in their $2,500 final project DEAD HOOKER IN THE TRUNK – so this is kind of their first real movie. I think it’s original and well made enough that it should’ve launched them into the new horror elite, but aside from a segment in ABCs OF DEATH 2 (“T is for Torture Porn”), only WWE Films came calling. So they directed the Dean Cain action movie VENDETTA (which I thought was okay – I’ll have to watch it again and review it) and the slasher movie SEE NO EVIL 2 (which I enjoyed more, and it has Isabelle in it).

But they have what sounds like a loose remake of Cronenberg’s RABID coming out this year, and that seems like some good, gooey material for them to mess around with. Maybe that’ll get things rolling again.

Antonio Cupo body modification Canadian David Lovgren Katharine Isabelle Paula Lindberg Soska Sisters Tristan Risk Twan Holliday
This entry was posted on Thursday, November 21st, 2019 at 11:30 am and is filed under Crime, Horror, Reviews. You can follow any responses to this entry through the RSS 2.0 feed. You can skip to the end and leave a response. Pinging is currently not allowed.