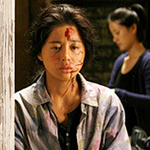 It’s definitely a morality tale. Hae-won (Ji Sung-won, EMPIRE OF LUST) is a young bank worker in Seoul. At the beginning she coldly refuses to loan to a woman who’s about to lose her home. It reminded me of DRAG ME TO HELL, but she doesn’t get cursed for it, and she’s not doing it under professional pressure. In fact when she steps out her co-worker takes over and does help the woman. So it establishes her lack of compassion.

She really doesn’t like to get involved. We know that from her other piece of business that day – having witnessed an assault, she refuses to identify the culprits to the police, even after they threaten her in the parking lot as she leaves the precinct.

But after losing her shit at work her boss makes her take a vacation, and she decides to finally answer another plea she’s been ignoring, to visit her childhood friend Bok-nam (Seo Yung-hee, THE CHASER) on Mu-do, where her late grandpa lived.

The class differences are double and triple underlined. Hae-won looks so different from everybody on Mu-do. They marvel at how white her skin is. She wears dresses that seem inappropriate for the surroundings. Everyone’s always digging up potatoes and shit. They complain about her sleeping in late. When she offers to help with something Bok-nam says, “With those hands?” and she relents. 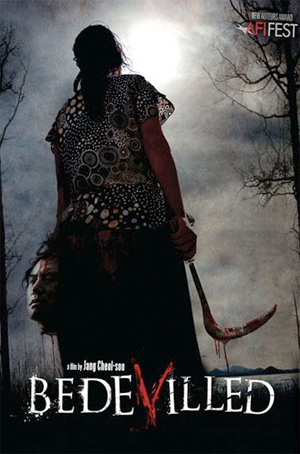 It’s not just TEXAS CHAIN SAW style tourist/outsider tension. Bok-nam seems to somewhat idolize Hae-won. She talks about Seoul and “Seoul girls” as some faraway aspirational dream. They’re independent there. But prettier. And they don’t put up with shit. It’s a little uncomfortable how worshipful Bok-nam is of Hae-won, but mostly it’s sweet, because she cooks her food, checks on her and makes her feel welcome while everybody else is kind of a dick to her.

Especially Bok-nam’s husband Man-jong (Park Jeong-hak, SECTOR 7) and his jackass brother (Bae Seong-woo, THE GREAT BATTLE). It’s immediately clear that things aren’t right here. We see, but Hae-won doesn’t, that Bok-nam’s brother-in-law rapes her, I think with the knowledge of her husband, who does not have sex with her, ridicules her about it, and makes her sit outside on the porch while he has sex with a prostitute. That part Hae-won does discover, and she can’t fathom how Bok-nam puts up with it. But she doesn’t know what else to do.

The prostitute (Chae Shi Hyun) is actually an interesting character in her own right. Like Hae-won she has to come in on a boat from Seoul. Bok-nam has a conversation with her as she has a cigarette on the porch. She tells Bok-nam she should move away. They kind of become friends! But Bok-nam’s innocent young daughter sees her light skin, makeup, short skirt and high heels and intuits that this is a way to attract men, and wants to be like that. In such a dysfunctional household that has implications that worry her mom.

Everyone and everything in this movie seems just right, but the character of Bok-nam as portrayed by Yeong-hie is a stunner. Hae-won is your point-of-view character, and despite her many flaws I find her sympathetic because we share her outsider eyes, and because we assume she’s going to learn a lesson from all this. But Bok-nam is the heart of the movie. She’s so generous and giving of herself, including to her guest and daughter who actually deserve it. We see her go through so much and still try to be a nice person, and keep a sense of humor. It’s sad how transparently she yearns to be saved by Hae-won, who fails to respond. She knows the answer is to start a new life in the city, but she doesn’t believe in her ability to do it on her own. She’s not a Seoul girl.

And of course, the irony is that Hae-won doesn’t live up to this idea of a Seoul girl. When she gets victimized she doesn’t know what to do either.

To me Hae-won becomes more sympathetic as we learn that she’s failed people even more than we ever knew. A later flashback suggests that her fear about helping people is a repeat of a traumatic event from childhood. One that it’s surprising Bok-nam is so forgiving of.

The horror part is… spoiler… when Bok-nam snaps. She can’t take it anymore. It’s so unusual because they’ve done such a great job of building to this comeuppance, and she even goes after them in reverse deserving-it order. First the lady who pretends to be nice but is complicit in everything going on. Then the one who said the shitty thing. Then the ringleader. Then the men. But it’s not cathartic, and it’s not FALLING DOWN style wish fulfillment but we know it’s wrong right guys wink wink. It’s just horrifying and tragic.

Auntie – the old woman who seems to sort of be the matriarch of the island – is also an incredible character and performance. She’s such a despicable bully, an asshole from her very introduction, always trying to make Bok-nam feel bad. But there seems to be a generational thing going on there too, and a probability that she was also victimized by men. She seems like a tough and capable old woman, but she has these strongly held, very backwards opinions about the roles of men and women.

Then, when the shit goes down, her facade crumbles in an instant. She’s dazed, shaking in terror, completely pathetic. And there’s no satisfaction in it. It’s hard to watch. I didn’t blame Hae-won for trying to embrace her. But I did take note that Hae-won only gets up the guts to intervene on something when she’s defending the worst people in the world.

Though this was apparently a big hit and award winner for first time director Jang Cheol-soo, he’s only done two since – SECRETLY, GREATLY (2013) and MURDER AT HONEYMOON HOTEL (2016).

I think I’m having a hard time making BEDEVILLED sound as involving as it actually is. You sort of have to see it for yourself. I hope you will. Thanks to my friend Jeff Williams for recommending it to me.

Bae Seong-woo Jang Cheol-soo Ji Sung-won Korean cinema Park Jeong-hak Seo Yung-hee
This entry was posted on Thursday, October 10th, 2019 at 12:49 pm and is filed under Drama, Horror, Reviews. You can follow any responses to this entry through the RSS 2.0 feed. You can skip to the end and leave a response. Pinging is currently not allowed.