Kris Kristofferson is… THE TRACKER. He’s like Tommy Lee Jones in THE HUNTED, except this is the Old West so it’s probly both a more common skill set and a more useful one. He’s a guy who can glance at some footprints in the dirt and tell you how many people were there, their size, what kind of horses they had, how long ago it was, possibly their political beliefs and religious backgrounds. There’s a part where he points out where a horse is leaning to the right on every fourth step and that means the rider is holding his gun a certain way which means he’s left handed. (Which I don’t think turned out to be important, it was just showing off I guess.) Man, I couldn’t even tell which one was the fourth step, but this guy’s so used to knowing this shit he thinks it’s easy to explain. His name is Noble Adams and he’s famous enough that the guy he’s after is honored and almost star struck when he finds out who’s tracking him. 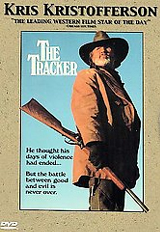 Although Noble is mainly known as The Tracker, let’s not undersell his skills as A Shooter. There’s a real good shot of him knocking a guy off a horse long distance. He carries an old single-shot and when his son asks what happens if he misses he says, “I don’t plan to.” It’s funny how cool it is in movies to not have a contingency plan, as opposed to, say, with the Iraq war in real life. There it’s not quite as endearing.

The people he needs to track are a band of Danites. You know what that is? The killers who did the dirty work for the Mormon Church. I saw a more positive portrayal of them in another made-for-cable western, THE AVENGING ANGEL by Craig Baxley. An unsually dashing Tom Berenger played an honorable Danite tortured by his sins. He was kind of a masochist who sacrificed himself for the Church, which turned out to be corrupt, but he was still a hero. In this movie the Danites are crazy marauders. Their leader, Stillwell (Scott Wilson), is supposedly a Saint, but is clearly a lunatic. He starts the shit by shooting some old men for “cheating” him (i.e. beating him) in a card game, and this turns into a rampage of murder and rape. And he kidnaps a little girl who he implies he wants as his wife (but don’t worry, he’ll wait 3 years for her to grow up).

In case that’s not bad enough for you, motherfucker’s also a racist. He starts spouting some Book of Mormon scripture about God giving the evil people dark skin and if they convert they’ll turn “pale and delightsome.” Even his posse of rapists seem a little offended by this, and tell him “You know that’s bullshit.”

By the way, Patrick Swayze’s brother Don is one of the bad guys. Not sure if anybody was asking but if so yes, Don Swayze is in this.

Noble is settled down with a second wife and his son Tom (Mark Moses) is just back from college. Tom tells his dad that he can’t stay, he’s gonna go back East to practice law. Instead of being sad dad says that every man’s gotta find his own way. They got a couple weeks to spend together first, but then Marshal David Huddleston (title character, THE BIG LEBOWSKI) comes to him with this Danite shit. Long story short, Noble and Tom both go. You know, the old fashioned father-son tracking trip.

There’s alot of cliche here – like a whole thread about Tom having a hard time killing people and it’s supposed to be him becoming a man when he learns how to do it without feeling bad. But the bonding and shit is pretty effective. There’s a fun scene where some bounty hunters see Tom bathing and make fun of the size of his equipment. When they won’t let it go later on he schools them with his college boxing training. Huddleston calls it an “artistic” ass-beating.

Not surprisingly, Kristofferson is the best part of the movie. One nice moment: he’s crouched down in a shooting match with some guys headed his direction, suddenly his horse rears up and falls over dead behind him. He just kind of glances casually over his shoulder and doesn’t miss a beat.

There’s some pretty cool, John Carpentery music by Sylvester Levay (STONE COLD), but the filmatism is mostly TV-slick. From the cover I mistook it for a late ’70s or early ’80s theatrical release, but it’s actually made for HBO in ’88. But you know, I watched it, and I enjoyed it. So it’s both watchable and enjoyable.

THE TRACKER was the last movie by John Guillermin, director of SHAFT IN AFRICA and THE TOWERING INFERNO. It was written by Kevin Jarre, one of the writers of RAMBO: FIRST BLOOD PART II.

Kris Kristofferson TV movies
This entry was posted on Friday, January 8th, 2010 at 3:35 am and is filed under Reviews, Western. You can follow any responses to this entry through the RSS 2.0 feed. You can skip to the end and leave a response. Pinging is currently not allowed.

48 Responses to “The Tracker”