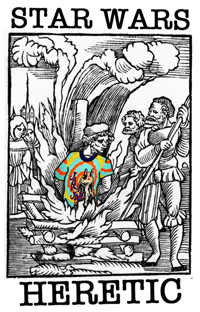 Hear me out, fellas. I’m gonna lay out my argument below, and you can do as thou wilt.

Let me run through certain star-events in each episode that relate to my point here:

Mr. Qui Gonn Jinn is the master to Obi Wan Kenobi, and later to li’l Anakin Skywalker. But he gets killed, his body is burned and Obi Wan takes over as Anakin’s master.

Anakin’s training is a mixed bag, and when he gets into some trouble (murdering Sand People) we hear Qui Gonn’s voice from beyond the grave. He’s yelling “Anakin, noooo!!!” but he’s helpless to stop or help Anakin, or even be heard by him. He’s dead, after all.

Anakin turns evil and abandons the Jedi, sending Obi Wan and Yoda off into hiding. But Yoda tells Obi Wan that Qui Gonn has found a way to talk to them from beyond the grave.

Obi Wan becomes the master to the next generation, represented by Luke Skywalker, to fight what remains of Anakin, now known as Darth Vader. Obi Wan is killed and his body weirdly disappears. During the climax Luke can hear Obi Wan’s voice encouraging him. Somehow he’s taken Qui Gonn’s technique and used it to inspire Luke to do what he needed to do to save the day.

A blue ghost of Obi Wan appears to Luke and advises him. Using the Force this deceased Jedi master can can actually communicate with the living. This is Qui Gonn’s legacy: the sneaky bastard invented the blue ghost!

The blue ghost of Obi Wan appears to Luke again. This is how Jedis operate now. Yoda dies and his body disappears like Obi Wan’s did. Luke manages to get Darth Vader to remember who he once was and redeem himself by killing the Emperor before he dies. Vader’s cyborg body is burned on a pyre like Qui Gonn’s was. Then, in the final moments of the movie, we see the blue ghosts of Obi Wan, Yoda and Anakin watching the victory celebration and smiling.

Like many things involving the Star Warses, this moment is hugely controversial. Originally, when that movie was just RETURN OF THE JEDI, the conclusion of the Star Wars trilogy, the ghost was actor Sebastian Shaw, portraying an Anakin who never existed: a 78 year old non-burnt-up, non-cyborg man in a Jedi robe. But we figured out who it was supposed to be. We let it make sense in our heads. Maybe we figured Anakin was already an old man when he became Darth Vader. We didn’t know.

But by the time the movies came out on blu-ray it was a world where Star Wars was a six episode story, and Anakin was not an old man when he became Vader in part 3, he was young Hayden Christensen. So to make RETURN OF THE JEDI fit as part 6 of the series George Lucas altered that scene so that Christensen was the blue ghost. This drives people crazy because 1. Don’t change a great movie 2. They want to pretend the prequels don’t exist and don’t want to see the guy from them in the new movie 3. Why does Anakin’s ghost get to be young but Obi Wan’s doesn’t.

The first two complaints are legitimate. The original theatrical version of the movie should always be available. But it’s not, and what exists is this altered version that has become part six of a series, and in that context blue Hayden Christensen makes sense. Yeah, I know, Obi Wan looks the age he was when he died, so you think Anakin should look older too and should be a burnt up guy with no arms or legs just floating there. But the fact that he’s not tells us something important: that Anakin has been absolved of his sins. The Jedi Anakin died when he became Darth Vader. When he is redeemed and dies he returns to the form of young, promising Anakin. The real Anakin.

If STAR WARS: THE FORCE AWAKENS ends up being labelled EPISODE VII as expected then it should continue this story, shouldn’t it? And the natural progression of this story requires that at some point the blue ghost of Anakin appear to Luke to advise him. Otherwise, why did Qui Gonn give the Jedi this gift of communication between the living and the dead? Why did Anakin redeem himself and become one with the Force or whatever? After all that they have gone through to get to this point, would Luke really just consider his father dead, forget about him, not communicate with him?

Well, it doesn’t matter what he would do. George Lucas’s Star Wars was about telling a story that he hoped fans would like, I think Disney’s Star Wars will lean more toward giving the fans what they think they want. Hopefully there will be some surprises and some risks taken, but I think they will cater toward the older generation who tend to not like the prequels. They’ll go out of their way to avoid referring to the prequels, even when it’s natural.

J.J. Abrams might put a Yoda ghost in there. He might even make up Ewan McGregor to look like Alec Guinness. But I don’t think he has the balls to put Anakin in there, even though the six previous movies are about him. Even though the story demands it.

Prove me wrong, Mr. Abrams. Or have Pac-Man be the bad guy and say that he ate all the blue ghosts in between trilogies. Nothing else makes sense.

MY APOLOGIES EVERYONE, SOMETHING BETTER TO READ COMING SOON. thanks, Vern

Hayden Christensen Nerd Shit
This entry was posted on Monday, November 24th, 2014 at 3:50 am and is filed under Blog Post (short for weblog). You can follow any responses to this entry through the RSS 2.0 feed. You can skip to the end and leave a response. Pinging is currently not allowed.

492 Responses to “Some nerd shit for you here”