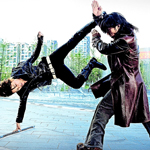 It’s style is not unimpeachable. It has a cheesy transition effect that I think is supposed to remind you of a comic book. I always hate that shit. I guess that’s why reviews like this one on Cinapse call it a superhero movie, but it doesn’t seem to me like super powers as much as just classical martial arts mythology. Our hero Wu-Lin (Song) is the last master of a secret fighting style, the Iron Kick. His feet have stayed encased in metal boots for ten years as part of mastering the technique, so that’s where the Iron comes in.

As a country boy raised in ancient ways, he’s an analog fish out of water on digital land. He journeys into the city and sits in public doing the splits between two suitcases. He’s come to tell his jealous brother (32nd generation Shaolin monk Xing Yu, KUNG FU HUSTLE, IP MAN, KUNG FU KILLER) of their master’s death. Though he disapproves of his brother’s security business he ends up doing a job for him, working as the bodyguard for Fei-Fei (YuFei Li), the bratty daughter of some rich asshole.

Of course she’s annoyed by him. He wears a headband and has long hair so she calls him “Mr. Hero” and tells him “you look like Rambo.” She just wants to do fun heiress stuff, and he’s always hanging around or acting like he’s in a training montage, doing splits or handstand pushups, dipping his nose into a small bowl of water.

Like little John Connor with the Terminator, Fei-Fei starts getting clever about uses for her bodyguard. When she sees a random guy beating his girlfriend on the street she slaps the guy so that “Mr. Hero” will have to fight him. But he gets to do more normal (at least in movie terms) bodyguard stuff when she gets kidnapped by masked men. He chases a van, jumps onto it from an overpass, ducks under a tunnel, hangs on while they swerve around trying to buck him, runs along ledges and roofs to jump back on – Jackie Chan shit. And then he dropkicks through the windshield (a really impressive stunt) and throws all the people out.

So she starts to like him. His heart is figuratively in the right place. Literally, though, it’s in the wrong place. We learn that he’s an “abomination” whose mother died in child birth. His body structure is weird, he was dropped off a cliff by his father when he was a kid, he has to wear the clan’s precious iron boots for ten years, also he knows The Way of the 108 Kicks (as well as the Iron Fist and the Iron Kick). I don’t know if Fei-Fei is impressed by that type of shit though. You know what she is impressed by? The Pierce Brosnan James Bond movies. They never explain it, but she has a little shrine in her place.

They’re probly still on Timothy Dalton back in the village, so Wu-Lin never talks to her about it. It’s just a little visual detail for you to pick up on.

Anyway they hide out at a beach house and there’s a romance type montage where they ride horses and go out on a boat and she teaches him how to drive and they talk by a campfire but I honestly think they’re just friends. 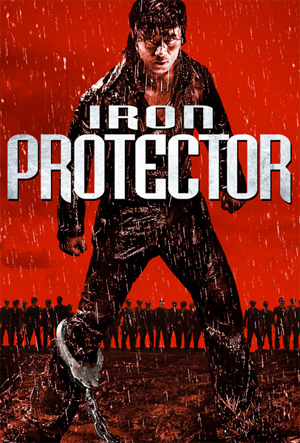 There are many good major and minor bad guys. There’s a gangster who feeds people to his tiger. There’s a pair of fighters, one giant, who demonstrate their skills by having the giant guy lift another one by his ankles and bash his head into concrete, and the other one uses the guy as a kicking bag.

There’s a fight in some industrial place with lots of white dust on the ground. Someone punches and then you see a closeup of the feet of the person who was punched, sliding backwards across the ground. Or you see them flying ten feet in the air and breaking through a wall. Missed punches dent the bricks. Also lots of running up and flipping off of walls.

At one point they put giant cuffs on Wu-Lin’s ankles, wide enough that he can still walk, but he’s not able to use the 108 Kicks. So he starts kneeing them. Not sure they thought that through.

It all comes down to a battle between brothers, so emotions are high. The brother buries Wu-Lin alive and then screams and cries about it. But Wu-Lin claws his way out like Beatrix Kiddo, pays homage to THE SHAWSHANK REDEMPTIO…

…and (for reasons I did not understand) gives himself a makeover to have short hair and wear a nice suit and sunglasses instead of the leather duster and headband. Then he goes to fight the entire all-champion bodyguard company all at once. They’re all crowding around beating him with clubs at the same time but he spin kicks and throws them into each other and he keeps doing this amazing move where he runs sideways on them, going around in a circle. So then they get out the riot shields and try to RED CLIFF him and he runs on those and bends some of them and I’m not saying it’s a better scene, but afterwards when he’s walking away and you see all the incapacitated bodies on the ground it definitely seems like he topped Tony Jaa’s record from that classic bone-breaking scene in THE PROTECTOR.

I always like it when somebody puts a gun away because they want to test their martial arts against their enemy. This has a new spin on the same basic idea where the bad guy is about to shoot him but his brother stops it – by putting his armored hand over the barrel and catching the bullet! At first I thought the brothers were teaming up but no, he had waited all these years to see the 108 Kicks and he wasn’t about to just let him die.

I’ve given lots of good shit away here, but I hope I’ve also demonstrated that there’s lots of good shit to go around. Song also directed and stars in one called THE KING OF THE STREETS from 2012, so I should see that.

Xing Yu Yue Song YuFei Li
This entry was posted on Wednesday, February 27th, 2019 at 10:45 am and is filed under Action, Martial Arts, Reviews. You can follow any responses to this entry through the RSS 2.0 feed. You can skip to the end and leave a response. Pinging is currently not allowed.