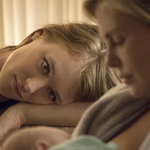 But it’s YOUNG ADULT that made her one of my favorite screenwriters. I gotta proselytize for that movie all the time. It speaks deeply to my darkest thoughts as somebody who left the suburbs, didn’t end up being a regular grown up type person, and alternates between pitying and envying the perfectly fine people who did it the normal way and have kids and houses and cars and money and shit. And it’s one of the very best roles for one of my very favorite actresses, our Furiosa, Charlize Theron.

Also I gotta mention RICKI AND THE FLASH because that one is even more personally meaningful to me even though the character is older than me and has a grown family and well-to-do ex-husband and stuff. Still, Ricki’s sense of fulfillment and family found playing cover songs to small groups of bar patrons – that’s me. I feel that here.

Well, TULLY is Cody’s new one, reunited with Theron and JUNO/YOUNG ADULT director Jason Reitman. This one is about the stress of parenting, so it’s kind of like the middle chapter of a trilogy between YOUNG ADULT and RICKI. This one definitely is more for someone else, it doesn’t link up with my feelings and worries and life experience the way those other two do, but Cody’s usual observant wit, dry humor and relatably flawed characters, plus another knockout performance by Theron, still made me love it. And I’m sure some of you with kids will feel blessed to have it in your life. I’m tempted to say “this will be your SCARFACE,” but that would be an exaggeration. (MR. MOM is your SCARFACE, right?) 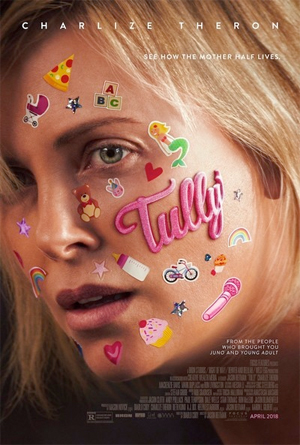 Theron plays Marlo, just before and after giving birth to her third child. She’s on maternity leave but has lots of work to do with her son Jonah (Asher Miles Fallica), who needs special care and throws violent tantrums over things like which parking lot mom parks in or the sound of a flushing toilet, but is termed “quirky” by the expensive private school they go to (thanks to donations from her rich brother Craig [Mark Duplass, ZERO DARK THIRTY]).

There are tensions with her brother and his wife Elyse (Elaine Tan, OUT FOR A KILL). Her husband Drew (Ron Livingston, KING OF THE ANTS) thinks they hate him. Marlo makes fun of Craig’s car and other conspicuous consumption. It leads to more bitterness when he says he wants to pay to hire a night nanny so they can sleep. Marlo takes it as an insult to her mothering skills, and since Elyse recommends it from experience she takes the refusal as an insult of hers.

But then it happens. Tully (Mackenzie Davis, THE MARTIAN, BLADE RUNNER 2049) arrives like some wide-eyed new age Mary Poppins, a young passionate spirit who looks at the baby with awe and dedicates herself to improving Marlo’s life any way she can: cleaning the house, baking, figuring out how to spice up her marriage. Much of the movie takes place at night when Marlo is awake talking to Tully, having fun, absorbing uncynical positivity, remembering what it was like to have her own.

Marlo is another complicated Cody character, though not ever as mean as Mavis, Ricki or even Juno. She does get to yell at people a few times when she’s at the end of her rope, but the difficulty of her parenting responsibilities make it more forgivable. Her human flaws are about admitting sometimes she hates being a mom, that her kids can piss her off, that sometimes she’s too tired to do all the perfect mom shit.

Tully is a perfect embodiment of youthful enthusiasm: comically positive and un-self-conscious, but so effective at her job that it’s more cute than annoying. We can envy her energy, adventurousness and can-do attitude without hating her for it because it’s all such a godsend for at-the-end-of-her-rope Marlo.

Cody is good at making everything a little more nuanced than the formula demands. By all expectations Craig should be kind of the bad guy, at least for a while, but he actually seems like a really cool and caring brother, and the rich-guy stuff the movie kinda teases him for (like building a tiki bar and buying the kids a karaoke machine) are honestly things I would guess Cody might be into. Drew is also kind of a doofus who isn’t picking up on some things he should be doing as a husband, but he also seems to be making a genuine effort and frequently checking in to see if she’s okay.

Elyse is the character who gets the most laughs at her expense, and maybe the uptight sister-in-law is an easy target, but she also seems like a perfectly nice person who is just cut from a different cloth than Marlo (and most of the audience). I absolutely love the joke that JOKE SPOILER before dinner she says “Siri, play hip hop,” especially since Siri makes a good choice, “Electric Relaxation” by A Tribe Called Quest. I don’t think she deserves anything from Midnight Marauders if she can only request it by genre. But they do their best to help Marlo and her family and if you think it would be charming to see Charlize help her shy daughter (Lia Frankland) karaoke “Call Me Maybe” then I have some good new for you. It’s about the movie TULLY. (There is a scene where that happens in the movie TULLY.)

Another great use of popular music is when Tully convinces Marlo to drive into the city with her and they’re listening to “Girls Just Wanna Have Fun” in the car. Pretty on the nose there, huh Reitman? But then there’s a cut and they’re listening to “Time After Time” and then “All Through the Night” or something and basically this is like real life where it takes a long time to drive places and sometimes you can sit and listen to the whole She’s So Unusual album and it’s not just about girls wanting to have fun, there are other considerations here.

The story swerves in a pretty crazy direction that you (or at least I) don’t expect in a drama-comedy like this, and I think some critics are doing the movie a disservice by making a big deal out of it. I liked the choice – it’s unusual and leaves you with some things to puzzle about. I think some people are only looking at the technique and neglecting the meaning, which to me is the more notable part. I’m not saying it’s the same or as good, but it’s kind of like the people who complained about the ending of THE GAME. Sure, you could get rid of it, but then all the sudden you wouldn’t have a movie anymore, or at least not one that’s about what the filmmakers set out to make a movie about.

For me TULLY doesn’t at all top the other Cody-Theron joint, but it’s still very good, and I’ll take as many of them as they’re willing to give us. Reitman can help too if he wants. He’s done well so far.

Charlize Theron Diablo Cody Elaine Tan Jason Reitman Mackenzie Davis Mark Duplass Ron Livingston
This entry was posted on Monday, May 14th, 2018 at 11:13 am and is filed under Drama, Reviews. You can follow any responses to this entry through the RSS 2.0 feed. You can skip to the end and leave a response. Pinging is currently not allowed.