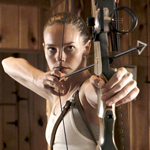 A while back I reviewed a movie called BOOT CAMP that made me think these reform camps would be a good setting for a slasher movie or a DIE HARD ripoff. THE ARCHER is not that, but it’s another straight forward escape thriller set in one of these abominable places in the child abuse corner of prison-for-profit hell. In many cases they’re a scam where parents who don’t know how to understand their kids are convinced to pay money to some ex-military or faux-military psychos to torture them in the name of behavioral re-alignment. In this case she’s considered a good kid, a 4.0 student and state archery champion with no record until she beats the shit out of her friend (and crush)’s abusive boyfriend. Then her naive mom (Dendrie Taylor, SPECIES, SAVING MR. BANKS) is talked into signing away her rights under the theory that it will get her a lighter sentence.

Her name is Lauren (Bailey Noble, True Blood, MARTYRS remake) and she’s more dangerous than she looks. Physically she reminds me of Daisy Ridley in the Star Warses – thin, but with a serious face. She has a tendency to suddenly leap on somebody in anger, and nobody expects that from a girl like her. The movie never gives an explanation for her fighting skills, but there must be a story there, judging from her ability to quickly ground and pound that guy. Anyway, she tries to assert her rights, but nobody will listen, so she takes the law into her own capable hands. 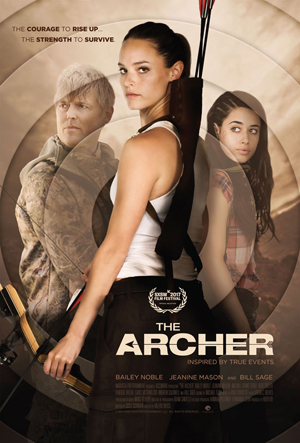 The camp is run by Bob (Bill Sage, the character actor whose villainly really impressed me in WE ARE WHAT WE ARE and  FENDER BENDER), or “Gunnery Sergeant Bob Patrice,” as he introduces himself. He provides mixed messages by welcoming the new inmates with a freshly killed boar hanging from a rope right where they get off the bus, then taking Lauren aside for a friendly pep talk about his past as an archer in the Olympics and using an arrow metaphor to describe his hopes for how the camp can help her improve her life. That doesn’t really seem to be the goal, though from what she witnesses: guards cruelly overworking a girl with asthma, spitting in a girl’s food, watching them shower through peepholes, jerking off like remake Norman Bates.

There’s little time wasted on having to find the strength and inner courage to take a stand. To tell you the truth, this honor student handles things pretty much how Charles Bronson would. She sees a window and she takes it, like she’s got a crop of watermelons to pick. She fights, hikes in the hot sun, carries heavy objects with obvious pain and little complaint. I suppose Bronson wouldn’t have to use sexuality as a weapon. But at least she does it without having to degrade herself – just enough to expose and attack the weakness of men who think with their dicks.  She recruits an accomplice named Rebecca (Jeanine Mason, THE BLING RING [tv version], Grey’s Anatomy), leads and inspires her, they work as a team, all while she struggles with her mostly un-consummated attraction to women. And yeah, don’t worry, she gets to shoot some arrows.

Why are there so many archers in pop culture now? I mean, I think it was just a coincidence that HUNGER GAMES and BRAVE happened. I’m not gonna tell you some Freudian bullshit about women taking away men’s power of penetration, especially after Hawkeye in THE AVENGERS and Arrow on tv and Daryl on The Walking Dead became go-to fictional arrow-shooters. But it works because it was such a neglected cinematic weapon for a while. I was thinking George Romero was on this first with DIARY OF THE DEAD, but then I checked that review and in it I mention THE HOST and RAMBO. Anyway, it’s more interesting than a gun because it’s quieter, it requires more careful aiming, more skill, and more economy because you can’t carry around very many arrows and should probly recycle and it’s more obvious when the filmmakers cheat. I’m not sick of it yet. I’m down. And this movie makes it exciting even without any exploding or smoking arrow tips or anything like that.

They find Bob’s cabin while he’s still at work and have the balls to break in for a shower and supplies. There’s a Goldilocks feeling here, but you’re sure not rooting for the bears. It’s good tension – get the fuck out of there, ladies! I felt like it was a stretch uncharacteristic of the movie when they started making out in the shower, but it’s honestly more character moment than exploitation as Lauren’s one vulnerability is finding someone she can truly trust after her friend chose to side with the abusive boyfriend over her (a heartbreaking and sadly believable turn of events).

But who are we fooling, even if they’d made better showering choices they’d have had some reason to still be in that cabin and have to hide when Bob gets home. He’s a good villain with kind of a Busey-esque menace. It doesn’t take long for the Olympian mask to slide off and reveal his true face, which becomes more desperate and unhinged the more these girls push him.

It’s a humble movie: simple, fast-paced, and over in about 80 minutes. It’s pretty much what you expect, unless you expect it to get boring or do something dumb and fuck up a good thing. A combination of satisfying material and strong lead performances is just what I needed.

By the way, the opening claims to be inspired by true events. I don’t believe there is some former high school archery champ out there who mounted a bloody escape from a camp – they’re really just referring to a true event of judges taking kickbacks to unfairly send kids to a shady operations like this. At the end there is some the-more-you-know text about it, and I will take it as a sincere plea from the filmatists because it is a fucked up thing that needs to end.

The IMDb biography of director Valerie Weiss (which calls this movie “THELMA AND LOUISE meets FIRST BLOOD“) says she has a Ph.D. in X-ray Crystallography (or Biological Chemistry and Molecular Pharmacology, according to the trivia section) from Harvard. She’s directed a couple indie dramas, several tv episodes, and the tv movie AN AMERICAN GIRL STORY: MARYELLEN 1955 – EXTRAORDINARY CHRISTMAS. I don’t think she’s done any movies about crystals yet.

archery Bailey Noble Bill Sage Dendrie Taylor Jeanine Mason reform camp Valerie Weiss
This entry was posted on Thursday, April 5th, 2018 at 1:26 pm and is filed under Action, Reviews, Thriller. You can follow any responses to this entry through the RSS 2.0 feed. You can skip to the end and leave a response. Pinging is currently not allowed.

5 Responses to “The Archer”