And I think he’s only half joking. My recommendation: if you can take a really upsetting horror movie and want to see a good one, stop reading and see it fresh like I did. If you need some convincing or something you can click through. I’ll still try to be vague. 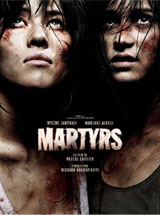 The movie starts with a young girl in her underwear, covered in dirt and blood, her hair messily cut short. She’s running through an alley, screaming, having clearly escaped some kind of horrible situation. And the movie doesn’t really get much more comfortable than that, I’m afraid. So make sure your mother-in-law is not coming over. And don’t watch this if you’re a dude and you have a hot date later in the week, because you won’t be able to get it up for a while.

The girl is Lucie, she’d been chained up in a warehouse somewhere with a little hole to relieve herself through. Now she’s taken into a hospital but is horribly traumatized and doesn’t really talk or remember who did that to her. Also it appears she’s being stalked by some kind of naked, feral woman. We don’t know if this is hallucination, haunting memory or, you know, horror movie stuff. Demons or ghosts or something. And then it skips ahead 15 years and you don’t know – is Lucie gonna be the hero? The monster? Something else? I had no idea.

The subject matter is obviously very disturbing. It purposely reminds you of those puke-inducing news stories you see sometimes about some crazy lady keeping her kids locked up in a basement covered in shit. I read one not long ago about some poor girl who they thought would never learn to talk because of being treated like that during the time her brain was developing. Here’s a movie about a girl who escapes that, and it deals with her nightmares, her suicidal thoughts, her survivor’s guilt, her need for vengeance, her difficulty in re-adjusting and her possible insanity.

But Laugier doesn’t just coast on that unpleasantness. He also messes with you through all the best storytelling tricks. He keeps you uneasy by never letting you get solid footing in the story, you feel like you’re on a wobbly boat. He makes you guess and second-guess who the protagonist is gonna be, who can be trusted, what is reality, what is a misunderstanding or a hallucination. It keeps bringing up situations that imply whole movies that are then left behind when it spins off in another direction. It sets up expectations and then sneaks up and pushes you over the side, like PSYCHO or Brian De Palma at his best, or that one part in DEEP BLUE SEA.

Parts of the movie made me think of HOSTEL and HARD CANDY, but those seem kind of safe and commercial in comparison. This one never allows you to be comfortable. There are no funny lines or happy frat boys trying to get laid scenes. (There is nudity but, in my opinion, not the kind that you like.) It knows exactly what will please the crowd and holds it out in front of you and keeps pulling it away before you can bite at it. Even in the final stretch I was hoping it would go one way and fearing that it wouldn’t. (Come to think of it, I could be a studio executive. I always want every horror movie to end with the victim getting revenge and getting away.)

The direction is high quality, bluntly colliding a realistic world with one you hope to God isn’t real. It can have documentary-like handheld camera in a real suburb, where you hear dogs bark and crows caw in the distance, then seamlessly drag you to some sicko Clive Barker otherworldly shit going on nearby. In fact, I remembered in the middle of the movie that Laugier is the guy that’s supposed to do a remake of HELLRAISER. Now that I’ve seen MARTYRS I’m sold (or I would be if the moron producers of HELLRAISER 4: BLOODLINES weren’t involved). MARTYRS gave me kind of a similar feeling to what I felt when I first saw HELLRAISER. It just seems so much more genuinely twisted than your standard horror movie. It doesn’t seem like it’s trying too hard to shock you. It just unfolds casually like it’s not entirely aware of how shocking it actually is.

I gotta admit, there were times I was delighted by the movie’s willingness to go over the line, and other times I didn’t think I could take much more. If you’re not that into horror, or you’re one of those people who likes one or two critically acclaimed horror movies every couple years and gets offended by most of the other ones, then I absolutely don’t think you should ever see this movie. It will give you a bloody nose. The characters suffer horribly and not only in the usual ways. But it’s not really one of those movies that makes me feel dirty for watching it. It never seems like anything is supposed to be a cool horror gag. The violence is supposed to be horrible and degrading. And the movie is clearly on the side of the degraded. Even when the violence is somewhat justified Laugier forces you to wince at it. It’s definitely in that Peckinpah category of the violent movies that are disgusted by violence.

It’s definitely the best new horror movie I’ve seen in a while. It’s good enough that I just can’t bring myself to ruin it for anybody by saying any more about what it’s about, so this is about as far as I’m gonna be able to go with this review.  Sorry. The end.

French horror Pascal Laugier
This entry was posted on Tuesday, April 28th, 2009 at 1:26 pm and is filed under Horror, Reviews. You can follow any responses to this entry through the RSS 2.0 feed. You can skip to the end and leave a response. Pinging is currently not allowed.