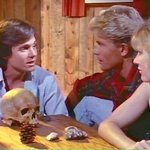 Since SLASHER SEARCH 2017 barely got off the ground, I have decided to break tradition and continue it post-Halloween. I guess the series will go on sporadically either until I’m satisfied that I found a good one or until I get sick of it.

HOLLYWOOD’S NEW BLOOD is copyrighted 1989 (IMDb says 1988) and the cover – a painting of a screaming woman reflected in the lens of a movie camera held by a rotting ghoul – makes it look like it might be a little comedic in a Hollywood satire or maybe even EC Comics RETURN OF THE LIVING DEAD kind of way. Unfortunately that key art is more professional than the movie itself. It’s basically regional horror where the region happens to be Los Angeles.

A small group of acting students go out to a remote cabin for a seminar. (A pretty big nice cabin, not a spooky EVIL DEAD one.) During the course of their stay they learn that the cabin was built on the site of a local tragedy, when a drunk film crew were rigged the wrong house with explosives and blew up the Glouster family. Pretty huge error there that seems almost impossible to have gone through with without someone on the crew or in the house catching on, but hopefully they learned their lesson and were more careful on future productions.

Now of course the students get picked off by the Glousters. IMDb calls them ghosts, but I thought they were supposed to have survived in the woods, Jason style. There are three of these old guys, they dress like homeless people, have a little bit of Halloween burn makeup on their cheeks and walk like zombies. Lots of footage of their gross hands or drooling mouths as they stand in the bushes and spy on women taking naps. They only speak a few times and then it’s one labored word at a time: “They. Found. Mother’s. Bones.”

That happened during a class exercise. The students were supposed to find an object in the woods, bring it back and talk about how it makes them feel or tell a story about it or something. The characters are barely distinguishable except for, I guess it’s Mitch (Joe Balogh, apparently in previous Slasher Search crap MOONSTALKER), the cocky one who has to always make a big deal about expecting a call from his agent. He tries to shock everyone with his find of a piece of a backbone, and then a skull.

When hunky blond ostensible-hero-I-guess Bret Standish (Bobby Johnston, DEMON WIND, PENTHOUSE: THE ART OF MASSAGE, THE JESSE VENTURA STORY) points out that the intact skull is human, not animal, nobody makes fun of him. Yeah, good catch, Bret.

I guess maybe the brothers are trying to get the skull back? At the end the students defeat the last Glouster by bashing him on the head with it. It breaks and sticks over his face and there is much too much footage of him screaming in horror about it. I guess I don’t blame the filmatists for doing that, though, because it’s the only cool-looking thing in the entire movie, even if it makes no sense. The broken piece of skull just happens to fit onto him like a mask, tucked in under his hat and everything.

This is the unfortunate category of slasher movies that seem to be made by people who only have a rough idea of how to make a movie and a misguided notion that it couldn’t be too hard to do a slasher. They have no true understanding of how to construct it, only how to copy the crudest cliches, executing poorly and adding nothing. The characters barely exist, the suspense is weak, there is no atmosphere at all. The woods are always drowned in bright movie lights, canned sound effects implying that they’re full of hyperactive loons or kookaburras or baboons or some shit. Seriously, every time they ever do an establishing shot of the woods (which is many, many times) there’s the same crazy “eeeRRRROOOOKKK! eeerrrRRRROOOKKK! eeeRRROOOKKKKK!” kinda sound. We paid for this library of bird calls and we’re going to get our fucking money’s worth.

At one point it uses the POV-steadicam-through-the-woods technique when the killers are already accounted for in the scene. So who are we supposed to be afraid is watching? It turns out to be the perspective of one of the protagonists, and it doesn’t play like a trick or a subversion of the cinematic language of horror, it just seems like they didn’t think about what a shot like that is supposed to make you feel.

The closest thing to scares is the ol’ “somebody is watching you, oh no they’re coming, oh phew it’s just the boyfriend guy” routine. The men all have that particular fake-scare bad judgment of always getting the women’s attention by suddenly grabbing their shoulder from behind or sneaking up and putting a hand over their mouth. (You know. Like you do sometimes.)

Worst of all, there’s not even any gore. THE AMERICAN SCREAM at least had a fanciful beheading in it. Unfortunately when people are this bad at even doing dialogue scenes usually they don’t know any special effects people. FX take effort and skill. So the murders are just shadows of knives or knives swinging at something off camera. And the struggles are not believable at all. I don’t know why young, healthy Mickey runs in terror from some limping old men or how they manage to tie him to a tree.

It’s funny, they must’ve meant to “write what you know” by doing a movie about aspiring actors from L.A., but there’s something extra painful about amateurish actors portraying an acting class. The teacher is a real one but even he has some pretty rough line readings. Two of the women deliver all of theirs like they’re on a late night commercial for a 976 sex line. What little joy the movie gave me comes from their awkward delivery of ridiculous dialogue. For example the bland, “Let’s have some fun. Marshmallows! Heh heh,” before roasting a marshmallow indoors at the fireplace. It doesn’t have that same “the killer could be right there in the dark behind her” feel you generally aim for in a scene like that, but it still superimposes the face of one of the Glousters over a close-up of the roasting marshmallow.

“Dishes are dry. Why don’t we… get wet?” he says, so very proud of himself.

Also Mitch, because he loves acting so much, has the line “To pee or not to pee, that is the question!”

I was completely taken off guard (and delighted) when the story suddenly concluded at the 67 minute mark. They say something about how the killer is dead, but he’s come back from the dead before, and since you know the rhythm of movies you assume that means that they have to kill him again. Luckily they don’t mean now, but maybe in some delusionally hoped-for sequel, because it goes right into a logo and danceable synth theme song (credited to “Jamos Studios”) that, like the cover, are much more colorful than the movie itself. But this song – and then selections from the score – play for a full 7 minutes over silent footage of innocuous dialogue scenes from earlier! Then the song restarts for the actual credits, which move slower than any I’ve ever seen to add another three or four minutes.

That song is cool, but the score is cheesy as hell, and inspired me to finally research and figure out the name of this cliche keyboard patch used in many cheap ass horror movies of the period. It’s in TROLL 2 and I believe TOXIC AVENGER 2 and it turns out it’s called “Digital Native Dance.”

We may be suckers for analog synth scores in the vein of John Carpenter, but let’s be careful not to allow a comeback for this type of shit. Let the digital natives rest.

Rookie writer-director James Shyman only did one other film, the following year’s SLASH DANCE. In that one the victims are also aspiring actors, but auditioning for a musical. Shyman has a special thanks on the 1999 TV documentary The Unreal Story of Professional Wrestling, so maybe that’s a hint at where he came from, or where he went. I’m not sure.

Digital Native Dance Slasher Search
This entry was posted on Wednesday, November 8th, 2017 at 10:47 am and is filed under Horror, Reviews. You can follow any responses to this entry through the RSS 2.0 feed. You can skip to the end and leave a response. Pinging is currently not allowed.