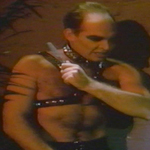 It starts out really strange, though. There’s a dude wearing a suit and a fedora, putting on makeup, thinks he’s Joel Grey or somebody. He goes out to a weirdly stylized street, picks up a hooker, fucks her up against a brick wall, stabs her.

So you think this is gonna be the killer in the furniture store, but then there’s a guy there, doesn’t look like the same guy. This guy has a sleeveless shirt, looks like maybe a mechanic or something, cooks himself a meal in the grimey basement of the building.

The kids come in, and I’m not gonna bother to try to figure out any of the character or actor names. They’re just a bunch of adults pretending to be obnoxious kids, wearing ridiculous clothes and gigantic hair dos, some of them wearing sunglasses even though it’s indoors and most of the lights are out. Of course many slasher movies have one-dimensional characters that are hard to tell apart, but these are the very worst kind: constant sarcastic voices without jokes, giggling, sticking tongues out, pushing each other and high fiving, and jumping out to scare each other, and then complaining about it. Alot of tantrems, screaming “Cut it out you guys!” and “Come ON!” 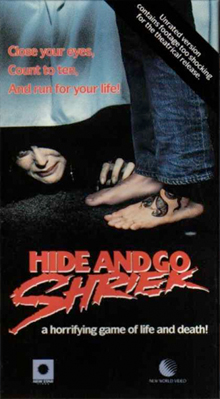 There’s a part where a girl yells “You’re a stupid jerkface!” They save the more harsh language for the killer, who gets “Hey, who are you? What are you doing you slimeball asshole!?”

I guess the idea of coming to a furniture store is that there are beds. The funniest line in the movie is a girl sincerely telling her friend “Listen, you are gonna love making love. You’ll never stop!” There doesn’t end up being much making of love, though. One couple does get a minute to sit in bed topless drinking from champagne flutes. Another couple is in bed, the guy says, “God, I hope they’re careful on that elevator.” Kinda distracted.

It’s not until way later that a girl is on top of the elevator and gets her head popped off. The only memorable gore part. I guess it’s okay one one gets her head bashed into a filled sink, shot from underneath a transparent sink.

I guess the actor playing the killer is named Jeff Levine. No relation to Ted. The interesting thing is that he played the coroner in A NIGHTMARE ON ELM STREET but then a paramedic in part 4 of the same series. I’m sure those Freddy murders are hard on investigators, I wonder if he fucked up or ruffled too many feathers and got demoted.

Anyway in this one he’s not a medical professional (as far as we know), he’s a weirdo furrniture store killer who sometimes wears a dress or sometimes S&M gear. When one of the kids runs into him they just have a fakey fist fight, but then the killer runs at him and stabs him in the belly with a mannequin arm. After that the protagonists decide to carry around mannequin arms and legs to defend themselves.

There are some gay themes that might constitute the only sort of interesting thing in the movie. I think they might be anti-gay, but I’m not sure. Maybe trying to be progressive for the time but not pulling it off. I guess it doesn’t matter, they could still play it on Logo after SLEEPAWAY CAMP.

It starts in one of the first scenes, when two of the characters are lifting weights together. One of them tells the other he’s “gonna expend all your energy” and pats him on the back, then says it’s time for a shower. But they’re not at a gym, they’re in a backyard, it looks like. Then all the sudden the guy is eating a banana! I wasn’t sure if this was supposed to mean they were gay, or if it was a joke accusing jocks of being secretly gay, if it was a FREDDY’S REVENGE situation where one of the filmatists is secretly trying to stick some gay stuff in there but nobody else notices, or if it is just completely unintentional homoeroticism. I still have no idea if it’s any of those options.

But at the end we find out what the deal is with the two different killers. Actually, the guy that was cooking in the basement is not a killer, he’s just a guy who lives in the store who gets mistaken for  a killer. He did time and the other guy, the actual killer, was somebody he punked out. Now that they’re both out the other guy is obsessed with him and trying to be his boyfriend. “I told you it’s over. And now you killed people!” he says.

So at the climax the two guys fight, and the innocent one is dying and he tells his boss, the kid’s dad who owns the store, “I tried to be straight. I’m sorry, Mr. Robbins.” Did he mean he tried to go straight, with a legitimate job? Or did he mean he tried not to fuck guys? I assume it means both. Whether it’s meant as a sympathetic portrait or a “gay people are insane” cautionary tale is harder to decode.

Director Skip Schoolnik was the editor of HALLOWEEN II. He also directed and edited for a ton of TV shows including that Buffy and Angel stuff you guys love.

arguably homophobic Slasher Search slashers
This entry was posted on Monday, October 29th, 2012 at 12:15 pm and is filed under Horror, Reviews. You can follow any responses to this entry through the RSS 2.0 feed. You can skip to the end and leave a response. Pinging is currently not allowed.

16 Responses to “Hide and Go Shriek”