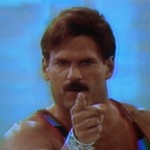 TV movies don’t have to be bad. There is the obvious DUEL precedent, but I’m not gonna hold anything to that standard. A more fair comparison would be the EVIL KNIEVEL movie starring George Hamilton. That one’s pretty cool, and personally I think a wrestler who becomes governor is an even better biographical subject than a dude who jumps motorcycles over canyons.

At the time I thought a wrestler becoming a governor was a poetic gesture. I thought “See that? People have more faith in a professional wrestler than a politician. His job is fake and they believe he is more real than Democrats and Republicans.” But I also had a predisposition to like him because, to be frankly honest, I watched my share of WWF wrestling in the ’80s. I don’t remember Jesse too much as a wrestler, but I always liked him as the bad guy commentator. It was him and Vince McMahon, who was the whitebread goodie-two-shoes commentator who would be outraged by Jesse’s comments. He was like the Alan Colmes of the WWF – the guy who did a poor job of making you root for the good guy point of view. I didn’t know at the time that McMahon owned the WWF, or that he was a huge prick who would later beef up on steroids and become the supervillain of the league. He was just some dork in a tie.

Jesse stuck with me enough that when I named my column “VERN TELL’S IT LIKE IT IS” it was an homage to him. I don’t think I’ve ever admitted that before, but it’s true. I remember him always bragging that he was “just telling it like it is” and like me he was pretty full of shit but also sometimes right.

After his 4 years as governor though I gained a deeper respect for him. He’s real libertarian and always complaining about “big government,” which is not really my thing. But he really does “tell it like it is,” I honestly never heard of another politician who so genuinely did not give a shit about how people would react if he said what he really thought. He’s like BULWORTH without having to squirm at his rapping. So he doesn’t mind openly talking about legalizing drugs and prostitution, for example. Or that interview where he criticized organized religion.

My favorite thing I’ve read about his politics is from when he vetoed a bill that would require the flag salute to be recited in schools. He said:

“I believe patriotism comes from the heart. Patriotism is voluntary. It is a feeling of loyalty and allegiance that is the result of knowledge and belief. A patriot shows their patriotism through their actions, by their choice. No law will make a citizen a patriot”.

And of course Jesse is a (very) proud combat veteran, so don’t be putting that “unpatriotic” bullshit on him. But he hit the nail on the head there. That’s the kind of thing that makes me trust him, because many politicians might agree with him there, but would they think it was worth it to veto the bill? It’s the kind of phony bill politicians on both sides usually pat themselves on the back for. And it’s not gonna really hurt anything if it passes but he stood on principle.

Anyway that’s part of what bugs me about this movie is that their Jesse Ventura, while obviously portrayed in a positive light, doesn’t seem like a smart guy. When he makes speeches in the later part of the movie they’re about two sentences long, simplistic ideas, often ending with him yelling something like “The American Dream still ROCKS!” or “Helmet laws SUCK!”

So it’s pretty cool for a guy like that to get a lead role. He gets to wear lots of crazy outfits, skydive, wrestle, but also have tender scenes with his wife and his parents. Two births and a funeral. He even narrates the movie in an annoyingly cutesy device where he walks in and out of the scenes as Governor Ventura and comments on what’s happening. It’s an obvious “tell, not show” storytelling device but also probaly more lines than he’s gotten to say in all his other movies put together. So I feel proud of him watching it even though I never heard of the guy.

But the poor guy was miscast. He looks the part pretty good but he makes no attempt to talk like Jesse Ventura, and that deep, bitter voice is to me the most important part of Jesse’s persona. Maybe Jesse is a sweetheart with his family like shown in the movie, but you still have to have that brash bad guy personality come through when you’re showing him as a wrestler and a talk radio host. You see this muscleman in a suit with a bald head and mustache, but he opens his mouth and sounds like this gentle dude. It’s just not Jesse Ventura. If you had a guy playing Mr. T he’d talk in a Mr. T voice, he wouldn’t just say “pity the fool” in a Philip Michael Thomas voice.

The movie definitely seems designed for casual channel-flippers with no knowledge of the real guy or of wrestling. You can imagine the writers (who wrote six episodes of “Fame”) knew it was an interesting story but didn’t want to do more than read a brief bio and do a book report on it. You never get the feeling that they did much research or had any interest in the details.

The depiction of the wrestling world doesn’t feel at all believable and has a blatant disregard for historical accuracy. For example the movie opens with a match that’s supposed to be in 1984, but the crowd is clearly from 1999. There are multiple shots of them holding up their signs and t-shirts about Hulk Hogan and the NWO. It’s not even the right wrestling league! All of the wrestlers he faces or is friends with are fictional or from completely different eras. The only exceptions are Jesse’s fellow commentator Gorilla Monsoon and some scenes where a younger Jesse is supposed to be watching “Superstar” Billy Graham.

The depiction of the world of humans is also shoddy. It’s all so much TV movie bullshit crammed together assuming nobody gives a shit. Jesse and his wife make up his new name and entire wrestling persona while on their honeymoon. In the most effective scene about his relationship with his father Jesse’s dad talks to him emotionally about disagreeing with his “cheating is the American way” wrestling line. But then he says “Otherwise I think you did a really good job,” and it’s kind of touching. He turns around and walks out the door and right then Jesse’s wife goes into labor. They talk about calling her mom and do not address the fact that Jesse’s dad is still crossing the fuckin porch. It makes no sense.

And maybe it’s because they didn’t want to get in trouble over a TV movie, but the TV movieists even brush over or skip some of the more interesting parts of his career. For example there’s a scene where wrestlers worry he’ll get in trouble by talking about unionizing. In real life he was seriously looking into it, but Vince McMahon found out and told him any wrestler who joined a union would be fired. Wrestling is a screwed up life, with so many wrestlers dying young after years of damaging themselves, living on the road, using steroids and painkillers and being ripped off by shady promoters. Ventura’s idea was a good one and having been shut down is an important part of his history. But the movie doesn’t follow up on it.

And his reason for quitting the WWF (well, WCW I guess) is, as far as I can tell, an adaptation of the incident shown in HITMAN HART: WRESTLING WITH SHADOWS where McMahon screwed over Hitman. Even though Jesse had nothing to do with that.

And of course I knew this going in, but since the movie was made before he’d actually governed for 4 years it’s kind of a shitty place to end it. We already know he wins and we’ve seen a million grassroots political campaign underdog stories, so it’s kind of old hat.

The failure of this movie has everything to do with the lack of effort (and WWF cooperation) and nothing to do with the subject. I’m not sure if it would ever be possible while the WWE is still in business, but Jesse Ventura is worthy of a genuine PEOPLE VS. LARRY FLYNT style biopic. Not only is it a great story but it’s a great world to depict on film. I would love to watch a more serious attempt at recreating some of those old school wrestlers and their matches.

wrestling
This entry was posted on Sunday, September 14th, 2008 at 4:40 pm and is filed under Documentary, Reviews. You can follow any responses to this entry through the RSS 2.0 feed. You can skip to the end and leave a response. Pinging is currently not allowed.

2 Responses to “The Jesse Ventura Story”