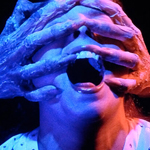 It is my position, though, that INFERNO has a more involving mystery than SUSPIRIA, and even higher peaks of surrealism and violence. I’m not here to argue that it’s better, but just to encourage you to see it if you haven’t, and confer with you about it if you have. 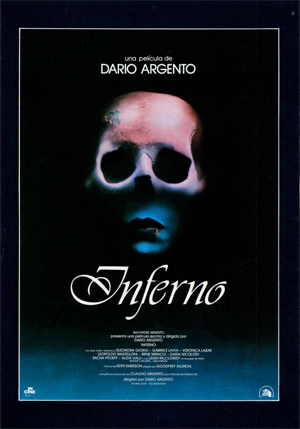 This viewing was the first time I felt like I totally followed what was going on. Up to a point. Upon analysis it’s sort of a puzzle: a New Yorker named Rose (Irene Miracle, MIDNIGHT EXPRESS, PUPPET MASTER) reads an old leatherbound book by an architect named Varelli. It describes three buildings he designed for three witches, with riddle-like clues about how to locate them. She comes to believe that she is living in one of the buildings, and investigates. She brings other people in: a letter and phone call summon her brother Mark (Leigh McCloskey, Dallas, HAMBURGER: THE MOTION PICTURE, Santa Barbara) from music school in Rome, a fragment of the letter get his friend (Eleonora Giorgi, BEYOND THE DOOR) and her neighbor (Gabriele Lavia, DEEP RED) mixed up in it, and then Mark comes to New York and, unable to find his sister, works with her neighbor Contessa Elise (Daria Nicolodi, co-writer of SUSPIRIA and mother of Asia Argento).

All of these people are plagued by, and in many cases killed by, mysterious forces: a beautiful apparition-like staring woman (Ania Pieroni, THE HOUSE BY THE CEMETERY, TENEBRAE), men with unseen faces and clawed hands, biting cats, an angry alchemist who rampages when he notices in a reflection that Sara is holding a copy of The Three Mothers. (Talk about censorship.)

My favorite weird character is Kazanian (Sacha Pitoeff, LAST YEAR AT MARIENBAD), the antique dealer who sold Rose the book. I’m not saying his customer service is great, and he’s not very friendly to Mark when approached with questions, but he’s not a villain. He provides the information about the Mothers and becomes victimized for it himself, with someone sneaking in and stealing three other copies of the book (which can’t be cheap). He senses an intruder and there’s some suspense about this helpless old man on crutches potentially being attacked, but he only finds a cat from Rose’s building next door, which seems to be an ongoing annoyance to him. He goes over and complains to the owners.

He’s basically a curmudgeonly good guy or neutral party, so it’s a hilariously shocking twist when his fight against cat intrusion escalates to ghastly animal cruelty in one of the most bugnuts scenes I’m aware of existing on film. He captures the cats in a bag and hobbles out to a lake in Central Park, dunking them and poking at the bag with his crutch to make it sink. It’s a long process, and he keeps looking around to make sure he’s not seen, sometimes chuckling mischievously. Meanwhile, real rats are swarming in a nearby culvert, and after he’s succeeded in sinking the bag and walking away victoriously he stumbles and the rats crawl up him and start to eat him and he yells that they’re eating him.

But wait! In the distance there’s a hot dog truck with its light on. The man who runs it is chopping some meat and he perks up, seems to hear the screaming. He sees Kazanian and runs to him–

Oh, but then he raises his knife in the air and swings it at Kazanian’s neck, nearly chopping his head off! Who is this hot dog man? Why does he do it? Luckily the movie doesn’t answer.

Did I mention that a lunar eclipse also happens during this scene? It does. And I mean, why not?

(Also IMDb trivia says “a Plexiglass bridge was placed just under the surface of the pond to make it appear that the vendor runs across water guided by supernatural forces,” but I have never noticed this.)

There are at least two other scenes that would be the craziest part of any other movie. One of them is a horrifying cat attack on Elise. It’s mostly implied with sound effects and closeups of cat teeth and claws, but there are some shots of actual cats flying onto her. It’s such a disturbing image because the crew were clearly throwing cats at somebody, and that’s not good for the cats or the person. Anybody who has been around cats can picture how those claws feel even if they’re just trying to land and not attack. All the fur you can see floating around in the sunbeams is an extra-disgusting detail. Anybody would get allergic. 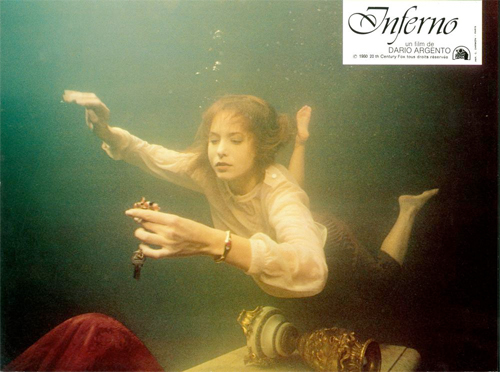 A more ethical and spectacular scene happens when Rose is snooping around the damaged building basement and drops a key into a puddle. In true dream logic she then dives into the puddle and searches for the key in a fully submerged room. A fully submerged Argento room, I should say, with decorations and designs on the carpet and everything. This would be cool enough even if she didn’t get scared off by a rotting corpse that floats at her. Argento uses our senses against us by forcing us to imagine the feeling of our bare feet slipping across the wet head of a bloated corpse. Eww!

There’s something very elemental about the movie. Two of those three knockout scenes I mentioned take place in water. A gust of wind blasts Mark inside a lecture hall. There’s an elaborate catching-on-fire-then-falling-and-smashing-through-glass death, and yes, the movie ends in an inferno. I’m not sure where earth comes in except that Varelli digs into it to create his architecture and foolishly expects to be shielded from it. He describes the building as his body, a sort of mech-suit armor and extension of his sickly physical form. But the hallways he describes as his veins can’t help but be infected by dander-spewing cats, rats, and a trail of ants that lead an unwanted visitor to the brain – to him.

It’s also about the fragility of the human body. A pin on the door handle of a taxi pokes a finger, a cracked doorknob cuts a hand, a broken window guillotines a neck. Kazanian is on the crutches and can be overtaken by rats, Varelli’s is in a wheelchair, needs to plug in a neck vibrator to speak, and nearly strangles himself on the cord. The Contessa is sick and weak, she walks around the building bare foot, seemingly in danger of cutting herself. Only Mark (played by a future soap opera star) is strong and able-bodied, but he’s easily incapacitated with poison. All of them fear yet seek the Mother of Shadows, who literally becomes the spectre of death at the end.

Varelli hides himself in this building, designed with a system of pipes to eavesdrop on all the rooms, to always know what’s coming. Yet he wrote that book, available next door at Kazanian’s, that basically has directions (cryptic though they may be) to his house. Part of him must want to be found.

I could be imagining it, but it seems to me like INFERNO is lighter on dialogue than SUSPIRIA, and has more stretches without it. There’s a line that really made me laugh, though. Sarah asks her neighbor Carlo if he’s heard of “The Three Mothers,” and he says, “You mean those black singers?”

Which reminds me, the actual mothers are not fans of the arts, I don’t think. The nurse (Veronica Lazar, THE BEYOND), who seems to be connected to the witches in some way (SPOILER SHE’S THE FUCKING MATER TENEBRARUM), makes it clear that she doesn’t understand music or poetry and calls artists “strange.” Mark is taken totally aback by it. I guess he doesn’t have to be around many normals at his music school.

In real life McCloskey is and was a painter. He looks like kind of a standard issue hunk guy in the movie, but watch the interview with him on the Blu-Ray. He’s very interested in and thoughtful about the movie and shares 1) a detailed ink drawing he gave to Argento that encapsulates all the themes of the movie and 2) a project he did more recently, a painting that covers an entire room and requires 3D glasses to be “multi-dimensional.” I guess you don’t escape the Inferno without learning something.

Argento tempts us with a sort of science – something in a book, presented matter-of-factly, with rules, by an expert – then give us the opposite. I believe INFERNO is one of the great horror movies of the type that mines our fascination with the unknowable: death, the meaning of dreams, the intentions of animals, the sinister powers we imagine could exist in old books, buildings, symbols, lunar cycles. It takes the form of a treasure hunt that descends into hallucination; a puzzle, a quest, that bleeds into unpredictable madness unchained from our reality. Like an alchemist, Argento has transformed style into substance.

alchemy Ania Pieroni Daria Nicolodi Dario Argento Eleonora Giorgi Gabriele Lavia Irene Miracle Keith Emerson Leigh McCloskey Sacha Pitoeff witches
This entry was posted on Tuesday, October 31st, 2017 at 1:35 pm and is filed under Horror, Reviews. You can follow any responses to this entry through the RSS 2.0 feed. You can skip to the end and leave a response. Pinging is currently not allowed.