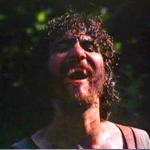 This year during Slasher Search I’m hoping to find a few more woods/camping/cabin based slashers, because I’m working on a novel that relates to this subgenre. So I started with one that actually had the word “woods” as part of the title.

BACKWOODS is a very routine low budget movie about a young couple who go on a camping trip and get into trouble with a feral mountain man type dude. Things do not look promising when the movie goes from the opening credits – with a hillbilly folk tune about racoon hunting creepily whisper-sung over black (you’ll be hearing this song alot) – to a shot of the protagonists riding bikes with cheesy drum machines and music so inappropriately upbeat it sounds like it comes from an old educational film strip. This is a pretty bad movie, but at least it’s not as bad as this music cue had me convinced it would be.

Karen (Christina Noonan, no other credits) and Jamie (Brad Armacost – holy shit, he was on an episode of Empire! I love that show!) are visiting Kentucky. Karen insists on riding their bikes through a mountain trail, then chaining them to a tree and hiking further until they set up a tent and have some sex and what not. Of course this is after a friendly local tells them definitely not to go up in that direction. No specific reason I want to mention but, you know, trust me on this.

The first sign of trouble: they keep finding chicken heads everywhere. Kinda weird. Then it seems like somebody’s watching them have sex. 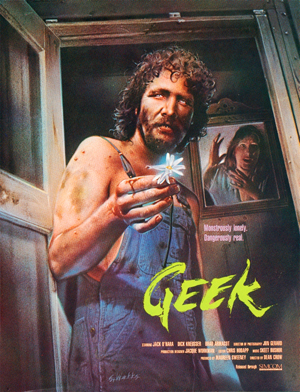 It should be mentioned that they are not teens, and it doesn’t feel like the movie is judging them as sinners. They’re adults in a relationship having fun together. Grown-ups. The dude kinda reminds me of Albert Brooks.

But their couple time comes to an end after a weird encounter with a little girl collapsed in the woods and an older man who points a shotgun at Jamie’s head. He still does his duty as a doctor and does some kind of medical thing to help whatever the little girl’s problem is. Once the girl is okay the man starts talking like a semi-normal person and insists on thanking them by bringing them to his place for dinner.

His name turns out to be Eben (Dick Kreusser, who has two other credits, one as a wino in the same director’s TWICE UNDER), the girl is Beth (Leslie Denise, whose other credit is as an animal handler on TWICE UNDER) and the whole situation is super uncomfortable. Beth doesn’t talk, Eben does, but mostly a few words at a time and not in a very conversational way.

You got some of your class and regional tension going on. Jamie is disgusted by the food, they find little to relate to each other on, there is awkwardness when Jamie makes a joke about the popularity of fruit-shaped magnets. (?) They do kind of bond when Jamie finds mason jars full of moonshine in the house, even though he presumptuously messes with them and is only excited because he says you can sell mason jars to housewives for good money.

Eventually they find out the secret of the chicken heads: Eben also has “a son who’s not right” named William (TWICE UNDER), who he keeps locked up in the old smokehouse, because if he gets out he bites the heads off of all the chickens and the tails off of raccoons and stuff.

But Jamie has sense enough to know they should get the hell out of there, which upsets Karen. She thinks this family, especially Beth, need help, and that it’s their duty to stick around and do what they can. What’s more she accuses him of being sarcastic and uncaring in general. She thinks he needs to learn human empathy.

So he gives it a shot. He goes raccoon hunting with Eben, drinking moonshine and bonding. She stays home and plays with Beth, even peeks into William’s smokehouse to say hi.

Which begs the question: if she’s so empathetic, why doesn’t she seem to have a problem with this guy having his mentally disabled son locked up in a shed? You wouldn’t even do that for a dog. Except Rex in BABE after he bit Fly. But they let him out later.

The horror movie shit goes down when Eben tells Jamie the story of what happened to his wife: William did her in because he liked her hair. Which, it has already been mentioned, Karen’s hair reminds him of.

Oh shit! Jamie runs back to the homestead, correctly guessing that the geek has escaped and is trying to snatch her (spurned on by her changing her t-shirt and him catching a glimpse of boob – he’s got the traditional slasher movie sexual repression). When Jamie arrives wielding Eben’s shotgun William is hanging upside down off the roof like a bat, hissing and drooling and yanking on screaming Karen’s necklace. Once he gets the jewelry he actually backs off, but Jamie (being uncaring) decides to shoot him anyway.

Okay, this is a mess, but what’s worse is Eben seems to have a heart attack and collapse, and when Jamie tries to give him CPR William – still alive – jumps on him and bites his throat out.

I should probly point out that William, though hairy, greasy and dirty (it’s neglectful for his dad not to clean his face off in my opinion), could be a more threatening horror villain. On the movie poster he looks like he could be a big guy. He’s not at all, and for most of the movie he does not use weapons. All he has is his teeth, which is weird because he’s missing at least four of them in the front. I really don’t know how he does all this biting. When he attacks Jamie it’s actually kind of hard to believe that the couple together aren’t able to fend him off and give him a wedgie or something.

For the climax, Karen goes running screaming into the night. Reminds me of the part of TEXAS CHAIN SAW MASSACRE where she’s running in the dark with Leatherface right behind, buzzing the chain saw. Not as good, obviously. The movie is at its most fun when Karen shows heretofore unseen ingenuity in creating a boobytrap. (Spoiler: She finds a tackle box and weaves a complex net out of fishing line with hooks hanging all over it. Then she bashes him on the head with a rock swung from a torn off jersey sleeve and stabs him in the mouth with a flare.)

So let’s look at the moral of the story. Though Karen is clearly the more likable character, the movie is declaring her world view to be wrong. If she’d listened to unfeeling Jamie they would’ve gotten the hell out of there. Beth may or may not have gotten over her medical situation, but she wouldn’t have been shot to death. Lives would’ve been saved, and every character in the story would’ve been better off. In order to survive, she has to neglect her instinct to be kind and empathetic. Before she traps William to kill him there’s a moment where it becomes clear that he’s not trying to attack her, he’s trying to give her a flower. For a moment she feels bad. Then she straightens up and hisses like an animal, so that he’ll understand she’s rejecting the flower and jump at her. She learns to be an asshole.

But there’s also an irony in that the civilized city people are the ones that fuck everything up. Jamie didn’t need to shoot William, and that caused the heart failure of Eben. Karen accidentally shot Beth. She purposely killed William (in self defense). Jamie ends up surviving. William does stab the park ranger (Gary Lott) to death off camera, but that’s the only person he kills. The good guys have a bigger body count by three to one.

I’m not sure how intentional any of that is, but I like it. It’s the most interesting thing about the movie. As savage in the woods movies go this is more competent than some, but not good enough for me to recommend seeking out. 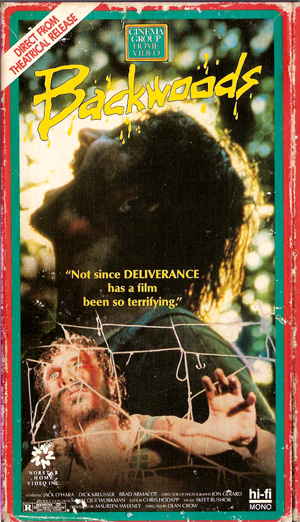 Also note the critical acclaim: “Not since DELIVERANCE has a film been so terrifying.” It promises us a quality film, gets us in mind of a certain type of redneck-attack-in-the-woods movie, is mysteriously unattributed. I guess a critic didn’t say that quote so much as it just, you know, manifested itself. Which is even better than a critic saying it.

Also I dig that the video distributor has the imaginative name “Cinema Group Home Video.” I looked them up, and BACKWOODS was their last hurrah. They did do the VHS releases of a few movies people have heard of though: BLOOD FEAST, DESPERATE LIVING, a dubbed version of POLICE STORY, DEADTIME STORIES, WITCHBOARD.

Writer/director/producer Dean Crow worked out of Indianapolis, which is apparently where this was filmed, not Kentucky. Unlike many directors of regional horror films, Crow actually did two more: one called FATHER’S DAY the next year and the aforementioned TWICE UNDER the year after that. Also unusual: his production company still seems to be in business! The websight is defunct, but the phone and address are listed in many places as if it’s an existing business. One lists it under TV and radio commercials, so I’m guessing that’s what they do most of the time. So if you ever go in there to get them to make an ad for your car lot or whatever, be sure to ask about BACKWOODS!

Brad Armacost Dean Crow Indiana regional horror slashers
This entry was posted on Thursday, October 8th, 2015 at 11:35 am and is filed under Horror, Reviews. You can follow any responses to this entry through the RSS 2.0 feed. You can skip to the end and leave a response. Pinging is currently not allowed.