Then Katherine gets an incredible assignment: working in the office calculating the trajectories and entry points for the first American manned space flights. Okay, I don’t know exactly what that means, to be honest, but it involves filling up chalkboards with a bunch of numbers and letters and lines and shit. Actually, it mostly involves this prick Paul Stafford (Jim Parsons from the fucking Big Bang Theory show) giving her snobby, suspicious looks and tossing giant piles of paper on her desk to go over the calculations that have already been gone over. And with a bunch of shit crossed out because he thinks it’s dangerous for her to know too much.

She has the pressures and fears of anybody thrust into a big, difficult job for the first time, working with people she doesn’t know, not knowing how to fit in, afraid to disappoint the boss, or to make people not like her. But she has the gigantic added pressure of being one of the few women and the first black person in an office during a time when you turn on the TV and see the Freedom Riders being fire bombed. After getting some dirty looks filling her coffee on day 1 she comes in to find a new separate and not equal “colored” coffee pot she has to use. In case you thought your passive-aggressive co-workers were bad. 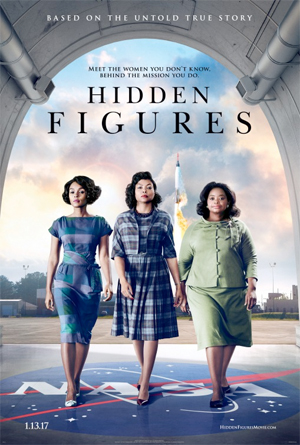 Her biggest problem, though, is going to the bathroom. She’s not allowed to use the white bathrooms, and they didn’t ever plan for black people working in this building, so she has to walk half a mile in pumps every time she has to pee. She doesn’t say anything about it, she just accepts it, and then these assholes complain about her being gone all the time.

Meanwhile, Dorothy tries to get credit for supervising her department while not being paid or titled as a supervisor, and Mary tries to advance to engineering, but first she has to take an extra class that’s required now, and to do that she has to challenge the segregation of the school she’d have to go to take that class. Through all this indignity they usually remain disarmingly polite and seemingly timid, but they repeatedly stand their ground and force traditions and policies and minds to change in the name of what’s right and fair.

Also Katherine falls in love with a National Guardsman (Mahershala Ali, PREDATORS) and Mary disagrees with her husband (Aldis Hodge, MC Ren from STRAIGHT OUTTA COMPTON). Kirsten Dunst gets to be the America’s-sweetheart-actress playing uptight racist, like Bryce Dallas Howard in THE HELP. She’s less cruel than that character but equally in the way of progress. I was hoping after the title cards at the end about the great careers and lives they all had there was one for her that was something like “Vivian Mitchell was laid off two years later, replaced by a racist computer.”

Kevin Costner (CRIMINAL, WATERWORLD, A PERFECT WORLD) brings his gruff warmth to the role of Al Harrison, director of the Space Task Group. And for once he’s playing the less racist guy. As Katherine’s boss he’s kind of clueless about the prejudice and injustice she faces, but when he witnesses it he starts to get it. Big Bang guy will do some bullshit and Katherine will plead her case and he’ll look at both of them and then say come on Big Bang Theory quit fucking around and get her what she needs jesus christ and your show is one of the worst things on television I don’t care if it’s successful you should be ashamed of yourself. He’s a fair guy.

There’s a scene where (EMOTION SPOILER) Katherine finally loses it and does a tearful yelling speech about all the bullshit she has to put up with, and it’s a little over-the-top in my opinion, but it’s worth it for the quiet moment afterwards when everyone’s kind of standing around uncomfortably after she stormed off, and Harrison looks at the coffee pot and then he sheepishly peels off the “COLORED” sticker.

Honestly, alot of us could learn from this character. He’s clearly not as bad as so many racist people of this era. He respects this woman for her mind and has her working with him, must’ve either instigated or supported her being her, when surely others wouldn’t give her a chance. But he doesn’t get defensive or take it personally and get his feelings hurt when someone calls him out on the bullshit that has still been allowed to happen in his presence, the stuff he didn’t really think about before. No, he listens, he thinks about it, he sees what he can do to make it better. He desegregates the bathrooms. He brings her into a meeting and introduces her as an important person. He tries to make things better, and is proud of the idea of NASA being more inclusive than they have to be according to the law or community standards. Striving for excellence.

I’m not surprised this knocked ROGUE ONE out of the #1 slot this weekend. It’s weird, but current events have made this very mainstream, non-threatening rated PG movie more Important than it would’ve been even a year ago. Suddenly it seems more vital to celebrate the contributions of black women in our country, to glorify education and science and progress, to acknowledge and fight against systematic injustices toward minorities and women, to show how people of different backgrounds working together is better for everyone. Shit, even the Cold War part about Americans of different backgrounds uniting around the idea of competing with Russia is dated in a totally different way than it would’ve been last year.

There is this ugly idea some people have of what a “real American” is, and then there’s the one in this movie. What could be more All-American than handsome, charming, hero astronaut John Glenn (Glen Powell, THE EXPENDABLES 3), who goes out of his way to treat these women as respected colleagues, even while the others don’t?

Somebody recommended HIDDEN FIGURES to me by saying it was like THE HELP. And it is kind of that same type of spirit of broad triumph-of-the-underdog, uptight-badddies-get-put-in-their-place, civil rights era period piece, but it’s much more tolerable because it’s entirely from the point-of-view of the black women and has much less self-congratulations for white people. These are great actors playing likable characters shining a light on an interesting part of history, which is different from great filmmaking, but that’s okay. I’m probly an easy mark, but when the entire squad of mousy computer genius women are finally called up to an assignment more worthy of their talents, and they get to walk down the hall toward the camera ready to kick ass like the astronauts in THE RIGHT STUFF, it’s hard not to smile. (Some people applauded.)

Director Theodore Melfi previously did that Melissa McCarthy/Bill Murray movie ST. VINCENT. He was also second unit director for the TV movie MORPHMAN. He wrote the screenplay with Allison Schroeder (MEAN GIRLS 2) based on the book by Margot Lee Shetterly. It’s also worth noting that the soundtrack is very upbeat, a collaboration between Hans Zimmer, Benjamin Wallfisch (one of Zimmer’s minions) and Pharrell Williams, with lots of horns and several retro soul songs with Pharrell doing that fake Curtis Mayfield type voice that he does now.

Aldis Hodge civil rights Janelle Monae Jim Parsons Kevin Costner Kirsten Dunst Mahershala Ali math NASA Octavia Spencer Pharrell Williams racism Taraji P. Henson Theodore Melfi true story
This entry was posted on Tuesday, January 10th, 2017 at 11:26 am and is filed under Drama, Reviews. You can follow any responses to this entry through the RSS 2.0 feed. You can skip to the end and leave a response. Pinging is currently not allowed.