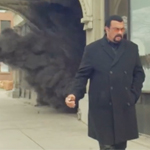 This sniper obsession is a period within his current Goatee Era. These days his characters always look the same, with too much shit on. The goatee, the tinted glasses, a bulky coat, a scarf, a backwards hat, and now he’s big on ear protection like he’s at the gun range.

He opens the movie cutting a cigar and setting up his guns on the tower of a missile silo. Two of the unnamed (but it’s Salt Lake City) city’s gangs, one later described as white supremacists and one “the most vicious, violent gang in the city, responsible for more rapes and murders than your average third world army,” are meeting below for a big coke deal. They eye each other suspiciously and then suddenly their heads start bursting into cgi blood splatters as Seagal takes out virtually all (“over a dozen” according to the news report) of them with his sniper rifle. One of the few survivors tries to drive away in a car, so Seagal pulls out and presses a trigger, and the car blows up. Finally, thankfully, he rappels down (a pretty funny green screen shot) to slash one guy’s throat. There is only one survivor, and he got shot in the arm in such a way that the bone is broken and it kinda hangs loose. 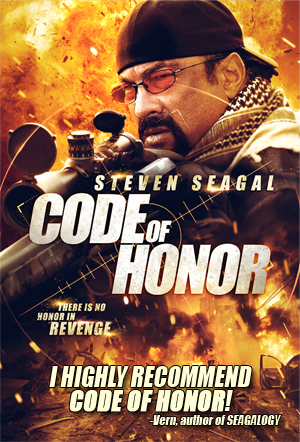 When Detective Peterson (Louis Mandylor, WRONG TURN AT TAHOE, BARE KNUCKLES) investigates the scene the next day (“Drug deal gone wrong?” “Very wrong. They forgot to take the drugs.”) he comes across FBI special agent William Porter (Craig Sheffer, NIGHTBREED, HELLRAISER: INFERNO), who has been following the sniper who did this. Later Porter gives them a number of good “just how badass is he?” lines, and here’s the meat of it:

“His name is Colonel Robert Sikes. He’s a commander of one of Special Forces’ most elite units. His service record is impeccable. His skills of hand-to-hand combat, weapons, firearms, explosives is… it’s unmatched. He’s trained to blend into any city, any terrain, and he’s using those skills and that training to go after gangs or drug dealers or anyone who in his mind is threatening the moral fabric and well-being of this country.”

He also explains that Sikes had a wife and young son killed by accident in a drive-by shooting while he was in Afghanistan. He never found out which gang did it, so he may just go ahead and kill all of the gangs while on his “self-ordered mission to protect the homeland.” He’s pretty close to the Punisher. We can call him the Codeofhonorer.

It’s also pointed out that Sikes doesn’t drink, do drugs or “sleep around.” That’s all fine, but we learn from a stripper character that he doesn’t tip, either. That is not acceptable. Anyway, Porter says they won’t be able to find Sikes because “he’ll already have changed his appearance,” because he’s “trained to be a ghost, a shadow.”

That would be awesome if it cut to Seagal with, like, a bleached blond crew cut, fake mustache and pink tank top. Instead, they cut to him looking exactly the same as earlier in this movie and in his last several movies. To be fair, he later wears a suit and tie, that’s a different look. LIKE A GHOST!

The no-tipping incident happens in the city’s “most notorious strip club,” The Snake Eye Strip Club, which is a phrase you will hear many times throughout the movie. It’s the one that’s next to The Ass Factory, I noticed. Sikes sits there smoking cigars, his face spookily covered in shadows. He’s stalking some mobster guys that hang out there, but he totally looks like a sex killer. It reminded me of an old Sir Mix-a-Lot song called “The (Peek-a-Boo) Game,” from before they caught the Green River Killer. I was gonna embed it but it sounds wrong with the Siouxsie and the Banshees sample replaced.

One of the dancers, Keri (Helena Mattsson, IRON MAN 2), notices Sikes as “the scary guy in the back,” but doesn’t predict that he’s gonna walk out and leave a briefcase bomb. Because he cares, it’s a “precision bombing” that destroys everything but the dressing room, sparing the women. Dubbed “The Super Vigilante” by the media, the Codeofhonorer also kills a pimp and some crack dealers (all white, so it avoids possible racial discomfort) but leaves their hoes and customers alive (sometimes covered in blood). The crackheads that do get killed are two guys hired to guard the remains of the strip club, who get into it with Porter and – since he has a special ops past with Sikes – he pulls out two knives and slashes them up.

Important note: one of the crackheads is wearing a GOONIES t-shirt. It does not survive.

This clever thing about the movie is that as Porter tracks Sikes he keeps getting into it with all the different gangs, some of whom think he’s the one coming after them, and it’s not long before Porter has a higher body count than the guy he’s chasing. Sheffer also does more martial arts in this movie than Seagal, which is ridiculous, but at least when they face off later Seagal keeps doing his trademark knife fighting moves.

I kinda enjoyed Sheffer in this one. He’s playing a guy who’s a mess, and his hair always looks like he just woke up. The first time we see him he’s in a hotel and there’s a photo of a wife and kid on the night table, but he puts a liquor bottle in front of it. There’s a real funny part where he’s asleep in the hotel while a (laughably fake) news report is on the TV, the camera moves in dramatically toward his face and as the Snake Eye Strip Club is mentioned his eyes open wide, like he’s possessed.

When Porter and Sikes sit down together and talk there are some good lines. Mr. Straight Edge, Colonel Sikes, brags about “I never missed a soccer game, I never forgot an anniversary” and chastises Porter because “You fucked everything that moved. Foreign and domestic.”

He tries to justify his super-vigilantism as part of his sworn duty as an officer, and Porter brings up his vow to uphold the Constitution. Here Sikes actually makes a good argument for rebelling against the law:

“Slavery was the law, and if it wasn’t for men like us standing up it might still be.”

Then Seagal’s character generously hands the movie’s best action gimmick to Sheffer’s. He tells him that he’s sitting on a bomb that will go off if he stands up (he says “like we used on that Iraqi general” instead of the more obvious “like the toilet in LETHAL WEAPON 2.”) Sikes leaves just as the mob comes in and starts attacking Porter, so Porter slides the chair around to shoot and stab and snap necks all while still sitting down.

This is also the rare Seagal film that includes a show-offy twist ending. Not as head-scratching as the one in KILL SWITCH, it’s a more traditional one, but still unexpected for Seagal. Except that now I told you to expect it. Sorry.

This is another one from a writer-director, in this case Michael Winnick, who according to IMDb started in Norwegian television in the ’90s and has a couple of features under his belt, sci-fi and horror type stuff I haven’t heard of, and a 2012 crime comedy called GUNS, GIRLS AND GAMBLING that has a big cast including Christian Slater, Powers Boothe, Jeff Fahey and Gary Oldman but also Dane Cook and Chris Kattan. At least this one didn’t have any comic relief characters.

CODE OF HONOR is not a good movie or use of Seagal, but it has enough laughs and weirdness to keep me somewhat entertained, and is kinda different from other Seagal roles. Even in his recent ones where he’s sort of a villain or anti-hero it seems like he really is supposed to be admired for his code of honor. Here, as the poster says, “there is no honor in revenge.” He’s going too far. No one is above the law.

It’s a big step up from the one I reviewed yesterday, at least.

SPECIAL ENDING DISCUSSING SPOILER SECTION: After the movie I actually had a surprisingly long conversation about what exactly the ending is supposed to mean, which I thought might’ve pleased the filmatists. It seems like Sikes actually did exist, since we saw a file for him (was that a touched up photo from OUT FOR JUSTICE? I’m just guessing that because of the beret). I think maybe he really was M.I.A., he never came back. Meanwhile Porter, as they say, screwed around on his wife and drank too much and she left him and took the kid. But in his mind he fantasizes that he’s this awesome guy he knew, Sikes, and that the reason he lost his family is not his fault, but that ol’ chestnut the Random Drive-By Shooting. So instead of trying to make it better by cleaning up his life he can have the more achievable goal of making it better by hiding on top of a missile silo and shooting twelve guys’ heads off. And then pretending/thinking it was another guy that did it and he has to catch him.

But I also got the feeling, I can’t remember exactly why, that maybe it was implying that Sikes really was there somewhere? I don’t know.

For his part, Sheffer doesn’t seem to have the answers. In an interview at Shockya.com, Sheffer says

“Well, I became involved in the film because they sent me the script and offered me the role. I read it and thought it was awesome. I loved that it was such a page-turner, and that I had no idea what was going to happen in the end. Even then, I wasn’t absolutely sure what truly happened. (laughs)”

Craig Sheffer snipers Steven Seagal vigilante
This entry was posted on Tuesday, May 10th, 2016 at 11:35 am and is filed under Action, Reviews, Seagal. You can follow any responses to this entry through the RSS 2.0 feed. You can skip to the end and leave a response. Pinging is currently not allowed.

57 Responses to “Code of Honor”