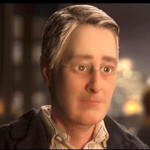 We could compare this to Wes Anderson’s THE FANTASTIC MR. FOX as another unusual stop motion feature that fits naturally into the filmography of its live action auteur. But that one emphasized the hand-made-ness, showing off the imperfections in animating fur, using cotton balls for clouds and puffs of smoke. ANOMALISA miraculously mimics human intimacy in rubber.

I wonder what this says about that “uncanny valley” theory? In computer animation it can be harder to accept more realistic characters than stylized ones, because the closer it gets to the real thing the more you notice that it’s not quite right. Nobody would see this and almost fall for it being live action, so maybe that’s why it works. But they are amazingly life-like – even down to having pores in closeups – without giving me the creeps.

But I think maybe the most incredible thing about it on a technical level is how exactly they can re-create the feel of a hotel room or an airport inside a miniature model. You know you’re looking at a facsimile but you feel like you’re inside a real hotel.

Anyway, I think people will love it. It will become another Hot Topic merchandising juggernaut like NIGHTMARE BEFORE CHRISTMAS I bet. 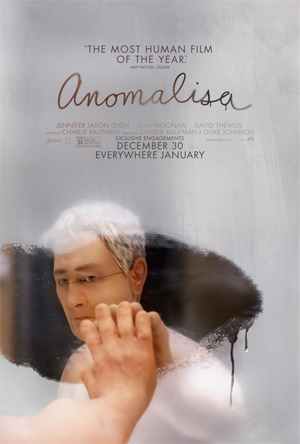 It’s Kaufman’s smallest movie. Get it, because it’s models. Seriously though, it’s very intimate, not that many locations, mostly confined to a few characters at a bar or in a hotel room, talking. This is because it was originally written for a series of live reads, a one-time performance like a radio play with live music by Carter Burwell. You know, kinda like the show they put on in the popular movie RADIOLAND MURDERS.

Producer Dino Stamatopoulos (known as “Starburns” on Community, but also creator of the cartoon Moral Orel) saw the live read and convinced Kaufman to turn it into an animated movie. Kaufman co-directed with animator Duke Johnson. But I think since he conceived it for this “sound play” medium he didn’t feel the pressure to come up with a grand concept like he would for a movie, which is probly good because how could you get grander than SYNECHDOCHE, NEW YORK? I don’t think there’s room on the earth for a concept bigger than that. So this time he just made a story about how men treat women.

Weirdly, with these puppets they managed to make one of the more realistic sex scenes ever in a movie. They’re normal people, a little chubby, but not in a comical way, they’re awkward and nervous, but into it. It’s not exaggerated or used as a joke about bad sex, and it’s not comical-because-it’s-not-real like the puppet sex in TEAM AMERICA. It’s just a sex scene.

The trouble comes afterwards. Michael (David Thewlis, THE ISLAND OF DR. MOREAU) is a nationally known expert on customer service, and his life seems to be about pretend relationships. He meets Lisa (Jennifer Jason Leigh, MIAMI BLUES) and sees her as a one-of-a-kind dream girl, while we can see that, while nice, she has nothing that should impress him. And after they decide (incorrectly) that they should spend their lives together, Kaufman brilliantly illustrates the exact moment when the magic/delusion wears off.

It’s all on Michael. This fuckin guy needs to learn to recognize his tendency to project miraculous wonderfulness onto random women and then punish them for not living up to it. Between his wife and broken-hearted ex we can see the trail of women he must’ve made assumptions about, fallen stupidly for, won over and then immediately got bored of. The women he read too much into.

Man, Kaufman is good at making characters who are terrible and don’t know it. Sometimes he makes you ask, “Wait — am I terrible?”

ANOMALISA is an absolutely unique movie. It was actually partly funded by Kickstarter, so thank you anybody who contributed to that. I appreciate it. It has also become the first R-rated movie nominated for the best animated feature Oscar. I’m sure kids would love it though and I look forward to many sequels like with ICE AGE, DESPICABLE ME, KUNG FU PANDA, HOW TO TRAIN YOUR DRAGON and etc. 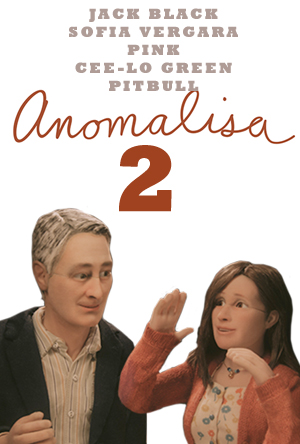 Charlie Kaufman David Thewlis Dino Stamatopoulos Duke Johnson Jennifer Jason Leigh stop motion animation Tom Noonan
This entry was posted on Tuesday, February 16th, 2016 at 12:59 pm and is filed under Cartoons and Shit, Drama, Reviews. You can follow any responses to this entry through the RSS 2.0 feed. You can skip to the end and leave a response. Pinging is currently not allowed.