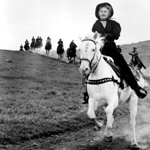 One of those brothers on the wagon is Griff Bonnell (Barry Sullivan), “a legal killer for hire” working for the Attorney General’s office. The other two brothers are his second gun Wes (Gene Barry, WAR OF THE WORLDS), and their little brother Chico (Robert Dix), who wants to help too but Griff won’t let him. I’m not sure why he brought him. Was he supposed to be babysitting? 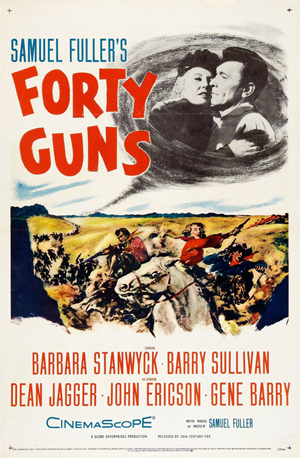 Like HIGH NOON and alot of these westerns there’s a conflict where the lawmen go after a criminal and the locals get pissed about it. Ah, that’s just old so-and-so, leave him alone. For example there’s a drunk guy named Brockie (John Ericson, HUSTLER SQUAD) who’s been threatening the city marshal Chisum (Hank Worden, who played a waiter on Twin Peaks) an old friend of Griff’s who doesn’t know what to do about it because he can barely see anymore. I don’t really get it, but Chisum is the name of a real historical figure, a cattle baron, and Worden appeared in a later movie called CHISUM with John Wayne in the title role.

Anyway Brockie shoots the poor future John Wayne character in the leg and goes on a drunken rampage breaking windows and shooting things. He thinks he can get away with it because he’s one of the forty guns and more importantly he’s the brother of Jessica Drummond (Barbara Stanwyck), that lady on the horse who owns the land and rules the town.

Then there’s Howard Swain (Chuck Roberson, THE GREEN BERETS, also in CHISUM), some guy who our guys the Bonnell Brothers are supposed to arrest for stealing mail, but he’s one of the forty guns too. And the other 39 guns don’t expect or accept anybody calling him on his shit.

This is a Samuel Fuller picture so it has a vivid way of painting Griff as a badass. The scene where he confronts Brockie is a great example. Griff just got out of the bath so he’s got a towel around his neck, and we just see him walking very resolutely toward the mayhem.

Then we see Brockie and the other yahoos wilding in the streets, and as Brockie’s stumbling around firing off shots he catches a glimpse of Griff down the street. He looks but then continues what he was doing for a second and then he kind of does a double take.

He tries to keep having fun but then it hits him what he saw. It’s as if he sees a bear down the street and can’t believe it. Or Robocop. Holy shit, that’s Griff Bonnell.

Griff just keeps walking toward him at a leisurely pace. The camera pans up from his boots to his face as he closes the distance, not in any hurry.

Then when he gets there we see that he’s eyeing Brockie’s gun. This is depicted through intercut POV shots of the gun, and extreme closeups of Griff’s eyes. He’s waiting for the hand to twitch. Getting ready to pull.

But then instead of drawing on him he just pistol whips him. Griff swung first. He tosses Brockie’s limp body in a nearby wheelbarrow so he can dump him off somewhere.

There’s alot of great filmatism in this one, a high level proficiency with the camera and the storytelling. Lots of carefully choreographed tracking shots following the characters as they walk along in front of the various sets of the western town and interact with characters sitting on porches and stuff as they pass them.

Oh, here’s a great scene. The one where Griff has sent little brother Chico away to safety while he goes on the dangerous job of catching Charlie Savage Chuck Hayward, NIGHT OF THE LEPUS). We know, but he doesn’t, that there’s an ambush set for him. He’s poking his head into this shop and calling for Charlie, but another guy is answering him. Meanwhile somebody is up in a window above watching Griff’s shadow, waiting for him to step in far enough that he can shoot him.

It’s almost like a DePalma scene in the way it sets up tension. It cuts between shots of Griff, the guy inside, the gun pointing down, other people in other buildings that are gonna hear the shot, stretching out the painful wait. Then we watch from behind the gunman in the window as he watches Griff’s shadow stepping in, and then sees his ripe juicy head moving into range, preparing to be popped like a melon.

And we hear the gunsho–

oh wait, why is that guy hanging out the window?

Oh shit, it was Chico’s gun! He secretly stayed behind, got the drop on this window guy and saved big brother’s ass!

Some pretty badass shit, my friends.

But it’s also an old style western from 1957, so it has some corny dialogue where everybody gets to explicitly state their hopes and dreams. Griff gives his brother a speech comparing gunfighters to Roman gladiators. “There’s a new era coming up, Chico. My kind of living’s on the way out.”

“For a gunfighter you do alot of talking,” Chico says.

It’s true though. It feels pretty cool walking around in your black hats and suits looking like hipster undertakers and knowing you can take on a maniac when you’re fresh out of the bath and all that, but it’s not always the greatest life. Like, don’t you hate it when you’re strutting through town in your best outfit, feeling like Shaft, getting checked out by the ladies and all that, and then…

…all the sudden you realize somebody made a window display out of the guy you killed?

It can be stressful.

That song I mentioned earlier makes it officially a musical, a singing cowboy movie, because this guy Barney (Jidge Carroll) sings it to the fellas at the bathhouse. (Later he sings at a funeral.) I don’t got a problem with that but I’m just warning you it’s not as top-to-bottom tough as some of the other Fuller pictures. On the other hand it pulls some mean narrative tricks. When Wes decides to settle down Fuller has him shot to death right there at the wedding. A wedding guest grabs a rifle and takes three shots at the fleeing shooter, but it’s no use. Fuller moves abruptly from the bride Louvenia (Eve Brent, GARFIELD) in her white wedding dress to her in her black funeral outfit. Bummer. You like that girl, too.

Louvenia doesn’t get much characterization, but it’s kinda cool because Wes meets her when she makes a gun for him. She’s the daughter of the town gunsmith and following in her father’s footsteps. She’s supposed to be the best in town. It’s a funny reason to be the ultimate dream girl but it makes sense in this world. And it makes for some funny flirting.

“I never kissed a gunsmith before,” Wes says.

Also, this next James Bond opening credits style shot here is real cute and all, but doesn’t it mean he’s pointing a gun at her face?

Might need to get these boys into a gun safety class.

Powerful Jessica Drummond is a more unusual part of the movie. She’s hardly Imperator Furiosa – being the love interest to the hero is a major part of the character – but she’s more complex than many women in westerns, and Stanwyck is good playing a cold, take-no-shit boss lady. It’s also cool just how important Fuller makes her seem with the visuals alone. In many westerns the women are vulnerable to all the lawlessness, but here’s one with a bunch of menacing bodyguards. They all eat together at a long table with Jessica at the head, and sometimes they pass notes down. They kinda treat her like a strict mother.

She’s respected and feared by all the men in the movie. At least one, Logan (Dean Jagger, GAME OF DEATH), has a hopeless, kind of pathetic crush on her. When their guy Swain threatens to blackmail her he shoots him in the spine, thinking he’s protecting her, or at least keeping things “the way they were.”  (When she rejects his love he walks into the next room and hangs himself.)

She’s in charge of this corrupt operation, but she seems to care about fairness. She won’t defend her men when they’re in the wrong, even though they expect her to. When she found out about that Swain thing she chewed him out and told him to run. (I guess if she was truly on the up-and-up she would turn him in, but at least she doesn’t protect him.)

Of course, there’s a lyric in that song about her that says “But if someone could break her and take her whip away, someone big, someone strong, someone tall, you may find that the woman with a whip is only a woman after all.” So there’s some of that old fashioned thing of showing a strong woman whose real dream is to be defanged by a man and turned into a wife. And of course she falls head over heels for big, strong, tall Griff. They have an intimate night together after getting hit by a sudden tornado (a long, elaborate sequence that comes out of nowhere). And then they still have a relationship afterwards, they don’t just write it off as the result of following Tornado Rules.

There’s a theme of choosing the gun or the family. Chisum I don’t think has a family, so he asks “Me and you only got one trade, take it away from us and what do we have?” But Griff and Wes dream of settling down, they’d rather put the guns down and have wives. They’re these cool people having adventures (envied by their little brother) but they want the white picket fence instead. UnSPOILERfortunately the dream doesn’t work for either of them.

I guess Fuller was the same way. He didn’t hang up his camera until he was in his late ’70s, even after the world misunderstood WHITE DOG and he moved to France like he’d been blacklisted or like he was Nina Simone. Nobody could take his whip away.

Thanks to Jan for recommending this and for his generous support of outlawvern.com.

Barbara Stanwyck Barry Sullivan Eve Brent Gene Barry Sam Fuller
This entry was posted on Wednesday, June 10th, 2015 at 12:37 pm and is filed under Reviews, Western. You can follow any responses to this entry through the RSS 2.0 feed. You can skip to the end and leave a response. Pinging is currently not allowed.