House Party 4: Down To the Last Minute 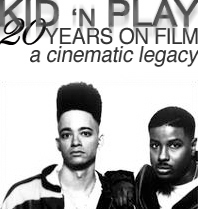 I gotta tell you, I was surprised how much I liked HOUSE PARTY 4 (aka HOUSE PARTY 4: DOWN TO THE LAST MINUTE). A clever and meticulously constructed re-invention of the orig- Nah, just fucking with you. HOUSE PARTY 4 is a terrible movie. It’s the first in the series that’s at least as bad as I figured it would be, but not at all in the same way I thought it would be. It was made DTV in 2001 with the style and production value of some cable TV show made for 11-12 year olds (who would’ve been babies when the first HOUSE PARTY came out). In fact, I think the only thing making it higher than a PG rating is a song that plays on a radio that uses the word “pussy.” Otherwise it’s safe for Saturday morning TV. 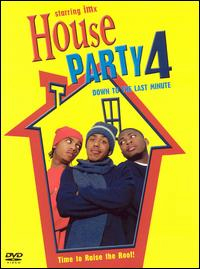 Immature, who played Kid’s cousins in part 3, are the stars this time. Well, 2 of them anyway – according to Wikipedia one of them left the group and was replaced, so it’s the new guy in part 4. And now they’re called IMx, because they’re all growed up. Weirdly, they’re not playing the same characters – now they’re friends instead of brothers, and there’s no mention of any characters from the previous movies. It’s probly less of a HOUSE PARTY 4 than a CLASS ACT 2.

The movie doesn’t follow any of the style or patterns set up in the original HOUSE PARTY. Actually it’s more of a bargain basement FERRIS BUELLER’S DAY OFF rip-off. The lead character Jon-Jon (Marques Houston of Immature) even breaks the ol’ third wall, turning and making faces at us all the time. And we’re like what, man? Don’t involve us in this shit. He badly pretends to be sick so he can skip school and house-sit for his rich record company mogul uncle Charles, and use his fancy house for the titular house party (4). His sister is mad and tries to prove that he’s faking it. He lets his friend drive his uncle’s Mercedes, it gets scratched, and they have to straighten that out before he gets home. There’s no parade lip synch, but he does get out of bed and imitate Michael Jackson’s “Billie Jean” dance. But with a Billie-Jean-esque tune on the soundtrack, not the real one.

This one is virtually hip hop free. The score is all keyboards imitating classical scoring, like on a cheap kid’s TV show or the very worst Full Moon videos. There are a few rejected-demo-tape quality rap songs played on car radios. I guess Immature matured into an R&B group instead of rappers, so when they lip synch at the party it’s a love song, they do choreographed dances and wear Britney Spears style headsets. To be fair they do look alot less ridiculous than when they were little kids in part 3.

Oh yeah, and an update on the eyepatch. That kid’s not wearing it in this one, but according to Wikipedia he really did have a detached retina because fellow singer/child star Brandy threw a book at him. It doesn’t say which book. I don’t think there was a novelization of HOUSE PARTY.

Jon-Jon is supposed to be a real charmer and chameleon, so he’s always doing unfunny shtick like smoking a pipe and talking in an upper class accent, or dressing in drag to impersonate his girlfriend’s mother and pick her up at school (Flip Wilson High School, because Flip Wilson also thought it was hilarious to wear a dress). But don’t worry, in case that seems a little gay to you they make sure to follow it up with some stereotypes in a bunch of scenes involving an airline called “Gayway Airlines.” I’m not clear what the joke is supposed to be other than that there are gays who are gay, etc. But it might be a way of saying “no, don’t worry homophobes, we’re on your side. Dressing in drag goes back to the days of Shakespeare and Bugs Bunny. We acknowledge that grand tradition but we can still make fun of gays with the best of ’em.”

For some reason the movie also feels it’s important to follow the family members that are not at the house party, especially the uncle, his wife and crazy mother who are supposed to be going on vacation. But their second flight gets canceled, and the mom is drugged by a serial killer, and they “decide to come home early” in the same day, but don’t seem that disappointed that they spent all day flying to Florida and back and didn’t get a vacation.

The only thing that really is in the tradition of the original HOUSE PARTY is that it makes no sense how the school operates. There’s a nerdy white lady teacher who goes to Jon-Jon’s house to bring him his homework because he missed class – why would she do that? Well once she gets there it seems like maybe she’s supposed to be the mean principal character from FERRIS BUELLER, but if so it’s not explained why she has a vendetta against him. Also I suspect that it’s supposed to be funny that she keeps adjusting her glasses?

There are only about 3 or 4 characters in the movie that aren’t constantly doing or saying things that can only be interpreted as wildly off target attempts to be funny. For example Uncle Charles is real scared of flying, he hides under a blanket and screams, etc.

Writer/director Chris Stokes plays a tow truck driver wearing a terrible grey wig and fake mustache like he’s in the “Sabotage” video, and the joke is (this is rich) he has two daughters that are really fat. And they’re played by the twins who played the son in THE KLUMPS. And the boys have to dance with them. And they’re gonna eat all the food at the party. And they all do a funny dance together.

The other two Immature guys besides the main guy actually aren’t bad, they play everything straight and come closer to being funny. Like they’re pretty good in the scene where they rear end somebody and try to take full responsibility but are mistaken for carjackers. If I had to pick something in the movie that came closest to being funny, it would be when one of those guys, the one who drives an old beater, complains about the blinkers on nice cars blinking too fast. Sorry, that’s all I got.

The last line of the movie (besides bloopers during the credits) is “Sequel!” And most people at home will yell “No thank you!”

Writer/director Stokes apparently started as a music producer and executive, where he made a hit single for his 14 year old sister and also worked with Immature. He’s made Houston the De Niro to his Scorsese, exclusively directing movies that star him: this, YOU GOT SERVED, SOMEBODY HELP ME 1 and 2, and the upcoming BOOGIE TOWN. This other kid he produced, Omarion, is also in most of those (is he Joe Pesci?) So Stokes is building a film movement around his stable of teen R&B stars.

But why is this a HOUSE PARTY sequel, just ’cause two actors from part 3 are playing different characters? Then why isn’t FRIDAY considered a HOUSE PARTY sequel? It’s kind of like FRIDAY THE 13TH: A NEW BEGINNING, except instead of a copycat Jason it’s a copycat Immature. I really wouldn’t recommend this movie to anybody, but I felt it was important to see as part of this research. Now that I realize how little connection it has to the original movies I think it’s okay to consider HOUSE PARTY a trilogy, even if it comes in a box set with this similarly-yellow-packaged bonus disc.

EPILOGUE TO THE EPILOGUE: They later made a fifth HOUSE PARTY movie, HOUSE PARTY: TONIGHT’S THE NIGHT, which I reviewed HERE.

DTV DTV sequels sequel in name only
This entry was posted on Saturday, December 18th, 2010 at 8:21 pm and is filed under Comedy/Laffs, Reviews. You can follow any responses to this entry through the RSS 2.0 feed. You can skip to the end and leave a response. Pinging is currently not allowed.

17 Responses to “House Party 4: Down To the Last Minute”