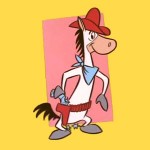 Now some of you may know, but I sure didn’t, that Tom Laughlin made one non-Billy Jack movie after the success of BILLY JACK. And it was this. He wrote it under a pseudonym and apparently the director is his son Frank. It’s a western, but with much of the cornball liberal action movie tone I loved about the BILLY JACK pictures. It is about to come out on video and I think dvd for the first time ever. 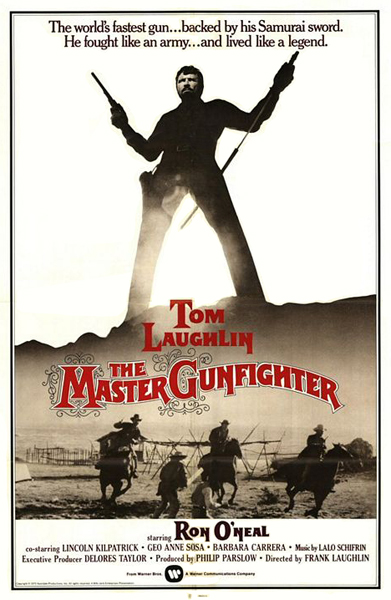 Now first of all let me say that I checked the reviews on IMDB (a sight I defeated roundly in the Cinemarati Best Film-Related Web Sight 2001 competition I might add) and they all seem to hate it. But fuck those bastards. If you like the Billy Jack movies, which you do, you oughta like this.

What really makes it stand out from other westerns is a great scenario with a sense of moral outrage but also a good motivation for the villains. And since it’s a Tom Laughlin picture it touches on that whole genocide thing that generally is swept under the rug or given a whitewash in westerns.

Laughlin plays Finley, who is alot like Billy Jack – he even wears a similar hat in the opening scene. He’s got the same quiet approach to asskicking, the same I’m-a-pacifist-but-I-guess-if-you’re-gonna-be-that-way Badass persona. And I think what makes these two characters great action heroes is that they genuinely have a strong sense of morality even when the odds are against them. There are alot of heroes who really believe they are doing the right thing, but generally they have most of the police force or the army or at least the common man on their side. Or maybe he’s framed so he has to prove his innocence and then you know at the end everybody will understand that he’s the good guy.

Finley doesn’t have that luxury. He’s basically a conscientous objector, a guy who won’t go along with everybody else because he knows he couldn’t live with himself. He is the one guy who takes a stand against something his people are doing that he knows is wrong. He’s that one cop who tries to stop all the other guys when they’re beating up on black people or wto protesters. Or he’s like Hugh Thompson, the american soldier who was given a medal 30 fuckin years later for stopping short the Mai Lai Massacre (article – interview). I know that story meant alot to Tom Laughlin because he mentions it on the commentary track for one of the Billy Jack movies, and of course there was the whole flashback that showed Billy Jack in the same kind of situation.

Well MASTER GUNFIGHTER puts Finley in a similar moral quandary type deal on the California coast in 1836. His brother-in-law and close pal Paulo (played by Ron O’Neal, who you know as Priest from SUPERFLY) is a Spanish don who might lose his land because he’s being taxed to death by the american government. So he comes up with a clever plan to steal a shipment of american gold that they will use to pay the taxes. Good plan, right, and Finley’s not necessarily against it. But the only way to hide this caper from the feds is to massacre the small native american fishing village where the robbery takes place. Finley finds out too late, fails to stop it, and decides to leave the hacienda in shame, abandoning his wife to be a travelling gunfighter. So he gets framed for the robbery.

No big deal for a master gunfighter, but then it gets back to Finley that the caper was so successful, they’re gonna do it again, and ANOTHER massacre is gonna have to take place. So he has no choice, as a highly moral action hero, but to come back and see what he can do to stop it.

One area of improvement over the BILLY JACK trilogy is in the villain department. Those movies had hissable white racist villains, but Paulo is a more complex and charismatic one. Complex because he has a good motivation. He really is being screwed by the american government and he is pretty justified in his plan to steal the gold. And even in the massacre department, he rationalizes just like real people do, claiming that more people will die from his hacienda if he doesn’t do it then will die from the village if he does. In his eyes, he is not a bad guy. He does not cackle or get glee from opposing Finley. In fact he tries to pay him off, and gives him chances to get away. He really doesn’t want to kill him, just like Finley or Billy Jack really don’t want to have to beat up all these rapists and racists they’re always getting into showdowns with.

And then of course the charisma comes from Ron O’Neal. It’s great to see Priest in a role like this, with a decent Spanish accent and a real aristocratic air. I liked the dude.

It should also be noted that there is a weird multi-cultural theme to the movie. Of course you got the spanish dons, a few americans (including Finley) and the native villagers. You’ve got an african-american fellow whose hair and sideburns look suspiciously 1970s. But I guess things do go in circles, maybe Afro Sheen was popular for a while in the 1830s and then came back in the 1970s, I don’t know. Anyway he’s a pretty interesting character whose motives aren’t always transparent and he fits right in. Where it gets weird is the asian influence. It is mentioned offhand that Finley trained in asia, so not only is he a master gunfighter with a rare 12-shooter gun, but he’s also a master of the samurai swordfighting style. In fact, although he is technically a master gunfighter, he uses his sword alot more often, including in the climactic battle. So it’s like if RAIDERS OF THE LOST ARK was called MASTER ROCK DODGER.

And then there’s some other dude, I didn’t really catch what relation he was to Finley, but he’s a white dude who has samurai hair and a Sam Neill mustache. That dude made me kind of uncomfortable. But I guess it’s cool.

In some ways the filmatism is not as rough as in the Billy Jack pictures. I mean its not on the level of Sergio Leone, but they seem to know what they’re doing. The setting makes for very different western scenery. Almost the whole thing takes place along the beach, with huge waves splashing in the background and light shimmering on the surface of the water. One scene is in a lush forest. There are no cactuses. The score is by good ol’ Lalo Shifrin, and it’s pretty nice.

I think Tom Laughlin’s performance is a little less convincing. It gets heavy handed because he expresses his outrage verbally a few too many times. If I were not retired from drinking, the drinking game for this one would be to drink a shot every time he says the phrase “women and children” with his eyes about to well up. I don’t mind it but a more powerful approach was in FIRST BLOOD when it was all hidden down there in the subtext, left unspoken until one long emotional outburst at the climax. Especially for a stoic character, he points out the injustice with words a few too many times.

And he looks a little chunkier. Or maybe it’s just the beard.

Also I could’ve done without the narration at the beginning explaining that it is a mixture of legend, historical fact, and historical interpretation. We coulda figured that out.

This is definitely a very unique twist on the western and I’m very glad they are bringing it to light now. If you are interested in this type of picture I think you will enjoy it.

Ron O'Neal Tom Laughlin
This entry was posted on Wednesday, January 1st, 2003 at 11:42 am and is filed under Reviews, Western. You can follow any responses to this entry through the RSS 2.0 feed. You can skip to the end and leave a response. Pinging is currently not allowed.

2 Responses to “The Master Gunfighter”